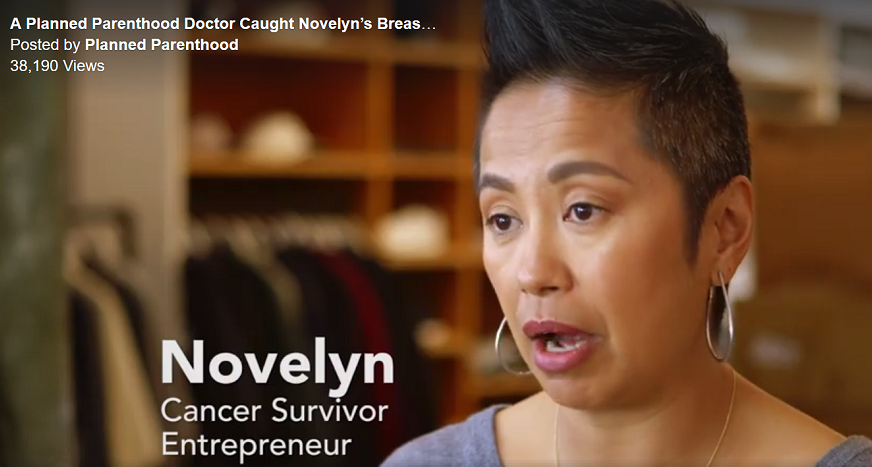 Planned Parenthood is in the business of abortion and in the business of pretending that scores of women rely solely on Planned Parenthood centers for legitimate healthcare services — some of which very few of their locations provide (like prenatal care), and even services which none of their locations provide, like mammograms (which even the organization’s CEO lied about for years).

More of the abortion giant’s dishonesty is seen in a recent video on the Planned Parenthood Facebook page. It features the story of Novelyn, a cancer survivor. Any time someone survives this deadly disease is a time to rejoice. Unfortunately, the video doesn’t tell an honest story about Planned Parenthood and its services.

Planned Parenthood has misled and lied to the public before out of desperation to hold on to half a billion dollars in taxpayer funding, which has also increased (along with abortions), while life-saving services decrease. If Planned Parenthood truly cared about women’s health, they would gladly step aside so that the Federally Qualified Health Centers (FQHCs), which outnumber them by the thousands, could step in to take that money and take care of patients.

In the video Novelyn discusses being “an example” to her daughters — and as a cancer survivor, she certainly is! But what’s unfortunate is that she’s chosen to use her story as fodder for Planned Parenthood, by a scandal ridden organization which is desperate to hold on to its taxpayer funding, to further mislead the public. Novelyn even adds that “if someone doesn’t understand what they do,” meaning Planned Parenthood, “then I tell my story.”

Planned Parenthood is not in the healthcare business. It’s certainly not in the business of saving lives. It’s in the abortion business. Don’t let the propaganda fool you.