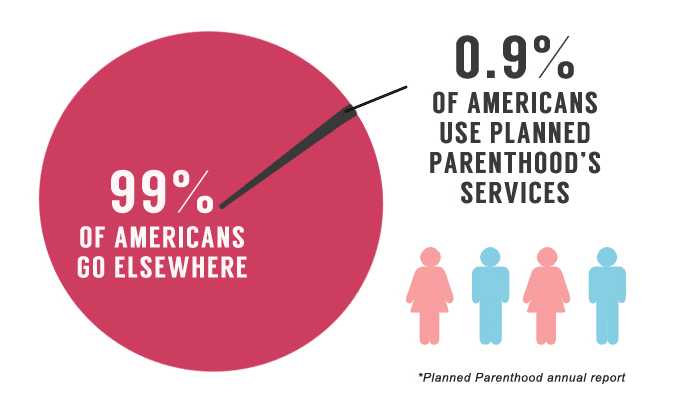 Planned Parenthood claims to represent the welfare and interests of women, but how do the facts and figures add up?

Live Action created some helpful graphics to illustrate the fact that most Americans do not depend on Planned Parenthood. The abortion giant receives $1.4 million a day—over $500 million a year from taxpayers, and it has steadily obtained more taxpayer dollars over the years.

But this money need not fill the coffers of Planned Parenthood, who, in many ways, behaves more like a wealthy corporation than a non-profit. There are over 13,000 comprehensive health clinics across the country that can, will, and already do serve women and their families. These effective clinics could do so much more if the $1.4 million a day were redirected to them. While Planned Parenthood touts its clientele, that figure has drastically gone down over the years, and it pales in comparison to the amount of patients served by comprehensive health clinics, which outnumber Planned Parenthood facilities 20 to 1. The abortion business has lost over 400,000 clients since 2006, according to the organization’s annual reports.

In fact, most women currently do not depend on Planned Parenthood. Based on the group’s own annual reports, 98 percent of women in the U.S. will never visit a Planned Parenthood facility in a given year. Women’s health care will not be negatively affected if the flow of taxpayer dollars to the group is cut; however, health care will actually improve when the money is channeled more appropriately to these comprehensive health clinics. The numbers are even more revealing when it comes to basic women’s health services, such as breast exams. Planned Parenthood claims it provides this critical service for women; however, the abortion business has steadily cut health services, while increasing abortions. Only 0.8 percent of women of reproductive age went to Planned Parenthood for a breast exam last year, according to the group’s own numbers. These numbers show why it does not make sense for the federal government to pour $1.4 million a day into an organization that perpetuates a litany of human rights abuses. If we wish to fund women’s health, it’s time to redirect Planned Parenthood’s funding into the clinics that truly serve women.