Patricia Sandoval had three abortions, then went to work at a Planned Parenthood abortion facility. When she started her job, she knew very little about what really happened during an abortion. Workers had lied to her about fetal development when she had her abortions.

Before Sandoval witnessed an abortion at her new job at Planned Parenthood, the facility’s director took her aside and told her, “Don’t ever, ever tell anybody – not even your friends or relatives – about what you see there in the back.”

Sandoval was also trained not to use certain words with the women who came in considering abortion. Such “forbidden” words included “mother,” “father,” and “baby.” But when warning Sandoval, the facility director used those words. She said:

Never tell the mothers and never tell the fathers who are sitting out in the waiting room what you see behind those closed doors. If the women who came into the clinic ask you what we do with the babies, never tell them that we basically throw them in the garbage.

Sandoval witnessed a first-trimester suction aspiration abortion. Afterward, she was asked to examine the remains:

After that abortion, the girl training me grabbed the bag with the bloody contents in it, and we went into a back room. ‘We need to find five parts, and we need to find them fast because the patient can’t leave the room until we do. Then we can tell the doctor that the abortion was successful.’ On top of the counter lay a huge petri dish. As my trainer opened the bag and emptied out the contents onto the container, blood splashed around us and on us …

[W]ith a pair of tweezers, she navigated through the body parts, lifted up an arm, and held it up to the light. Terror seeped into me as I stared at the hand, its knuckles, the lines on its palm, and its tiny nailed fingers spreading out. ‘Here’s part number one,’ she said mechanically. Pushing it aside, she clamped her tweezers around the belly with the umbilical cord still connected and a leg dangling in the air beneath it, with knees and toes intact. I could see the little hairs on the skin, the nails on the toes. ‘This is the second part.’ Then she looked for the second arm and held it up, exposing an upper arm, elbow, and forearm. ‘Number three.’ She set it down, and her tweezers squeezed another leg: ‘Number four.’ Then she found the head and lifted it up in the air. I could see the eyes, the eyelashes, the nose, even the eyebrows that had begun to form. The mouth was hanging wide open. ‘Part number five. Success.’

Sandoval’s reaction was one of horror:

I was aghast. Agonizing thoughts blew through my mind faster than I could suppress them. This was actually a human being. This abortion had been done at three and a half months gestation. My first abortion happened at four. 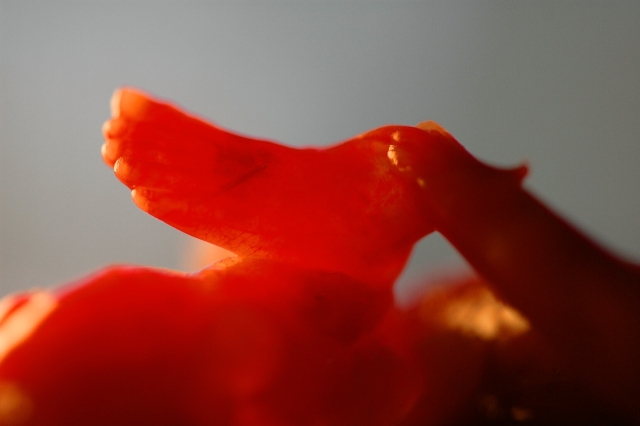 Foot of baby aborted at 16 weeks. From Citizens for a Pro-Life Society.

Sandoval was shocked even more at the matter-of-fact, unemotional demeanor of the abortion workers, who calmly sorted through the body parts of aborted babies:

What startled me even more was seeing the human being in front of me had no emotion. While sorting through body parts, the other women in the clinic also wore blank, robotic faces and discussed what they were going to have for lunch. Meanwhile, the doctor would bounce in and out of the room in a jolly mood.…

I searched for the parts of more than 20 babies that day. Some of the body pieces were very small, some very big, and some were huge, the size of a baby born premature. Most of them were well-formed. All the while, the staff acted like all this was normal, even cool.

Unfortunately, Sandoval kept working at the facility, despite her misgivings and the guilty feelings she had.

The day Sandoval left the abortion facility, the owner was excited because a teenager was scheduled to have an abortion at six months, and the girl was pregnant with twins. A very late-term abortion meant a large amount of money for the facility. Sandoval, already troubled by what she was doing, called a friend in tears from the parking lot. The thought of doing an abortion that late, and on twins, horrified her. She could barely imagine how large and well-developed the pieces of the babies would be. She didn’t think she could stand handling those body parts. Sandoval’s friend urged her to leave the facility and quit her job. Sandoval left the abortion industry for good.