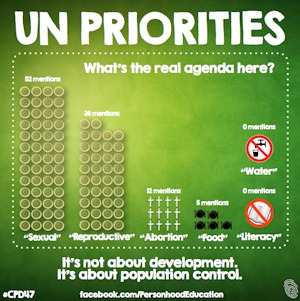 Twenty years ago, diplomats from around the world met in Cairo to draft a platform of action for encouraging economic development and meeting the needs of the global population. At that conference, radical special interest groups–including the International Planned Parenthood Federation–sought to establish an internationally-recognized “right to abortion” and impose population control programs upon developing populations. Despite some gains in the outcome declaration, these pro-abortion groups failed to achieve their ultimate goals.

Since 1994, the United Nations has held review conferences to evaluate progress on the Cairo platform for action. Each conference on population and development is basically the same: every year, the same developed regions such as the United States and the European Union try to push population control on developing regions by threatening to withhold aid money or otherwise twisting their arms; the same pro-abortion lobbyists show up to U.N. headquarters to push for more abortion around the world; and the same U.N. agencies themselves are actively complicit in this desperate and deadly enterprise.

Since 2011, I’ve monitored these conferences and worked with the pro-life coalition of NGOs and nations dedicated to protecting life. Together, we’ve worked to encourage respect for the dignity of the human person. And I’m happy to report that our coalition is successfully preventing the forces of death from advancing their agenda.

Last week was the 20th Anniversary of the Cairo agreement, yet Planned Parenthood and their cronies have been unable to advance beyond the agreed language of 1994. There is still no “right to abortion” in international consensus and human life remains protected in many countries around the world.

But that doesn’t stop them from trying. Hundreds of “youth activists” are bussed into New York, claiming to represent all 3 billion of the world’s young people, to demand “sexual rights” detached from parental involvement and free abortion. Many of the Nordic countries and European Union members echo the siren song. During the monotonous oral statements I listened to (which numbered no fewer than 100), I lost track of how many times “sexual and reproductive health and reproductive rights” was mentioned. But you could probably count on your fingers the number of times pressing development issues like clean water were mentioned.

At one point last week, the document being negotiated by national delegations was chock full of references to “sexual rights,” “sexual and reproductive health services,” and “reproductive rights” (code at the U.N. for abortion). In fact, the document referenced these topics 20 times more often than it mentioned food! It never referenced clean water or literacy. Strange emphasis for a document purportedly dealing with global development, isn’t it?

Thankfully, at the conclusion of negotiations, many of these offensive references were deleted by the Chair. While not perfect, last week’s outcome document was yet another setback for Planned Parenthood and pro-abortion lobbyists at the U.N.

Despite the hundreds of self-proclaimed “youth activists,” the self-appointed experts brought in by the International Planned Parenthood Federation to call for “safe abortion,” and the intense pressure put on developing nations by countries like the United States, the document failed to lend much, if any, ground to pro-abortion forces. It’s nice to get good news from the United Nations every once and a while, right?

Last week’s experience shows why it’s so essential that the pro-life movement continues to stand in the gap at the U.N., in order to prevent them from imposing their pro-abortion agenda on the rest of the world. Our coalition is small, but effective. We are a thorn in Planned Parenthood’s side.