Planned Parenthood is supposedly a “non-profit” organization. But Jill Stanek has uncovered an interesting tidbit from Planned Parenthood’s 2012 IRS Form 990: CEO Cecile Richards is pulling in over half a million dollars a year. 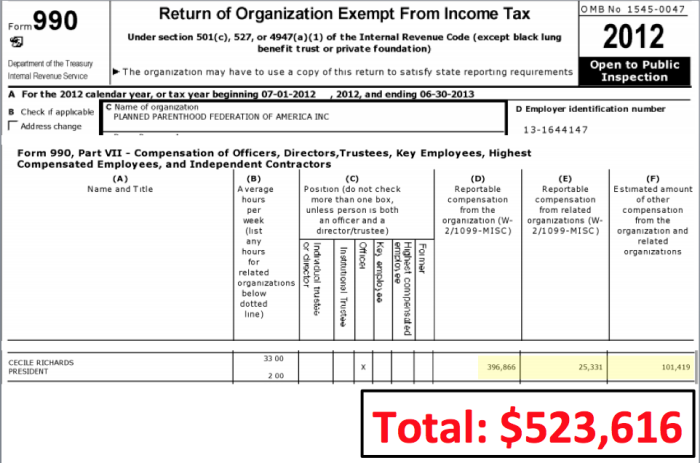 When questioned by The Daily Caller in October 2012 about what was thought at the time to be an “almost $400,000 salary,” Richards responded, “None of my salary is paid for by the federal government.”

That’s such a joke. The government may not literally be writing Richards a check for her salary, Planned Parenthood still receives over $500 million a year in taxpayer funding, $1.5 million a day. This makes up a little less than half of their revenue. So no, she may not personally be getting a check from the government. But it’s just splitting hairs to say that she doesn’t receive money from taxpayers.

Meanwhile, as they so often like to brag, many of their patients are low-income women, often on Medicaid. But that doesn’t change the amount they charge for abortions, of course — abortion is what brings in the big bucks for them. After all, we know what happens when women stop having abortions: clinics close.

Richards campaigns heavily for pro-abortion candidates, even bussing protestors to places like Texas in support of politicians like Wendy Davis. And she’s rewarded with half a billion dollars in government funding and a fat paycheck. Is it any wonder that the abortion industry fights tooth and nail to keep that government money rolling in? After all, they couldn’t afford to pay their CEO so well without it.