Planned Parenthood responded to Live Action’s new investigative report that reveals the abortion chain’s pattern of helping child sex abusers cover up their crimes. Live Action released the first part of a docuseries which features court cases concerning Planned Parenthood’s unreported sexual abuse of children. The cases went into explicit detail. The abortion chain has been caught repeatedly committing abortions on abuse victims as young as 12 and 13 years old, failing to report the suspected abuse and returning the victims to their abusers.

In response to Live Action’s mountain of evidence, according to Politico, Planned Parenthood has stated that “Live Action’s report draws on discredited evidence.”

In a Tweet last night, Live Action responded to Planned Parenthood about this so-called “discredited evidence”: 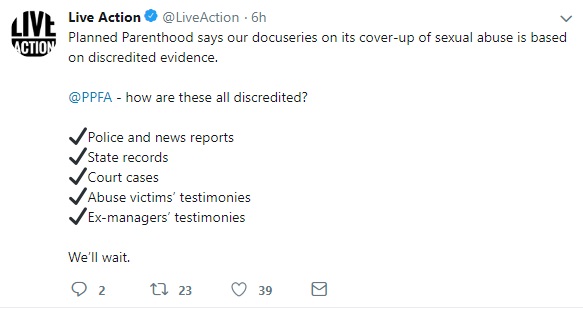 Live Action’s evidence is public and available for anyone to see. Below is a sample image from just one of the horrific criminal cases unearthed in Live Action’s investigation. It shows that the victim of George Savanah suffered years of additional abuse. This was due in part to Planned Parenthood’s willingness to turn a blind eye to victims. (Read more on this case here.) 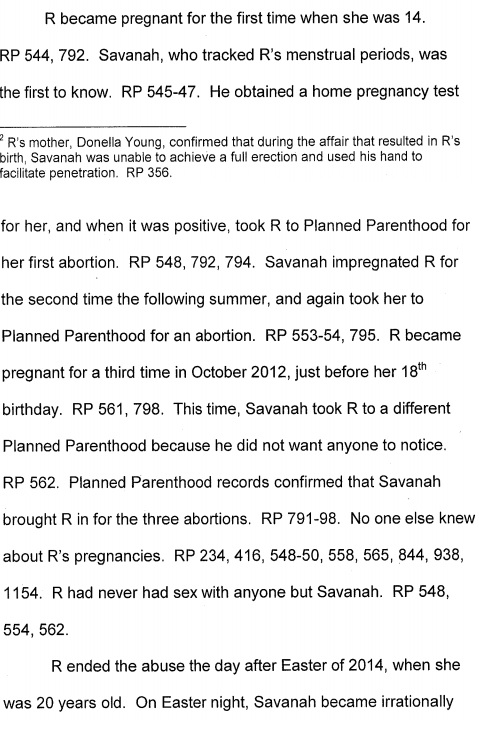 When Planned Parenthood calls our report “discredited,” they are attacking the testimonies of the very girls who endured horrific abuse and then had it covered up by their own abortion centers.

Planned Parenthood has said repeatedly that victims of sexual abuse should be believed, yet when they call these cases that are documented in court records and media accounts “discredited evidence,” they are calling the victims liars, just like their abusers did. At a time when Planned Parenthood’s ‘Don’t ask, don’t tell’ policy on sexual abuse continues to put girls in danger every day, their callous attempt to discredit victims and their stories is especially abhorrent.

In today’s #MeToo and #TimesUp climate of intolerance against complicity in covering for sexual abusers, it is no surprise that Planned Parenthood is pointing a finger not only at Live Action, but even more disturbing at the very victims the cases represent.

We were all required to be mandatory reporters, but, if we saw a case – questionable abuse or even for sure, I mean, this kid is being abused – we really were discouraged from calling it in, just because they didn’t want to have the trouble – the angry parent, the angry boyfriend, whatever it was. So, more than once I was told, ‘No, that is not reportable. You don’t need to call it in.’

Monica Cline, a former health educator who worked with Planned Parenthood in Texas and New Mexico, shares this:

[Planned Parenthood workers] adopted George Bush’s ‘Don’t ask, don’t tell’ [policy]… If we don’t ask how old her partner is, we don’t have to tell. And so Planned Parenthood actually allows victims of human trafficking to continue to be victims of human trafficking. And they’re okay with that. I went back to my office and I told my supervisor, listen, I’m trying to teach them about key concepts on Title X; they’re admitting that they’re not going to report cases of statutory rape.

In addition, Ramona Treviño, a former Planned Parenthood manager, discusses what the abortion corporation really did after it was caught aiding people posing as human traffickers:

I raised my hand and I said, ‘I’m confused, when are we going to actually begin the retraining? What can I do as a manager to take this information back to my staff and enforce policies and procedures that would help protect women who are experiencing either sex trafficking or sexual abuse in any way?’ [The trainer] immediately shot me down and she said, ‘We’re not here to talk about that, Ramona. We’re here to teach you how to identify if you’re being videotaped or recorded or entrapped in any way.

As more details of the horrific criminal and civil cases come to light through this docuseries, the American public will see if the typically silent complicity machine surrounding Planned Parenthood responds to this evidence.

It is not Live Action’s evidence that is discredited, but Planned Parenthood.