Claims of abortionists fearing for their safety fell apart in court

According to Terrisa Bukovinac, founder and executive director of Pro-Life San Francisco, Moran described himself as a “private person” and claimed that he was afraid for his safety if he were to be publicly identified as an abortionist, however, defense attorney Horatio Mihet proved this not to be the case. He pointed out to Moran that he signed a public pledge online to be a “clear and loud voice for abortion rights,” pledging to provide abortion.

“Counselor, you got me,” said Moran.

Mihet also pointed out that Moran is credited as a contributor to the Early Abortion Training Workbook by UCSF’s Bixby Center, available online. Moran said he would not remove his name from that, proving that having his name attached to the abortion industry was not really a concern of his. When asked that there was “nothing the defendants did to out you as an abortion provider, correct?” He replied, “They outed several of my colleagues.” However, he said despite the fact that CMP was never able to publish the undercover video that featured him, Moran said it still made him “anxious.”

“The one thing you were anxious our defendants would do… you voluntarily did yourself in open court,” said Mihet.

Another Planned Parenthood doctor contradicts herself

Drummond-Hay, who was in undercover footage filmed by CMP at the 2014 National Abortion Federation conference, took the stand next. She spoke about having worked in two different abortion facilities which she said were firebombed in the late 1970s and early 1980s. Pro-Life San Francisco’s Bukovinac told Live Action News that Drummond-Hay also claimed she was “wandering around with my little cheese and wine” at the NAF conference when David Daleiden of CMP became “very persistent” in attempting to get business connections from her. Bukovinac said Drummond-Hay told the court that she found the conversation with Daleiden to be odd because he brought up money immediately and she thought, “What does money have to do with fetal donation?” But it didn’t take long for the defense to prove Drummond-Hay was misleading the court.

Drummond-Hay also admitted in the video that she did not use digoxin to stop the heartbeat of preborn babies before removing them from the mother’s womb. Therefore, she either killed living preborn children by dismembering them or induced preterm labor, which could result in born-alive infants. She also can be heard saying she gets a lot of “intact specimens” which means she did induce preterm labor. During her testimony, she said that her ability to procure intact preborn children for researchers earned her “oohs and aahs” from StemExpress, said Bukovinac in a statement to Live Action News. Bukovinac said:

Drummond… testified that she was able to get a lot of ‘intact specimens’ … which resulted in “oohs and ahhs” from StemExpress. She also bragged to David on camera about obtaining four intact limbs. Jonna asked Drummond “Did you get oohs and ahhs from StemExpress because they were impressed with how intact they were?” She replied, “I think they were oohing at the specimen.”

Defense attorney Vladimir Kozina addressed the fact that Drummond-Hay said she was concerned about her privacy as an abortion provider and that she used two names — one for work and one for personal use in order to protect herself. However, her name is listed on several medical reference websites as an abortion provider. 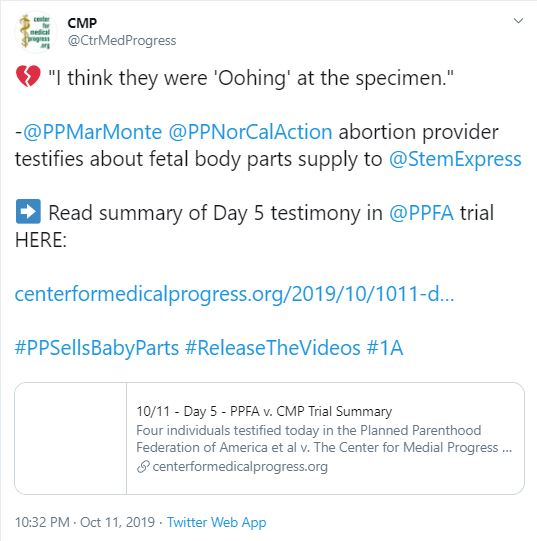 “She painted a grim picture of the time following her affiliate’s medical director, the now infamous Dr. Mary Gatter’s appearance in the second video released in July 2015,” said Bukovinac. “She described hiring an armed guard for Gatter and talking with staff who she says had expressed heightened anxiety after the release. […] She said she discontinued the armed guard after a week of zero incidents of threat against Gatter. Planned Parenthood is suing for the cost of the armed guard along with the cost of a subscription to reputation.com, an internet company that helps manage online reputations by flagging and deleting sites mentioning a specific individual.”

According to Court House News, Planned Parenthood paid $6,105 for that 24/7 armed guard to protect Gatter. Bonner also stated that no one reprimanded Gatter for sharing confidential information. Peter Breen of the Thomas More Society defending CMP said, “You have zero evidence that these defendants threatened physical harm to Dr. Gatter.” Bonner replied, “That is true.” She confirmed her Planned Parenthood affiliate did not receive any threats.

The trial will resume on Tuesday, October 15 in San Francisco. Daleiden and CMP colleagues Troy Newman, Albin Rhomberg and Gerardo Adrian Lopez are being accused by Planned Parenthood of fraud, breach of contract, unlawful recording of conversations, civil conspiracy and violation of the Racketeering Influenced and Corrupt Organizations (RICO) Act.