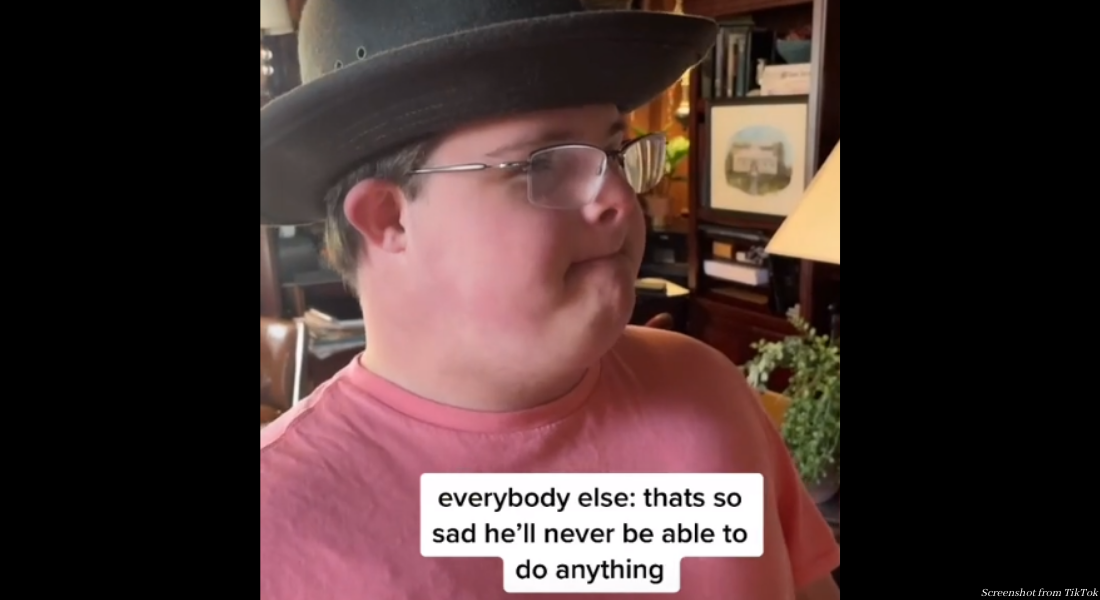 Houston Vandergriff is a 23-year-old photographer who has traveled the world. He’s been to 48 states, almost 30 countries, and won awards for his work. He’s even dabbled in acting, appearing on an episode of the true crime show “Homicide Hunter,” as well as modeling. He also has Down syndrome, and a recent TikTok where Vandergriff showed how he proved all the naysayers wrong has gone viral.

In the video, Vandergriff does a riff on a popular trend, where the “Bongo Cha Cha Cha” audio is accompanied by stories of how creators have surpassed expectations. Starting in a white lab coat, Vandergriff mimes talking, with a caption reading, “The doctors to my parents: we’re so sorry your son has Down syndrome.” He then continued miming, this time mimicking people who didn’t believe in him. “Everybody else,” the next caption read. “That’s so sad he’ll never be able to do anything.”

Vandergriff then danced with his tongue out, holding one of his photographs, and wrote, “Me at 23 years old, being an award winning travel photographer who has been to 26 countries.”

His photography has also won awards, the first award being a portrait of Dolly Parton which won first place at the Tennessee Valley Fair. “I guess you can say that Dolly Parton started my photography career!” he joked on Instagram.

According to the Down Syndrome Diagnosis Network (DSDN), the experience Vandergriff’s parents’ had was far from rare. Heather Bradley, a member of the Board of Directors and former president of DSDN, spoke out about an experience she had at an ACOG District meeting in Wisconsin.

“In speaking with a Maternal Fetal Medicine specialist from Minnesota, he said that delivering a Down syndrome diagnosis was like giving someone a ‘crap sandwich,’” she wrote on Facebook. “When a new or expectant parent is just told the news their baby has Down syndrome and the first words are ‘I’m so sorry’ or ‘When should I schedule the termination?’, what is that physician saying about their CHILD? It most definitely tells them that their child IS a ‘crap sandwich.’”

The DSDN “Dear Doctor” campaign likewise exposed how parents receive a diagnosis, and the experiences were overwhelmingly negative. It has been reported that only 11% of women have had a positive diagnosis experience, while 13% of doctors admitted to purposely emphasizing the negative aspects of Down syndrome in an effort to convince parents to have an abortion.

Yet for his parents, Vandergriff has been able to achieve so much simply by being who he is, and he isn’t held back by having an extra chromosome.

“He has a big personality he doesn’t meet a stranger, he has so much joy and so much love in his heart for people. He’s definitely a people person,” Katie Vandergriff, his mother, told WBIR. “We’ve been very blessed to be able to travel and do things and he just opened so many doors, you know, again, he never meets a stranger. It doesn’t matter the language, it doesn’t matter the anything, he just he loves everybody.”

His father told WVLT that having Down syndrome helps his photography, not hurts it. “People will open up and it is like a superpower,” he said. “It’s a power we don’t possess and he’s willing to meet people and introduce us to the world that we wouldn’t otherwise get to see.”