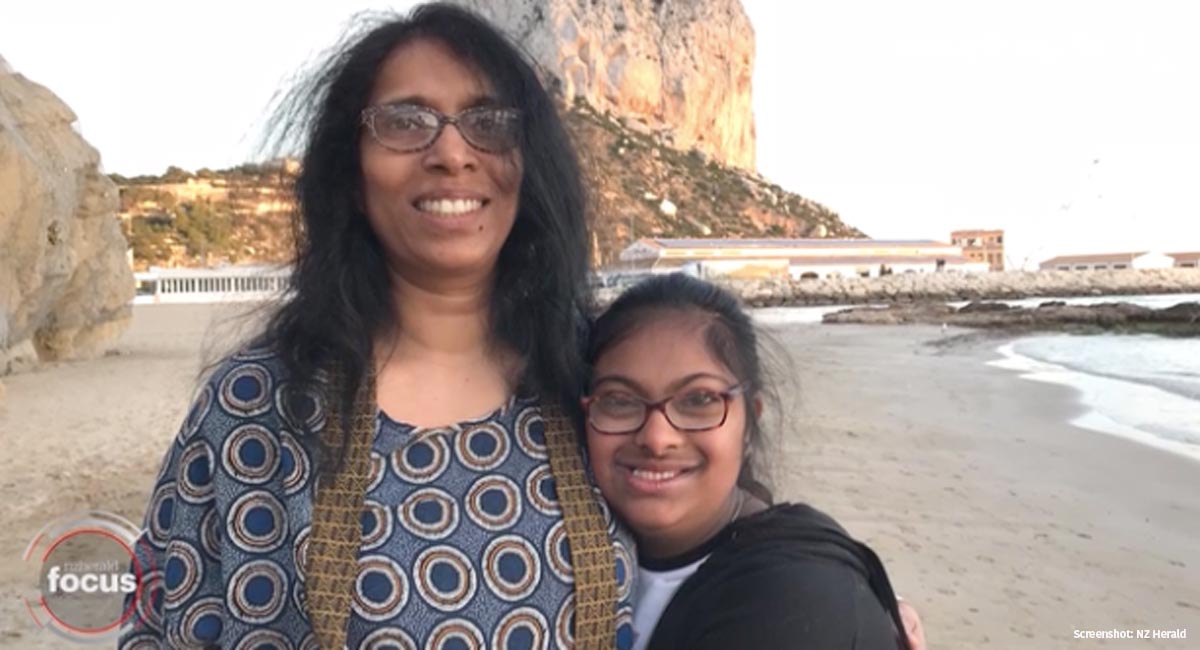 A British family hoping to immigrate to New Zealand after landing a job opportunity has had their dreams crushed after one of the family members’ visa applications was denied. The reason? Because one of their daughters has Down syndrome.

Nilani and Nagarajah Suhinthan, originally from Sri Lanka, moved to Britain in 1990, and currently live in Dublin with their three daughters. Nilani, an IT specialist, was recruited for a job in New Zealand, and she was eventually offered the position. So she moved to Auckland to prepare for the job and begin the immigration process. But a month before the family was scheduled to move, their daughter Bumikka’s visa application was declined. Her husband and her other two daughters all had visa applications that were approved.

Originally, there seemed to be some hope; the family appealed the decision, and were told they could get a temporary visa so they could at least spend Christmas together. So they booked a flight and set off from Ireland, only to be stopped in Malaysia and refused entry onto their connecting flight — again, because New Zealand saw Bumikka as not welcome in their country. Nilani, understandably, is furious, and is speaking out so other families don’t go through what she has.

“It’s complete discrimination. I’ve always told her she isn’t any different but this tears it up,” Nilani said to the Daily Mail. “She doesn’t completely understand why we’re not going to New Zealand. They kept telling me she would cost them money to send her to a special school. My tax bill in one month would cover the school fees for the entire year. It just doesn’t make any sense other than it being discriminatory. Bumikka has a moderate disability, but she can talk, walk and dress herself. She only needs supervision and extra help in the classroom. So I don’t understand why they would reject her temporary visa other than being discriminatory. We were planning a new life over there. Instead we were just thrown in limbo.”

Bumikka, who is 15, would not be allowed to move to New Zealand but, disturbingly, her entire family could have moved without her — as if immigration officials expected a 15-year-old to be left behind in another country. They claimed that, because she has Down syndrome, she does not have an “acceptable standard of health” and would “impose significant costs” on the country’s health and education services, even though the Suhinthans said they would pay the extra.

“The car I bought over there is just sitting in my sister’s driveway,” Nilani said. “I couldn’t just leave her in Ireland and move my other children to the other side of the world.”

Nilani, who has given up her job in New Zealand and is moving back to Dublin, called the situation the hardest thing she’s ever done. “I am just extremely disappointed,” she told the Mirror. “I thought it was a nice place and a lot to offer for me and my family. I accepted the job after four of us had our visas accepted … [f]or someone to be rejected from a western country purely because she has Down’s Syndrome is just outrageous. I work hard and am willing to contribute but I have been told to go away. I’ve had so many sleepless nights since it all happened.”

While Immigration New Zealand said they “sympathize” with the family, they remain firm on their decision. And New Zealand is not the only country to have such ableist, discriminatory policies. Canada declared a Costa Rican family — already living and working in Toronto — ineligible for citizenship because one of their children has Down syndrome, even though everyone in the family is healthy. They likewise were told they would be too much of a burden on the Canadian government-run universal health care system.