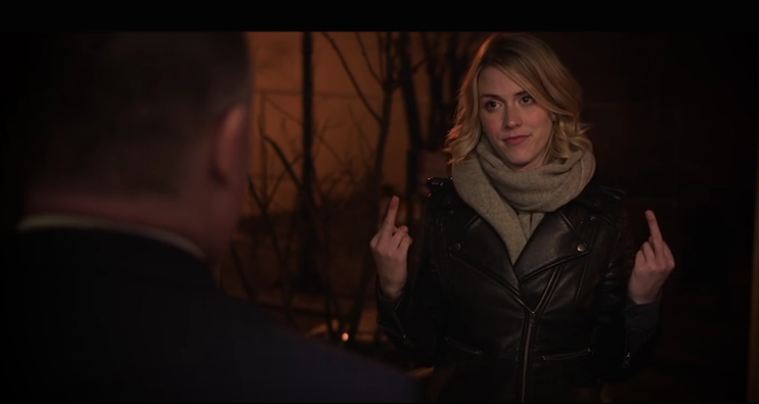 What is comedian Lizz Winstead’s obsession with pro-life people? First the creator of the Daily Show who runs the Lady Parts Justice blog created an app to “track” those who oppose abortion, and now she has published a video showing an abortion “caroler” harassing a pro-life politician.

In her most recent “production” of online propaganda called “Lies Actually,” the faux Christmas caroler shows up at the door of an alleged pro-life politician to “harass” him about what they call his “lies” that Planned Parenthood sells aborted baby parts.

“Lies?” Hmmm…let’s see… High ranking officials at Planned Parenthood negotiated the price for the parts of preborn babies on video – and – when the Center for Medical Progress made them public, those officials seemed to “disappear” so they could not be questioned further. Instead their very savvy and well paid president, Cecile Richards, issued a swift “apology” for their gruesome operation.

But, why look at facts when you believe that preborn babies are not human and Planned Parenthood is a saint, right? Back to Winstead’s new video.

In the footage, which mocks a politician who later admits to being gay, the Planned Parenthood supporting “caroler” arrives playing “Silent Night” and flashing a series of hateful messages at the person (allegedly a pro-life politician) who answers the door. After leading him to believe she was there for caroling, she quickly waves a message at him reading, “A**hole.”

We could pause right here to imagine the outrage from the media if this had been a video created by a pro-life comedian who went “caroling” to the home of an abortion politician and then waved hate-filled messages in his face – but- let’s just move on.

In Winstead’s video, the messages read as follows: It gets even worse as the alleged Planned Parenthood supporting “caroler” delivers the message “Merry F-ing Christmas” to the faux pro-life politician.

As she readies to leave, the Planned Parenthood supporter shoots the politician the proverbial “bird.” You can view the video here, but be warned there is graphic language and it isn’t funny. Personally, I wouldn’t waste any valuable time on it if I were you. There is a bright light hidden in this twisted pro-abortion parody though.

While Winstead uses vulgarity, hatred, and deception to slander pro-life politicians, “Silent Night” is playing in the background, beautifully announcing the arrival of the Newborn Baby who was lovingly sent to save the world from their sin. A baby who abortion supporters would say could have been killed in the womb if Mary wanted to. But she didn’t.