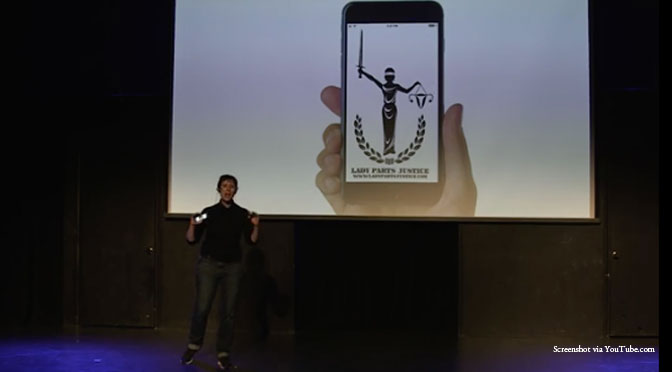 Abortion supporters are often critical of pro-life websites that expose the horrific things they do. So, an app which alleges to “track” or “profile” pro-lifers should receive criticism from the media, correct? Wrong!

“It’s like a hook-up app, but it focuses on all the sexist a–holes tirelessly fighting to crawl up in your vagina,” Winstead said when she introduced the game in a Steve Jobs-like presentation this fall, according to the NY Daily News.

“You can just type up your state and Boom! Hinder will pull up all the orgs that are in your area, your town or your vagina,” she says in the video, which the abortion blog Reality Check described as “fake”:

Of course, this is all satire. Winstead’s impersonation of Steve Jobs is just that: fake. The video is merely poking fun of the way presenters reveal new technology or ideas among a large audience of curious onlookers. The crowd was edited to whoop and holler at the most opportune moments.

But the app is real.

Winstead spoke to Mother Jones about the “Hinder vision” explaining how she came up with the name: “It’s about people who are hindering access to reproductive justice. And since it’s birth control- and reproductive rights-centric, we thought, ‘Why not ape a traditional hookup app?'” A description of the app on the Lady Parts Justice website says it will “expose anti-choice douchebags with a swipe” and emphasizes that it “tracks” opponents of abortion so they can be “exposed.”

The description of the app is colorful, to say the least:

Tired of searching for Mr. or Ms. Right, only to find Mr. or Ms. Right-wing nutbag? Hinder is an exciting new app that helps you keep track of all the unhinged anti-abortion zealots right in the palm of your hand! Just read, swipe and share! Letting people know about craptastic extremists has never been easier! Left or right, any way you swipe it, these creeps need to be exposed and with Hinder now you can! According to the Daily Show founder, Apple initially rejected the pro-abortion app, claiming it violated the company’s prohibition on defamatory, offensive, or mean-spirited content. She said they had a change of heart after the Huffington Post published an article about the app and pointed out that the same rule Apple cited in rejecting the app also states that “professional political satirists and humorists are exempt from the ban on offensive or mean-spirited commentary.”

The app allows users to swipe left where they are taken to a “donate” button or swipe Right where they can share the information they read. Listed among Hinder’s profiles is a doctor who is truly giving women a choice by allowing them the option to reverse their abortions. Dr. George Delgado has successfully reversed several RU-486 abortions, but, that appears to be something Winstead and Lady Parts Justice abhor – making his profile a favorite: Click on Illinois and the profile for Pro-life Action League executive director Eric Scheidler pops up: However, it would have been more shocking if Winstead had profiled the dangerous abortionists and abortion workers who injure, kill, rape, or commit despicable acts of violence on children instead.

But that would require that she take an honest look at abortion, which she has no intention of doing.