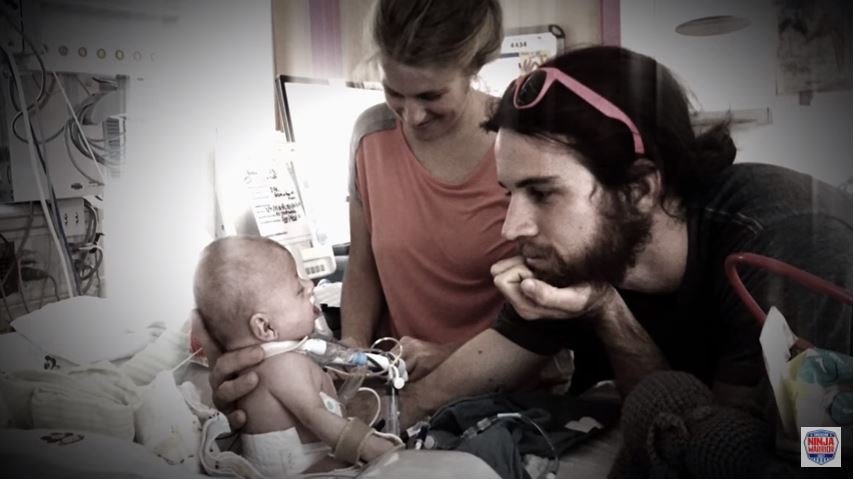 In a story that played out like a popular TV drama (This is Us, anyone?), American Ninja Warrior contestant Josh Butler and his wife Katie were expectant parents who would devastatingly not bring their firstborn child home from the hospital. Yet in the midst of their deep grief, their hearts full of love, loss, and a future ripped away, they saw beyond themselves and adopted another baby who was in need of parents.

“Our first son Dewey was born in May 2015 with a genetic disorder that had never been documented before,” Butler told American Ninja Warrior. “He had trouble breathing. He had trouble eating. There were definitely some dark times, some sad times. Basically, all our waking hours were in the hospital. That’s where he passed away after 132 days.”

The couple, who married in 2012, learned in September of 2014, that they were expecting their first child. But at their 20-week ultrasound, they received heartbreaking news.

“In January 2015, we went in, and they told us there was some thickening of the neck and that the baby had club feet,” Katie Butler told The Daily Advertiser. “Those were all markers for genetic conditions.”

The baby boy, named Josh Dewey Butler IV, tested negative for Trisomy 15, 18, and 21 and doctors couldn’t tell the parents what was happening or if he would survive.

“They said that (ultrasound) machines could only do so much,” said Katie Butler. “and that we might just have a small baby. But as Dewey grew, things looked bad.”

Doctors often struggled to find Dewey’s heartbeat and on May 15, 2015, at 39 weeks gestation, doctors induced labor. When Dewey’s heart rate continued dropping during labor, doctors decided to perform an emergency c-section, and Dewey was born with the umbilical cord wrapped around his neck.

“They said the cord looked like it was only at 20 weeks gestation,” said Katie Butler. “It was not a healthy umbilical cord.”

Initially, the only diagnosis Dewey had was diabetes. But after further testing was done, doctors learned that chromosomes six and 10 had broken off and flip-flopped, but not evenly. Some genetic information was missing, and some was duplicated. Doctors were stumped.

“At one point, he didn’t need any air, and then all of a sudden, his trachea collapsed,” said Katie Butler. “They had to press the code button at least eight times. He got a tracheostomy, he was on a ventilator, and we were working toward the goal of getting him a G-tube. At that point, he could go home. We prayed for it, but it seemed like one thing after another. It was actually a blessing, though, that he wasn’t ready for the G-tube because we got an extra month and a half with him.”

At four months old, doctors prepared to perform a routine surgery on Dewey but the baby boy didn’t do well.

“The nurse always calls the front desk for updates,” said Katie Butler, “but we didn’t get any calls. I felt like something was happening. For the two days before, I felt like a big change was coming, like God was preparing us for something.”

Dewey’s heart went into an abnormal rhythm during the surgery and doctors had to place a pacemaker in because he wouldn’t be able to survive with his heart beating the way it was. The new parents agreed to whatever the doctors had to do to keep their son alive. Unfortunately, Dewey died on the operating table.

The couple, who had wanted children so much, was devastated, but there was more that God had in store for them.

“While we were in the hospital, you get to be good friends with everyone,” explained Katie Butler. “Since we were discouraged from having any more natural kids, we were talking to different nurses about adoption. In November, it was a Wednesday, I really poured out my heart to God, crying, that I needed another baby. We had so much love and poured it into Dewey and now he was in heaven. I needed more kids to love.”

The next day a nurse called with some news. She told them there was a baby in the hospital who was ready to be discharged, but he didn’t have a family to go home with.

“Right away, I knew it was an answer to a prayer,” said Katie Butler.

The heartbroken parents jumped at the opportunity and within days they met little Braxtel. Braxtel had been born in December 2014 and had been in the hospital ever since. His mother was unable to care for him.

“Like Dewey, Brax was on a ventilator and had a trach, and when doctors told us, we were like, ‘We got this.’ With Dewey, there was no chance of his lungs getting better, but with Braxtel, he could get better. It was an optimistic situation,” said Katie Butler.

“He’s experienced such healing,” said Katie Butler, “such supernatural healing. We are so grateful.”

Often, when parents are given a poor prenatal diagnosis for their children, fear drives their decision to abort. They fear any pain and suffering their child may have to endure, they fear any struggles they might have to go through, and they don’t believe anyone else would want to adopt a child with special health needs. In reality, most couples can overcome the obstacles that arise when raising a child with a health condition, and there are many couples waiting to adopt who would gladly adopt a child with special needs. Couples like the Butlers are just one example of the loving people who are praying for a child to love unconditionally. All it would take is for a birth parent to choose life instead of death through abortion.

“Going on American Ninja Warrior means I can show Brax and my family that when you dream big dreams, with God’s help, you can accomplish your goal,” Butler told People. “There’s no obstacle too big for God. God is carefully and intentionally growing our family, and we know that he has uniquely equipped us to care for and adopt Brax by first giving us Dewey. The show gives our family a platform to share our story of loss and love to inspire others that with God, nothing is impossible.”