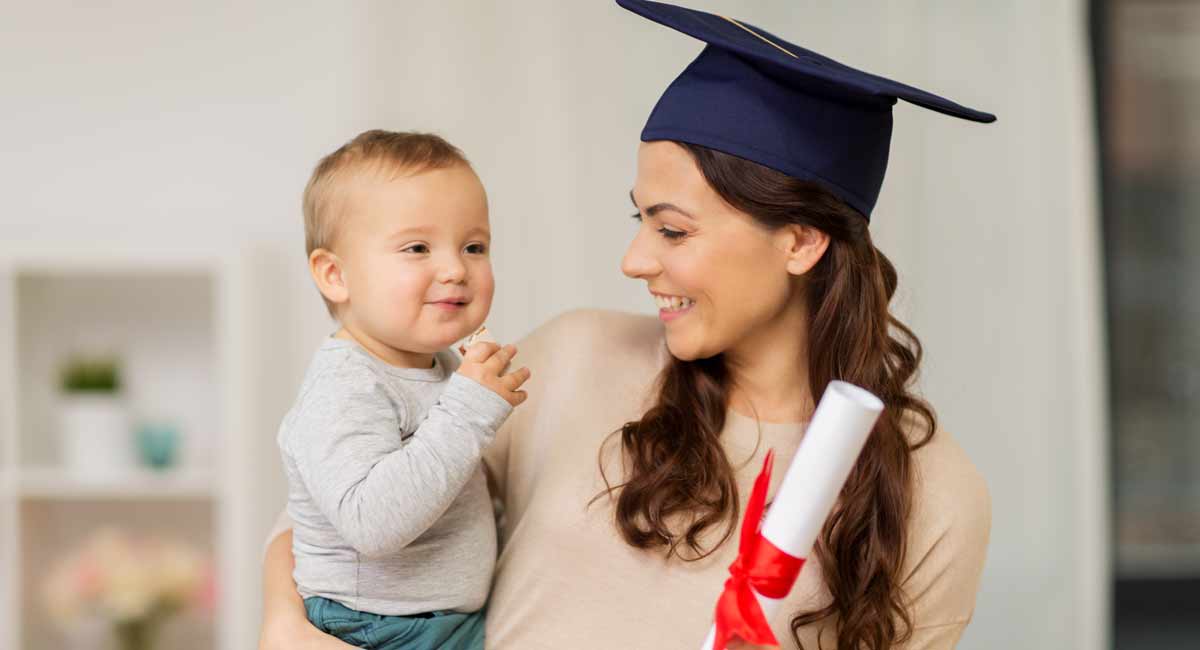 An August 2019 report from the Government Accountability Office (GAO) states that more than one in every five undergraduate students (22 percent) are also parents. About half of these student parents did not leave school with their degrees, signaling a need for schools to provide greater assistance to their parenting students.

Of the 4.3 million student parents, the GAO found that about 55 percent were single parents, 44 percent were working full-time while enrolled in school, and 64 percent were attending school part-time. Despite this, the report states that undergraduate student parents had less access to financial resources to help cover the cost of their education than students who don’t have children. Their average monthly cost of childcare is $490.

Mark Kantrowitz, publisher of SavingforCollege.com, told CNBC that students with children can have a difficult time securing childcare so that they can attend class. “If their babysitter is sick, they have to stay home from school, missing class,” he explained. “This affects academic performance and eventually whether they graduate.”

READ: This college student needed a babysitter… so her professor stepped in

The U.S. Department of Education has a program called CCAMPIS (Child Care Access Means Parents in School) which helps student parents with funding for childcare. About 4,000 children were able to have childcare in 2016-2017 because of this program, but another 4,200 children were left on the waiting list. Parents who received helped from CCAMPIS paid an average of $160 a month for childcare versus $490.

“Parents who are trying to build a better life for their children through education should be given every opportunity available to access quality, affordable childcare while completing their degree,” said Democratic U.S. Senator Patty Murray in a statement regarding the GAO report. While Murray is pro-abortion, the issue of helping pregnant and parenting students with childcare seems to be a point of common ground with many pro-lifers.

Part of the reason student parents miss out on accessing financial resources that help with childcare is that they aren’t aware the resources exist in the first place. Under CCAMPIS, student parents can actually ask their colleges to include in their financial aid package an allowance for childcare expenses. The problem is, the schools don’t always make that information known to students. GAO found that two-thirds of the college websites they reviewed failed to mention the program and that CCAMPIS discourages colleges from telling students about it.

“They can also use existing childcare to request an adjustment that could decrease their estimated family contribution, which can also potentially increase their aid eligibility,” explained Betsy Mayotte, the founder of The Institute for Student Loan Advisors. She told CNBC that there are scholarships that can be used to cover the cost of childcare, including the Soroptomist’s Live Your Dream Award.

GAO says there is an opportunity here for colleges to improve or expand their programs to help parenting students succeed in earning their degree. The group gave CCAMPIS three recommendations based on their findings but said that the Department of Education “disagreed” with those recommendations.

The image the abortion industry paints for women who become pregnant and want to pursue an education is bleak. It’s one of the common excuses abortion facilities and organizations use to convince women to buy their “service” of abortion. The unwillingness of colleges to assist student parents and for the government programs to try to hide their assistance from students help to wrongly convince these women that the only choice they have is abortion.

As previously reported by Live Action News, the Sanilac County Health Department in Michigan received heavy criticism from pro-lifers after it created a billboard depicting a young woman as pregnant vs the same young woman as a college graduate. The tagline said: “You can choose” with the word “this” next to the crying, pregnant girl and “or this” next to the same girl smiling in a cap and gown. It also says, “Take Control of Your Future.” 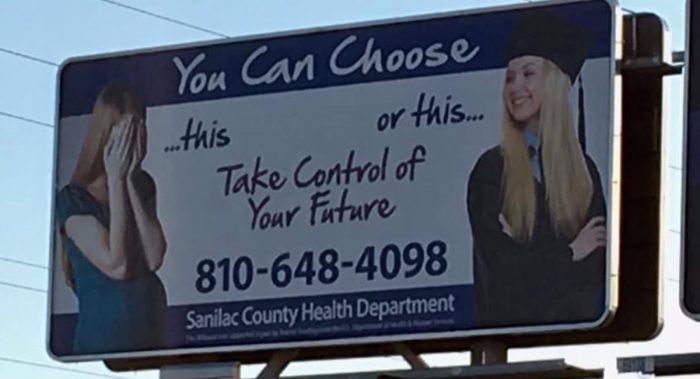 The Sanilac County Health Department has since apologized for the advertisement, but it’s just a small portion of the big picture that society sends to women. The message young women who are experiencing an unplanned pregnancy receive is that they aren’t smart or strong enough to handle motherhood and school at the same time. It also implies that there will be no one willing to help them succeed. In addition, it tells mothers who may be thinking of returning to school that they won’t be able to do it. It’s sexist. It sends a message of despair. It is the opposite of female empowerment. And it’s wrong.

Women can and do graduate from college while pregnant and parenting. Just ask single mother Briana Williams who graduated from Harvard Law School with her one-year-old daughter in tow. Or Janel Lanae Young who became a mother at age 15 and went on to graduate from Ohio State University. Yes, it can be a challenge and yes, women will need help. But if the abortion industry can only offer “help” in the form of killing, is that really helping at all?

Pregnant and parenting students can find real help through groups like Students for Life of America and Feminists for Life. FFL works to improve access to childcare for parenting and pregnant college students, as well as access to family housing on campus, health insurance, and private breastfeeding locations. They encourage colleges to establish programs for student parents such as on-campus childcare as well as alternative housing. If a student learns she is pregnant while living in the dorms, she should be able to live there until she gives birth, at which time family housing should be made available to her. When on-campus family housing is not available, Feminists for Life states that colleges should still provide housing aid.

The GAO report doesn’t indicate what percentage of student parents are mothers versus fathers, but the fact is, there is no marketing plan telling men they have to choose between an education and fatherhood. Schools aren’t promoting teen or unwed pregnancy by helping student parents afford and attend school; they are helping empower women to escape poverty, improve their lives, and give their children the best opportunities for their own successful futures.