At the Children’s Colorado Foundation, pediatric intensive care nurse Becca Kalivas shares the story of her son, Oliver, whom she calls “my hero.” After struggling with infertility for seven years, she and her husband Alex finally conceived a son… only to learn at a 20-week ultrasound that their son had hypoplastic left heart syndrome, a congenital condition in which the left side of the heart is severely underdeveloped. She writes:

We left the appointment in a fog, not knowing what was ahead for our little boy and family. After a few weeks, we reached out to Dr. Bettina Cuneo, a fetal cardiologist at Children’s Hospital Colorado. Just 12 minutes later, she responded to my email and provided us with so much comfort. But more importantly, she gave us hope, leading us to choose the Children’s Colorado Fetal Care Center for our son’s care.

In April 2017, at 25 weeks pregnant, we were told our baby was in heart failure and may not live. Again, our amazing care team at Children’s Colorado put their heads together and figured out how to save our little boy.

Hope. That’s what Becca’s doctors gave her. Unfortunately, not all parents get this kind of support, as in some countries, more than 70 percent of children diagnosed prenatally with hypoplastic left heart syndrome are aborted. Often, when it comes to children with disabilities, doctors give a grim prognosis. While a diagnosis of hypoplastic left heart syndrome does mean a difficult road ahead, death should never be considered the preferred solution for a child with disabilities or challenges. Live Action News’ Kristi Burton Brown wrote about another baby like Oliver in 2017 — Bowen Hammitt, whose parents chose life for him after his own congenital heart defect diagnosis. “While great advances in medical science have enabled the majority of babies with HLHS to live, not all are guaranteed a long life. Some are stillborn. Others die within the first five years. And many are aborted by their parents,” Brown wrote. “While it’s understandable when parents want to prevent their children from pain and suffering, this is not a valid reason to kill them.”

READ: This mother found out her baby had a heart tumor — and she chose life

Becca goes on to detail Oliver’s struggles, expressing great love and admiration for her son:

My little warrior, Oliver, made his debut on July 25, 2017. He had his first open heart surgery at just 2 days old…. His surgical recovery was remarkable! In the months that followed, however, he had countless complications. From problems with his intestines, to two bloodstream infections, to issues with his heart, he battled it all. At 3 1/2 months old, he had his second open heart surgery. Through all of this, he had us and his incredible care team at his side.

…. My baby boy is now just over 9 months old and is happy and joyous and so unfathomably resilient. For someone who has been through so much in his short time on earth – and even before his birth – you would never know it. 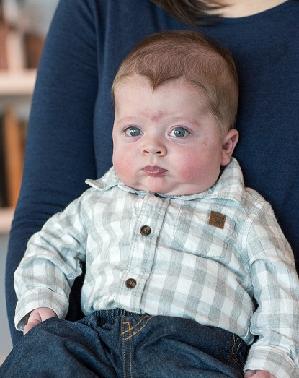 Oliver’s fundraising page notes that “Oliver will require a final palliative heart surgery in a few years, but for now he is growing and thriving at home.” Surgeries don’t “cure” children of this congenital heart defect, but they certainly enable them to live longer, fuller lives. And, with the support of loving and strong parents, and teams of doctors who value their lives, babies like Oliver will likely accomplish far more than anyone ever dreamed possible.

Becca says that watching her son go through his difficulties has actually caused growth in her, writing, “… I’ve realized my courage, my strength, my purpose has come from Oliver. I’ve watched this baby not just meet every challenge, but overcome it with a quiet strength and a fierce determination unlike anything I’ve ever seen. I’ve watched him struggle, but more importantly, I’ve watched him thrive in spite of everything he’s been handed. I’ve witnessed firsthand what it means to be truly courageous.”

She adds, “When I first found out I was pregnant, I never would have guessed that my infant son would be the one who taught me about courage, but that is absolutely what has happened. My little man is my hero. In his joy, I’ve found my bliss. In his strength, I’ve found mine. In his resilience, I’ve found my resolve. In his unwavering bravery, I’ve found my courage.”

Oliver and his parents have been through many difficulties, but those difficulties — and their love — have made them all stronger.