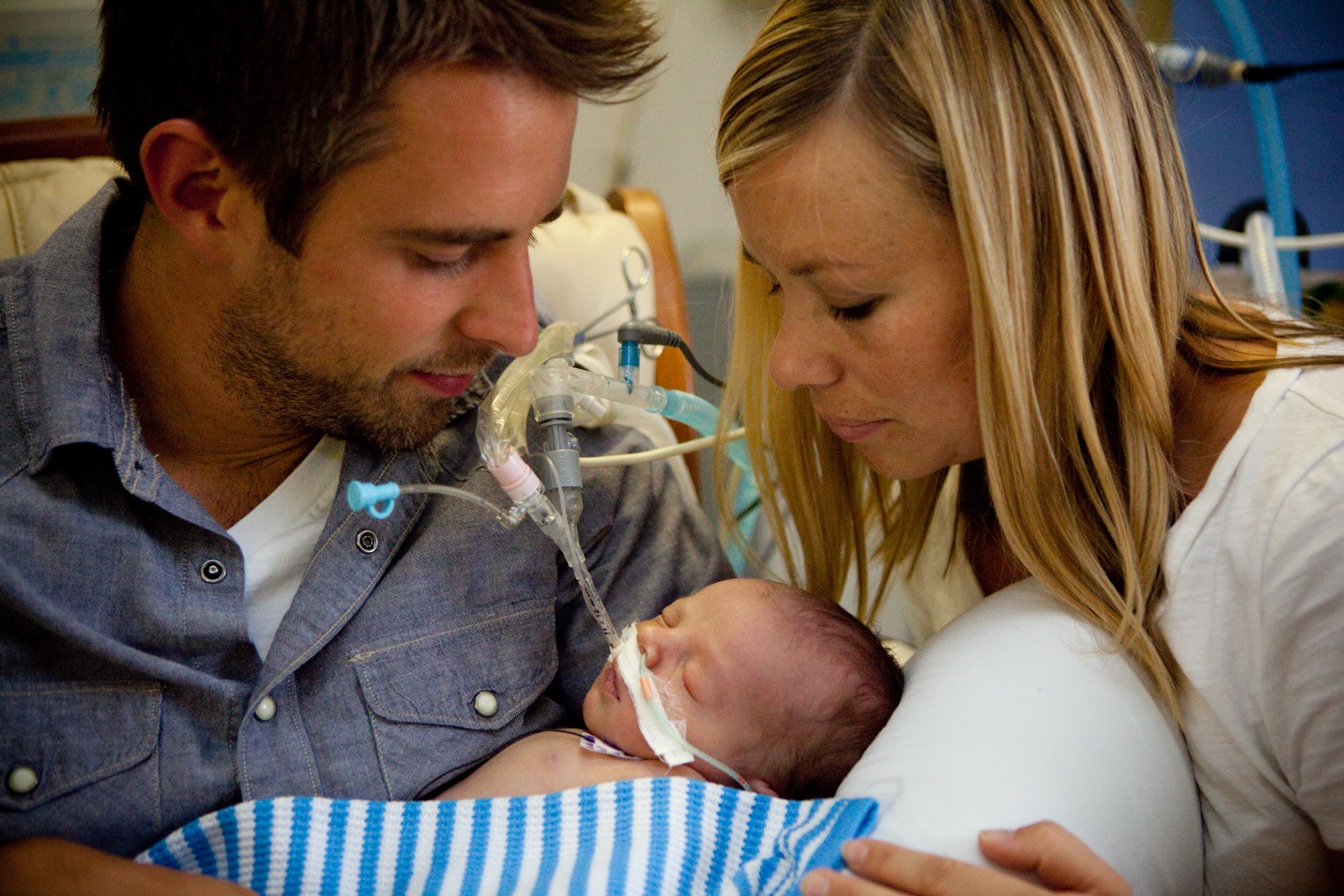 The story of two parents who wouldn’t let their son’s condition rob him of a chance at life.

Matt Hammit is the lead singer for Grammy-nominated Sanctus Real, a popular Christian band with multiple number-one hits. In September of 2010, Matt’s wife Sarah gave birth to their very first son, Bowen Matthew Hammit. The Hammit family tells the story of how they chose life in their own words:

As detected by an ultrasound before he was born, Bowen was born with a serious and rare congenital heart defect called Hypoplastic Left Heart Syndrome (HLHS), in which the left side of the heart is severely underdeveloped.

Just a few days after his birth, Bowen, whose name means “small, victorious one,” underwent his first open heart surgery. The surgery went well, but the next night he suffered cardiac arrest and Matt and Sarah feared they would lose him. After an hour of CPR on his tiny chest, still open from the surgery, Bowen was revived and placed on life support.  Slowly over the next few weeks, Bowen became stronger and no longer needed to be on life support or even oxygen. However, he had other complications including a stroke and being diagnosed with hyperinsulinism. 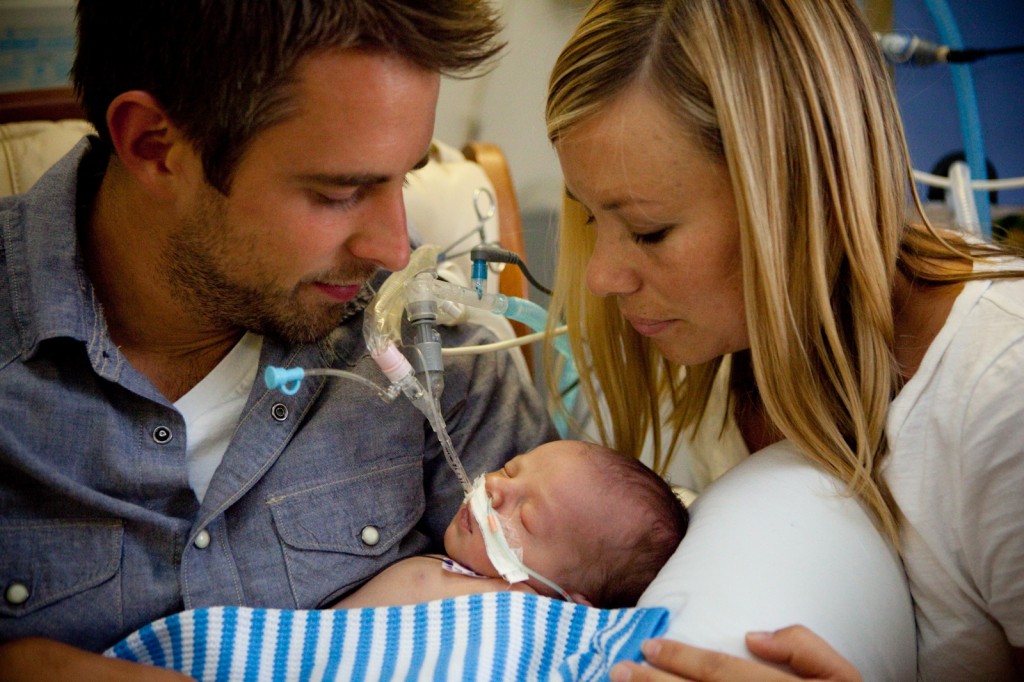 Matt and Sarah Hammit hold Bowen in the hospital as he fights for his life.

Despite brave little Bowen’s medical problems, he has thrived since his parents chose life. Bowen’s Heart is the Hammits’ blog, where they post updates, prayer requests, photos, and more. Babies diagnosed with HLHS usually need to undergo three separate surgeries, and Bowen is reportedly scheduled to have his last surgery at the age of two or three. While this little man still has a ways to go, his dad recently shared that Bowen’s latest surgery (in April) went “exactly as we hoped for.”

While great advances in medical science have enabled the majority of babies with HLHS to live, not all are guaranteed a long life. Some are stillborn. Others die within the first five years. And many are aborted by their parents. In some European countries, the rate of termination exceeds 70%. Sadly, a medical site, Medscape Today News, calls abortion a “treatment” for HLHS:

The treatment options available for the neonate with HLHS include medical termination of pregnancy[.]

While it’s understandable when parents want to prevent their children from pain and suffering, this is not a valid reason to kill them. A diagnosis of HLHS is not a certain death sentence, but abortion is. Illnesses or potentially shorter life spans are not treated by the choice of death. One of the main problems parents must contend with is medical professionals who make them feel that abortion is the best option, despite the chances of life for a child with HLHS.

A mom who aborted her baby with HLHS shares the perspective her cardiologist gave her that led her to reject a choice for life:

My cardiologist also seemed to think it [termination] was the better choice, though he didn’t come right out and say it. He just painted a very grim picture of the NICU babies he sees every day.

Instead of giving hope to a parent, scrambling to hold on after a diagnosis of HLHS for their child, why do some doctors prefer to talk only about the tragic cases? Clearly, babies like Bowen Hammit can thrive and experience life for years. Modernly, almost every child with HLHS can survive and many can thrive with the right treatment. How sad that some doctors find the need to basically predict only death, pain, and suffering, instead of encouraging a choice for life.

My son was diagnosed with Hypoplastic Right Heart Syndrome when I was 5 months pregnant.  I was very scared.  My OBGYN suggested an abortion, but I got a second opinion and I do not regret it, even though is hard to see your child go through open heart surgery twice. My little man is now 4 yrs old and had his last surgery and he is a very happy, loving and active little boy, and no one would ever guess all he has been through OR that he has any condition.  I love my son and would go through it all again to have him with me.  He is worth all the sleepless nights and all the hospital sleepovers:  he is my little angel, and has a great purpose in life.

Another mom, whose daughter Chloe died days after birth because of complications, shares her brave story:

It was a difficult pregnancy, but we were going to do everything possible to help Chloe survive this defect.  Our whole world was turned upside down by this diagnosis, but we continued to pray and we continued to move forward with our plans for her arrival.  We were ready and willing to make whatever lifestyle changes were necessary to raise our special heart child.  Yes, we were scared, but we were ready.

Several people have asked, if knowing the final outcome, would we have changed our decisions?  That’s one of the few questions that we can actually answer.  Perhaps we could have terminated to save my body from having the physical burden of carrying a baby that would not survive.  Perhaps we could be closer to our wants and needs of having another child to love.  In the end, we say YES.  We would do it all over again.  It stinks to have the postpartum body that is a constant reminder that I had a baby, yet I have no baby.  But, with everything that we have gone through, I would do it all over again.  We know, in our hearts, that we did everything that we could to help her survive … We would give her all of our love and put all of our hopes and dreams into her.  [Emphasis mine.]

Andre’s mom told of her son who lived with HLHS for fifteen wonderful years — even before the modern medical advances that allow almost every child with HLHS to live. No matter the cost, this mom chose life for her son:

Andre, my 1st child and only son, was diagnosed with HLHS at 16 weeks.  We were given 4 weeks to make a decision as we were told that he will not survive the growth in my womb and if he does, he will not live for long when he is born.  That was 1994. We decided we want to give him an identity and be part of our family even if it was for 3 days.

Andre arrived and our life changed. He brought much joy and happiness in his borrowed time of 15 years when doctors say he won’t last more than 3-7 days. He was his 2 younger sisters’ best friend and pillar.

Matt and Sarah Hammit, along with many parents of babies with HLHS, have made the brave choice and chose life for their child, no matter what it costs them. Life is the choice that parents make. They chose life: to give their son a chance to thrive and to make sure that he knows the power of love every day. Just before Bowen was born, Matt wrote Sanctus Real’s song, “All of Me.” This song was written about Bowen, and is one of the most touching songs I have ever heard. Pull out your Kleenex box and hear the story from Matt himself.

“All of Me” can be found on Matt’s newest album, Every Falling Tear. According to Today’s Christian Music:

Born out of the heart of a father, Hammitt’s main impetus for writing the songs on Every Falling Tear was to play them at Bowen’s bedside in the hospital, with the hope that they would be a source of comfort for his family, as well as a reminder of God’s faithfulness in the midst of their uncertainty. A video of Hammitt reflecting on the journey to Every Falling Tear can be found here.

A portion of the proceeds from the sale of Every Falling Tear benefits a new non-profit Matt and Sarah Hammitt set up to help families going through similar challenges as themselves; providing assistance for families of children affected by congenital heart defects. The album can be purchased through iTunes, Amazon.com and other digital and physical retail stores.

Editor’s Note: This article was first published in May of 2012 on Live Action News. It has recently been updated and republished.