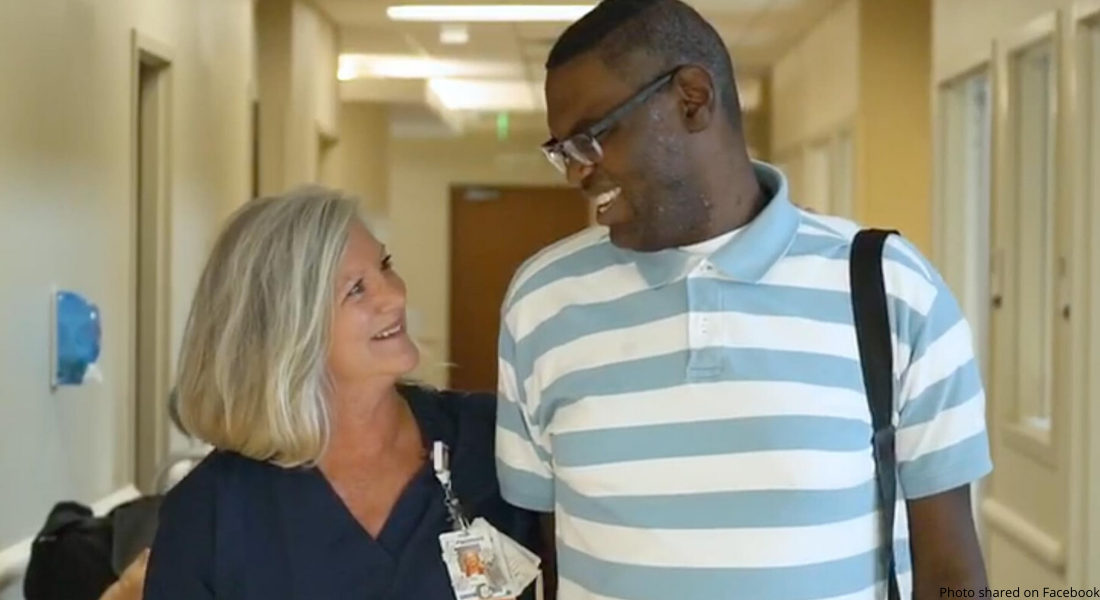 Jonathan Pinkard, a 27-year-old autistic man, was working as an office clerk and living at a men’s shelter for the homeless in Georgia when his health suddenly took a turn for the worst and he needed a heart transplant. His mother was in a rehab facility, and his grandmother — who had been his guardian — had passed away, leaving him with no support network, which meant he couldn’t get the transplant he needed. That was when ICU nurse Lori Wood stepped in and saved his life through an act of compassion.

Pinkard was in the hospital for four months after learning he needed a heart transplant, and Wood was assigned as his nurse. When she realized his situation, she made an extraordinary offer: he could move in with her, and she would become his guardian. “At some point, God places people in situations in your life, and you have a choice to do something about it,” she said to the Washington Post. “For me, there was no choice. I’m a nurse; I had an extra room. It was not something I struggled with. He had to come home with me.”

Pinkard, who had nothing but a cell phone, now has a place to live, and someone he calls “Mama” to help take care of him. He received his transplant in August, and Wood drives him to his appointments and makes sure he takes his medications. “Before I even get out of the car, he’s right there, hollering, ‘Hey, Mama!’ and wanting a hug,” she said, adding that she hopes to help him become more independent eventually. “He’s welcome to stay here as long as he wants to, but I also know that he deserves to have his own life. So at some point, when he’s ready, we’re going to try to make that happen.”

Anne Paschke, spokesperson for United Network for Organ Sharing, explained to A Mighty Girl why a support system is necessary for someone to receive a heart transplant. “If you get a transplant and don’t take your immunosuppressive drugs, you’re going to lose it,” she said. “They’re going to look at things like do you show up for appointments and follow doctors orders?”

The story of Pinkard and Wood is an example of how every life has value — even those that many people see as disposable. People who are sick, homeless, elderly, or disabled are frequently viewed as having lives that aren’t worth living. As assisted suicide spreads across the globe, people are being euthanized for disabilities like autism. Parents are even able to kill their own children, simply because they are disabled.

Charlotte Fitzmaurice Wise was able to legally kill her 12-year-old daughter Nancy, merely because she was severely disabled, by depriving her of nutrition and fluids, slowly starving and dehydrating her until she died. Nancy was not dying, was not on life support, and was able to breathe on her own. The horrifying Baby Doe case allowed a newborn with Down syndrome to likewise starve to death with his parents’ consent, merely because he had Down syndrome — even though multiple families offered to adopt him.

All people, even those whom society believes are not worthy of living, have intrinsic value. It is the most vulnerable among us that should be given the most protection and support, whether they live in the womb, have a disability, or don’t have a home. All lives have value.