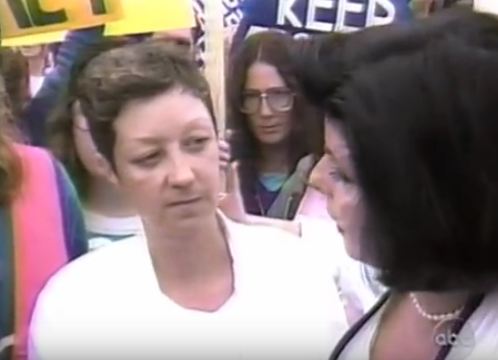 Norma McCorvey, who died on February 18, 2017, was best known as the plaintiff in Roe v. Wade, the 1973 Supreme Court decision that struck down all abortion laws in the United States. Lawyers Sarah Weddington and Linda Coffee used McCorvey in their quest to legalize abortion nationwide with no restrictions. At her attorneys’ urging, McCorvey signed an affidavit, falsely claiming that her pregnancy was the result of gang rape. The affidavit set Roe v. Wade in motion. This deception was a calculated attempt to elicit more sympathy from the Supreme Court justices and the public.

Though pro-choice at the time, McCorvey was troubled when she found out her court case had struck down all abortion laws. Sitting alone in her home, brooding and drinking, she gave in to feelings of depression and guilt and attempted suicide.  Reporter Tom Nevin describes what happened:

When she found out that the case had gone all the way to the Supreme Court and resulted in legalizing abortion in all 50 states, she was stunned. “I sat in the dining room that night and just kept rereading the newspaper story and drinking – drinking and thinking,” she says. “It made me sad to know that my name, even though it was a pseudonym, would always be connected to the death of children.” McCorvey got a straight razor and started cutting her wrists a little at a time. “That didn’t work, so I went out and got as many pills as I could. I took all of them and chased it with a quart of Johnny Walker, thinking I would die, and I would never have to talk to Sarah Weddington or Linda Coffee again. But that was not God’s plan for me.” (1)

Many years later, McCorvey would say:

Although I was an emotionally abused child, and a sexually abused teenager, I believe the worst abuse was inflicted by the judicial system. In retrospect, I was exploited by two self-interested attorneys. Worse, the courts, without looking into my true circumstances and taking the time to decide the real impact abortion would have upon women, I feel used me to justify legalization of terminating of the lives of over 35 million [now almost 55 million} babies. Although on an intellectual level I know it was exploited, the responsibility I feel for this tragedy is overwhelming.(2)

In 1995, McCorvey became pro-life and worked to undo Roe v. Wade for the rest of her life.

McCorvey was working in an abortion facility at the time of her conversion. She worked in several facilities at different times. In her involvement in the abortion business, she saw some of the worst the industry has to offer. She would later describe the conditions in one abortion facility:

I started working at the A to Z clinic in January 1995, and it was a health disaster waiting to happen. … Light fixtures hung out of the ceiling; falling plaster dusted everyone who walked by…. We fought an ongoing, and losing, battle with the rat population…. Every morning we found rat droppings all over the clinic. Sinks were backed up — in a reputed medical clinic no less — and blood splatters stained the walls. The “parts room” where we kept the aborted babies was particularly heinous. No one liked to be in there to do their business, much less to clean the place, and since no patients were allowed back there, it was pretty much left to ruin. If a baby didn’t make it into a bucket, that was too bad; it was left to lay there. Other babies were stacked like cordwood once every body part had been accounted for… the room smelled awful… The floor of the clinic invited contamination. It was covered by an old, gold and brown shag rug. At least I think it was gold and brown- no one really knew for sure, since the rug had not been cleaned in a long time. (3)

Rats, blood, and filth. That is what the women who went to the facility were exposed to. Roe v. Wade was supposed to make abortion safer and more sanitary. Obviously, it failed.

Shady things went on in the abortion facility. McCorvey and the other abortion workers were paid on commission based on how many abortions they sold. They would deceive the women:

I knew most of the women… were never told the truth about abortion. They never knew that their babies had heartbeats, fingerprints, functioning organs…. Instead, they were told it was “tissue” or a “missed cycle” or some other bald-faced lie. I never thought people could be so gullible, and yet they were. (4)

In the beginning, McCorvey bucked the system. When a young woman seemed hesitant to abort, she told her the truth:

I began to make enemies right away, thinking that women should at least get a fighting chance to understand what they were doing. I remember one afternoon in particular. A woman came up to the desk and said, “I am so terribly nervous, I can’t fill out this form.”

A patient behind her clicked her gum and said, “Don’t worry about it. It’s just like getting a tooth pulled.”

“Excuse me?” I cut in. Then, to the woman who spoke first, I said, “Sugar, are you sure this is what you want to do? Do you realize where you’re at? This isn’t like visiting the dentist. This is an abortion clinic. If you go back there, they’re going to take your baby away.” (5)

At this point, other abortion workers tried to stop Norma from speaking, but she persisted:

“Let me explain something to you, girlfriend.” I took her outside, ignoring the exclamations of disgust behind me, and explained the procedure, step by step.

The girl’s face became so white I thought she was going to faint. She was horrified.(6)

The girl ran out of the facility and did not have an abortion.

But McCorvey soon gave in to pressure and fell in with the other facility workers. She began lying, as they did, to the women.

McCorvey also performed medical tasks she was not qualified for at the clinic:

Once the patient was settled, we hit her with about 40% nitrous oxide. Though I have received no medical training, I routinely performed this function (as well as other medical acts, such as drawing blood). Most abortionists do not want to spend the money to pay a specialist.”(7)

The doctor was determined to make as much money as he could:

[S]ometimes I would feel really ripped off by the doctor. Since I booked the abortions, I knew what he was getting paid for each one, but he bolstered his profits by hiring untrained staff like me for 6 bucks an hour. (8)

In addition, the abortionist asked her on more than one occasion to fudge the numbers on the charts, claiming that women were farther along than they were in order to charge them more money.

McCorvey’s firsthand experiences in the abortion industry gave her insights about abortion that few have.

She would later say:

I’m not afraid to say abortion is murder, plain and simple. I know, because after Roe V Wade came down, I went to work at an abortion clinic. And I saw death firsthand. I’ve seen the blood of a dead baby pour out onto the floor of the operating room. I’ve seen the tiny parts of babies (hands, feet, torsos, heads) pulled piece by piece from their mothers’ womb. I’ve heard the cries and bloodcurdling screams of women who just killed their own flesh and blood. (9)

McCorvey witnessed the most horrific aspects of abortion in her time as an abortion worker. She was converted by the compassion shown to her by pro-lifers who moved in next door to her abortion facility. Even though she dreaded it when the pro-lifers arrived, she slowly struck up a friendship with them. They were patient and compassionate with her, even when she yelled at them and taunted them, which she did many times. The title of her book Won by Love illustrates the way she was won over.

It is always patience and kindness that changes abortion workers’ hearts, not angry rhetoric and hateful words. McCorvey became an outspoken champion of life because of the compassion she was shown. It is important for pro-lifers to show this same compassion to others in the abortion industry.