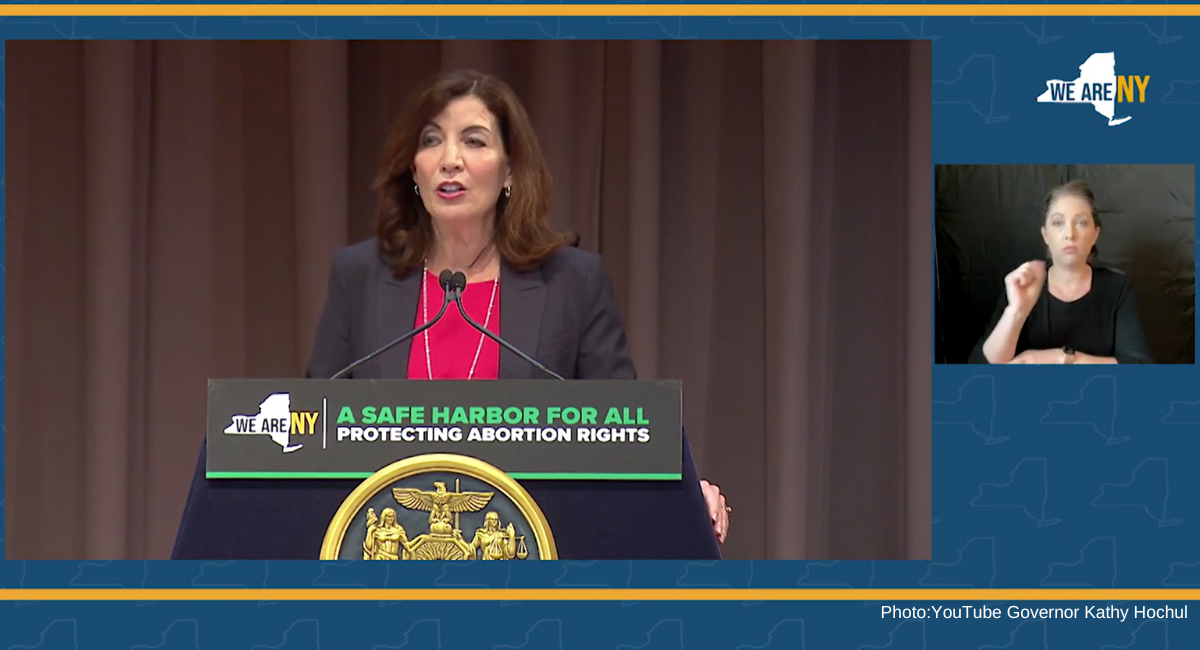 During the signing of legislation aimed at immediately protecting abortion and abortionists in New York if Roe v. Wade is overturned, Gov. Kathy Hochul called pro-life individuals “Neanderthals” and compared herself to the original, leading feminists of the United States. However, those feminists actually opposed abortion and would stand against the very pro-abortion ideas Hochul propagates.

Hochul spoke to a gathering of abortion supporters in The Great Hall in New York City and compared her work in protecting abortion and abortionists to the work of the strong women who fought for legitimate rights for women and who stood firmly against abortion.

“This historic venue,” she said, “[…] This Great Hall, the very space we’re in at this moment, played a pivotal role in the advancement — the long, often twisted journey toward women’s rights — from that first meeting with Susan B. Anthony and Elizabeth Cady Stanton who challenged the status quo as they had done in other places. Frances Perkins who became a leader in state government when FDR was governor but also went on to define a generation of support for people in their time of need during the Great Depression when FDR became president. So this is the place that women’s voices need to be heard, they have been heard, and after today they will be heard once again. Indeed they will not just be heard, they will roar.”

Yet, these early suffragists of the United States — Anthony, Stanton, and Perkins — were against abortion. Elizabeth Cady Stanton rightly called abortion “child murder” and “evil.” She also stated, “We are living today under a dynasty of force; the masculine element is everywhere overpowering the feminine, and crushing women and children alike beneath its feet. Let woman assert herself in all her native purity, dignity, and strength and end this wholesale suffering and murder of helpless children. With centuries of degradation, we have so little of true womanhood, that the world has but the faintest glimmering of what a woman is or should be.” Stanton saw abortion for what it truly is — the oppression of women and children.

Anthony is credited with writing some of the most powerful anti-abortion articles and said of abortion, “[…] no matter what the motive, love of ease, or desire to save from suffering the unborn innocent, the woman is awfully guilty who commits the deed. It will burden her conscience in life, it will burden her soul in death; but oh! Thrice guilty is he who, for selfish gratification, heedless of her prayers, indifferent to her fate, drove her to the desperation which impels her to the crime.”

What would the reaction of these strong pro-life women be to hear Hochul call out their names in celebration and defense of abortion?

The women of New York will never be subjected to government-mandated pregnancies because that’s what will ensue if Roe v. Wade is overturned by the Supreme Court.

We’ve endured centuries of misogyny and discrimination and domination, but they are all supposed to be over by now. This is 2022. The right to control our own bodies was supposed to be a well-settled precedent by now, or so we thought.

First of all, there is no such thing as a “government-mandated pregnancy” in the United States. The government does not mandate that any woman become pregnant and could not mandate pregnancy — as any woman who has struggled with infertility knows. Pregnancy cannot be willed or forced. However, government can incentivize abortion as the “easy” answer for impoverished women by making it taxpayer-funded. Statistics prove that taxpayer funding of abortion increases abortion rates.

It should also be noted that, despite Hochul’s comments about bodily autonomy, Hochul mandated vaccination against COVID-19 for health care employees in New York — so clearly she has no problem with government mandates on people’s bodies when they suit her political motivations.

Second, to call pro-lifers “Neanderthals” shows that Hochul intends to bully her pro-life constituents into submission to her pro-abortion goals. She wants pro-lifers in New York to feel inferior and uneducated. However, pro-life values align with advancements in science and medicine. Since Roe was decided in 1973, ultrasound technology is just one of the ways science has allowed us to learn about life inside the womb. Embryos and fetuses can be clearly seen and it is obvious that they are human beings — persons — who have their own bodies and are deserving of their own rights, including freedom and liberty. It is common scientific knowledge that a new human life begins at the moment of fertilization.

Finally, Hochul claims that abortion has freed women from “centuries of misogyny and discrimination and domination” — except it hasn’t. Pregnancy discrimination continues in the workplace, education, and other areas; because abortion is legal and accessible, some employers and institutions now expect women to abort if they want to keep their jobs or stay in school.

Legalized abortion turns women into the very oppressors that suffragists like Stanton and Anthony worked so hard to climb out from under. Abortion pits mother against child, causing a woman to discriminate against her baby — as if her child is inferior, undeserving of rights, and of no value. And abortion allows women domination over more vulnerable humans — their own children — just as men dominated women for centuries despite their inherent equality.

The end of Roe

Hochul said she read the leaked Supreme Court draft opinion of Dobbs v. Jackson Women’s Health Organization with “horror and disgust” and that she believes “the sky is on the verge of falling” with the impending possible overturn of Roe. She noted that the end of Roe would be the realization of “our worst fears” and therefore, she felt she needed “to act now as if it is a final” decision from the Court. This, she said, is why she has signed the legislation that further cements New York’s status as one of the most pro-abortion states in the country.

Abortion supporters fail to admit the harm that five decades of legal abortion have caused, and fail to acknowledge the truth that is right in front of them: every abortion is an act of homicide that violently kills a living, innocent human being.