Molly Yard was born in China and later moved to the U.S. She became a political activist in college, and eventually became the political director of the National Organization for Women (NOW) in the 1970s. In 1989, after becoming the national president of NOW, Yard stunned the world by praising China’s infamous One-Child Policy and denying that the communist government coerced women through forced abortions to adhere to China’s brutal population control policies.

The stunning statements were made during her appearance on the Oprah Winfrey Show in 1989, where she, along with an abortion facility director, faced off against pro-life activist Randall Terry and American Life League’s Judie Brown.

In the video below, you can listen to the exchange:

Molly Yard: “I’ll tell you if you promise not to interrupt.”

This is where the conversation became interesting, as the leader of the pro-abortion feminist group told Oprah that she supported China’s One-Child forced abortion policy:

Molly Yard: ”I consider the Chinese Government’s Policy among the most intelligent in the world. The Chinese government has to deal with the fact that their population is growing — has been growing at such an enormous rate that they are in the position of being almost unable to feed their population now. And so they have determined that they should have in most of China — particularly the Eastern seaboard, which is absolutely overrun with humanity — a one-child per family policy…”

Molly Yard:  “I am not finished… It is not a forced policy.”

Molly Yard: “I’ve been there. I have talked to the Chinese authorities. They do everything they can to persuade people — with a carrot — that a One-Child policy is correct. What is the carrot? Educational opportunities that are better for the one-child family than if you had many children.”

Yard denied that China’s policy was a forced abortion policy (though according to her statements, it was certainly coercive), yet there have been many documented cases of brutal forced abortions being carried out in China.

Even the New York Times later admitted that “in the 1980s,” Chinese officials “routinely forced women to abort fetuses that would have resulted in above-quota births….” 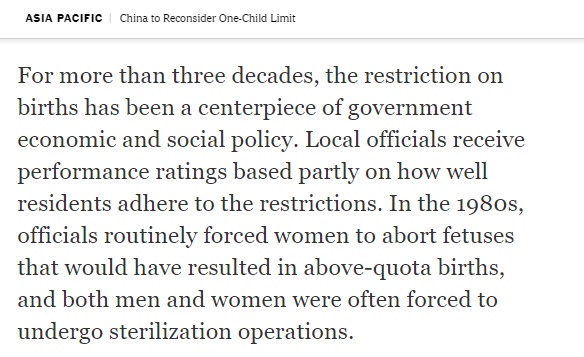 An op-ed published in the Times described the case of a woman who was eight months pregnant and unable to pay the 20,000 yuan fine.

“For two days she writhed on a table, her hands and feet still bound with rope, waiting for her body to eject the murdered baby,” Ma Jian wrote. “In the final stage of labor, a male doctor yanked the dead fetus out by the foot, then dropped it into a garbage can.”

A report in The New Yorker detailed the forced abortion of another Chinese woman, seven months pregnant, after she failed to pay a 40,000 yuan fine for an “excess birth” under China’s draconian population control policies:

…[A] twenty-three-year-old expectant mother, who was escorted from a relative’s home in Shaanxi province by local family-planning officials, shoved into a van, and driven to a hospital. She was blindfolded and given a document to sign. It didn’t matter that she couldn’t see it; she knew why she was there. She had violated the one-child policy. Two shots were injected into her belly, and on the morning of June 4th she gave birth to a stillborn baby girl.

Afterward, while she lay on a metal-framed hospital bed, her sister took a devastating (and, be warned, graphic) photo: mother, beside the bloodied remains of her daughter. It electrified the country. 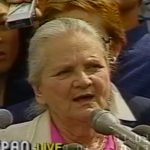 NOW president Molly Yard”The one-child policy has reduced women to numbers, objects, a means of production; it has denied them control of their bodies…” Jian added.

In more recent times, Hillary Clinton claimed that China no longer had such a policy. Reggie Littlejohn, President of Women’s Rights Without Frontiers, responded, “If [Clinton] thinks that China no longer forces women to abort babies, she should explain that to a couple, surnamed Zhong, who in August of this year were forced to choose between an abortion at eight months or the loss of both of their government jobs. Or she should inform He Liping, who was forced either to pay an impossible ‘terror fine’ of $39,000 or face abortion at six months.”

Upon her death in 2005, the Washington Post reported how “Under [Yard’s] leadership, NOW’s membership grew from 140,000 to 250,000, and the annual budget increased 70 percent to more than $10 million,” and that Yard “led the campaign to win approval for the import of RU-486, or mifepristone, the French ‘abortion pill'” — a pill that comes with its own set of horror stories and risks:

NOW’s history and true agenda has been uncovered by journalist Sue Ellen Browder in her well-researched book, “Subverted: How I Helped the Sexual Revolution Hijack the Women’s Movement.” Browder paints a clear picture of how NOW deceived the public by claiming to have the goal of advancing the rights of women, when in reality, its purpose was to promote and advocate for abortion. When Betty Friedan founded NOW, she made the deliberate decision to allow her newly birthed “women’s rights” organization to be hijacked by men to push for the decriminalization of abortion.

This is another example of how NOW leaders have shown a twisted willingness to throw women overboard in an effort to promote the pro-abortion agenda.