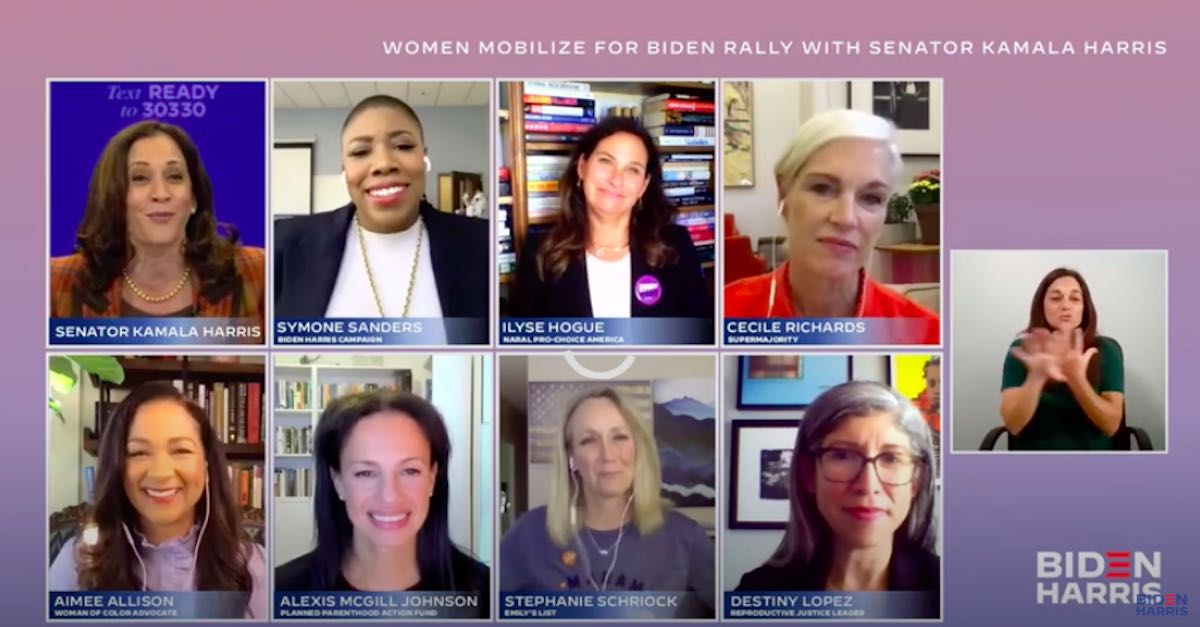 The event’s purpose was to empower women to stand together for freedom and equality. On the surface, this sounds like a positive message. However, NARAL’s virtual rally is demonstrative of how abortion has been weaponized as a political tool – one that undermines women and pits them against their unborn children.

Sanders began the event by recognizing the women who have found themselves facing unprecedented challenges because of the COVID-19 (4:12 – 4:36). Both sides of the abortion debate can concur that women deserve to be lifted up in a time of crisis. As many pregnant women find themselves deprived of a job or their usual supportive networks, pro-life pregnancy centers throughout the country have been stepping in to provide free resources.

Sadly, the rest of the evening is unlikely to inspire the same level of agreement, as NARAL’s abortion advocacy prevents them from being champions of an authentic feminist movement.

Organizations like NARAL rally people to their cause by claiming to stand for “women’s equality.” But NARAL’s concept of feminine freedom adheres to sexual revolution principles by pushing the abortion agenda of its male founders. Despite the focus of the webinar being on the power of women’s voices, the event neglected to mention that polls conducted before Roe v. Wade showed a majority of women disapproved of abortion.

Hogue shared that NARAL is combating “disinformation” about abortion within the public sphere (7:26 – 7:44). She said this work is necessary to “call out the lies and get the truth out there about why abortion is central to freedom, justice, and to our ability to have dignity in this society.”

Ironically, NARAL has actively engaged in disinformation by advising the media to avoid publishing scientific facts about fetal development, the reason for late-term abortions, and the real number of Americans who support Roe. This is nothing new for NARAL, as their founder, Dr. Bernard Nathanson, admitted years ago the organization’s entire fight to legalize abortion relied on fabricated statistics.

All of these deceptions are intended to support Hogue’s message – women must have an abortion to succeed – which is hardly empowering, and it carries the sexist implication that a pregnancy is the sole responsibility of the woman. As ethicist Daniel Callahan explained: “If legal abortion has given women more choice, it has also given men more choices as well. They now have a potent new weapon in the old business of manipulating and abandoning women.”

Many of the societal issues abortion was supposed to solve for women – unintended pregnancies, single motherhood, child abuse, and divorce – were exacerbated after abortion was legalized. Furthermore, NARAL’s virtual rally was intended to highlight women’s strengths and prove they’re uniquely capable to vote, serve in government, or hold positions of power. Isn’t it rather insulting for Hogue to imply women cannot achieve these successes without abortion? In fact, Hogue’s position is easily disputed by research into laws against sex discrimination, proving the progress women have made throughout the years has not been derived from abortion access.

Lopez and a live audience member, Brittany Mostiller, criticized the Hyde Amendment for preventing low-income women from accessing abortion (24:38 – 24:57, 37:30 – 39:22). Mostiller shared her personal story of discovering she was pregnant and deciding to have an abortion, but not being able to afford one because the Hyde Amendment prevents taxpayer dollars from funding abortions. She described it as an “emotional” experience, as by the time Mostiller had raised the necessary funds, she was in her second trimester.

Since 1976, the Hyde Amendment has saved over 2 million lives, and it’s supported by a majority of Americans. Pro-choice activists claim they want to repeal the Hyde Amendment in the name of women, but shouldn’t we offer women like Mostiller something better than abortion? The push to abolish the amendment carries this message: Low-income women’s children are less valuable, and their children are better off dead.

Abortion as an “essential right”

“It is as much as anything, an essential right if not a fundamental right to have the decision and the decision-making ability over [our] own bodies,” Harris said about Roe. (34:58 – 36:21)

But Roe did far more than legalize abortion. It shielded dangerous abortionists by prohibiting public health officials from subjecting them to health and safety standards, enabling men like Sidney Knight to commit legal abortions with the ethics of back alley procedures. The 1973 ruling took the abortion issue away from the states and led to the destruction of more than 60 million preborn children.

Harris also discussed restoring federal funding to Planned Parenthood, an organization with declining health services that performed over 345,000 abortions last year. Harris went on to claim Planned Parenthood is “trusted by women in the community.” Not only has Planned Parenthood been caught aiding women’s abusers, but as Harris knows, the abortion provider was filmed on undercover video illegally trafficking aborted baby body parts. Just last year, several Planned Parenthood officials admitted under oath the content of the videos was true.

If only NARAL would consistently abide by this philosophy. Women’s equality does not come from abortion, and society that cannot value both women and their children will only do harm to them both.

Women and their children deserve better than what the abortion industry has to offer them.