After having been advised to abort her first two children due to both social and medical reasons (which she refused), Heather Hobbs was heartbroken to learn that doctors wanted to abort her third child as well. At around 24 weeks gestation, Hobbs was experiencing a nagging feeling that something wasn’t right with her preborn son. Concerned, she spoke with her doctor about the sinking feeling she had, but her doctor brushed it off. Still not satisfied, Hobbs asked for an ultrasound just to ease her mind. Thankfully, her doctor agreed, but what they discovered in the ultrasound would send Hobbs and her baby boy down a long road of medical mysteries.

“They found a dark hole, a black hole in his stomach,” explained Hobbs who lives in Oregon. “They sent me to the maternal fetal medicine specialists with a better, more clear ultrasound. They found a big black hole with stuff inside of it. They didn’t know what it was either.”

The ultrasound images were sent to Oregon Health and Science University, where it took five days for doctors to research what might be going on with the baby’s stomach. The diagnosis was meconium pseudocyst. Basically, the baby’s intestines had burst inside of his body and a shell had formed around that area. It was filling with stool and becoming infected.

Hobbs was told there was a high risk of infection for both her and her baby if the pocket ruptured, and that he likely wasn’t going to survive. If she didn’t abort, they said, she could die too.

“They gave a less than one percent chance that he would live if that happened,” she explained. “They strongly suggested aborting. I told them I couldn’t do it. I told them I was willing to take on the risk if they would be willing to just keep him alive.” 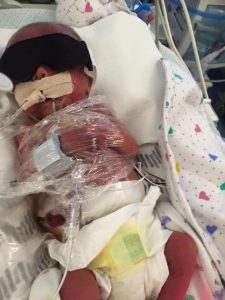 The doctors agreed but were sure to provide consent papers for Hobbs to sign indicating that she was going against their advice. This freed them of any liability should she die.

Doctors wanted Gideon to grow more. At this point, he was still only at 26 weeks gestation and they wanted to get him to 32 weeks before they induced labor and tried to save his life with emergency surgery. Unfortunately, things didn’t go as planned and Hobbs went into preterm labor at 28 weeks. Medications failed to stop the labor and she was airlifted to Portland where she gave birth to baby Gideon.

“He was purple, and blue, and not moving,” she recalled. “He was a limp noodle. They took him away and wouldn’t tell me how he was doing or if he was alive. It took about six or seven hours until I knew that he was stable and being prepped for surgery.”

Doctors performed surgery to repair Gideon’s intestines and were surprised that he survived. But quickly after surgery, he developed pneumonia and doctors once again told Hobbs that her son wasn’t going to live. But live he did. Gideon kept fighting and now at 15 months old, he has survived nine surgeries and countless bouts of respiratory infections. He also has a g-tube to help him gain weight because he was struggling to grow.

While he still doesn’t have an official diagnosis, Gideon is currently being treated for Cystic Fibrosis Metabolic Syndrome, which is diagnosed when a person has one known mutation for cystic fibrosis, but doctors are unable to find another. While there are 1600 known mutations for CF, there are still more to be discovered. In many cases of CF related metabolic syndrome, the symptoms are more mild. This is not the case with Gideon. 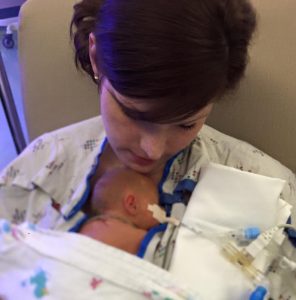 Gideon and his mom.

“He’s not a classic CF case,” explained Hobbs. While Gideon is receiving the usual CF therapies and medications, his CF care team is still a bit baffled by him and have said that they aren’t sure he will live beyond age two. Most people born with CF today have a 50/50 chance of living until age 40. Each month, Hobbs and Gideon make the five to six hour trip to Portland to check in with the CF care team.

Another diagnosis doctors are considering for Gideon is Pearson syndrome. Pearson syndrome and CF share many common symptoms including pancreatic insufficiency which causes an inability to absorb food and nutrients and therefore gain weight, and frequent respiratory infections that lead to hospitalizations.

“He gets an ear infection and it drops down to his chest,” explained Hobbs. “So he keeps getting these infections and taking super antibiotics and he’s had both sets of the strong antibiotics. They don’t seem to be working anymore. He gets hospitalized pretty regularly.”

In May 2017, Gideon and his family are heading to the Mayo Clinic where they will stay for about a month while different medical teams try to determine exactly what to diagnosis him with. A proper diagnosis will mean better medical care and the chance to both save his life and give him a better quality of life.  While doctors at the Mayo Clinic are leaning towards a diagnosis of Pearson syndrome, they really won’t know until they have the chance to test him and keep a close eye on him. He will return to the Mayo Clinic in August for a follow-up.

“A lot of people think of Gideon as a burden. That’s not the word I would use to describe him. He is amazing and beautiful and sweet and I would never ever take it back, going through this. He has strengthened my family. He has given his doctors a new outlook on keeping a baby who has a diagnosis,” said a tearful Hobbs. 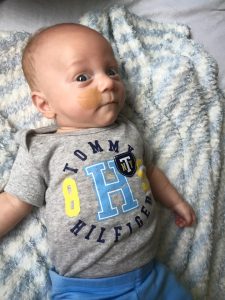 A happy Gideon learning he will be discharged from a hospital visit.

After being told to abort all three of her children, Hobbs has begun to question the medical community in America. She wonders how many more moms out there are being told to abort their child for one reason or another. She hopes other mothers considering abortion will see Gideon’s story and choose life for their child. No matter what has happened or will happen, she is grateful for her son’s life and says that he has brought her and her husband Jeremy closer together.

“I’ve prayed about it and I feel strongly that he’s not going to die within the next six months as the doctors are indicating,” said Hobbs. “I feel like I need to get him to the Mayo Clinic and to let them do their workup. I’ve been very blessed to be pretty positive through most of this. I’m really grateful I had him. It strengthened my marriage significantly. I helped me see my husband’s strengths and it helped him see my strengths. He spent four months taking care of our other children at home and cleaning the house and working while I sat in the hospital with this really sick baby that I couldn’t hold. I’m really really grateful for Gideon. He’s just so sweet and cuddly. I know that if he dies I would never be angry with God. I would never be angry with the doctors because I’m just grateful we’ve gotten to know him.”

While Hobbs balances caring for Gideon, she also has a three-year-old son at home as well as an eight-year-old daughter whom she homeschools. While she manages all of this she is also attending nursing school so that she can better care for Gideon. She hopes that with the proper diagnosis and medical care, Gideon will start to improve and doctors will remove the six-month timeline they have placed on his life.

“I just can’t imagine my life without him,” she said. “I can not imagine if I had let them convince me to abort him. I hope other mothers will see him and change their mind about abortion.”