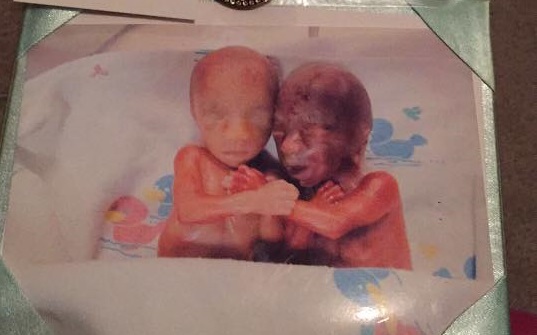 Three years ago, at just 20 weeks and two days gestation, Katrina Villar gave birth to twin boys. Due to an incompetent cervix, Villar was in preterm labor. She dilated too quickly for anything to be done to stop it, and her sons Greysen and Elijah were born too soon to survive.

“It’s been three years and I can still feel the pain, confusion, undeniable love I had for my two sons,” Villar wrote on Facebook. (Update: As of May 29, 2017, the post was no longer available to view publicly.)

An incompetent cervix, also known as a cervical insufficiency, occurs when the cervical tissue is too weak to carry a pregnancy to term. If you know about the condition ahead of time, doctors can perform a surgical procedure called cervical cerclage in which the cervix is stitched closed and then the stitches are removed during the last month of pregnancy. Doctors can also perform extra ultrasounds to monitor the pregnancy and provide progesterone shots if they feel that these steps will be helpful. These treatments can allow a woman with an incompetent cervix to carry to term.

If a woman doesn’t know about the condition ahead of time, it can result in preterm birth and the death of her child. Though children at 20 weeks gestational age (18 weeks post-conception), like Greysen and Elijah, are too young to survive, they have all of their organs and necessary parts and simply need more time to grow and allow their lungs to further develop. Despite their obvious humanity, children at this age are often aborted for a variety of reasons, including emotional state of the mother, financial concerns, and if the child has been diagnosed with a health condition and the parents are too afraid to raise a child with special needs.

At 20 weeks gestation, a dilation and evacuation abortion is the type that would be performed by an abortionist, as shown in the video below:

For mothers who lose their children, as Villar did, the “what ifs” may always be present. One of the hardest parts for these mothers is that so many people don’t consider those children to be people and therefore fail to understand the depth of the mother’s pain.

But as Villar explained, “Day doesn’t go by I do not think of my two angels.”