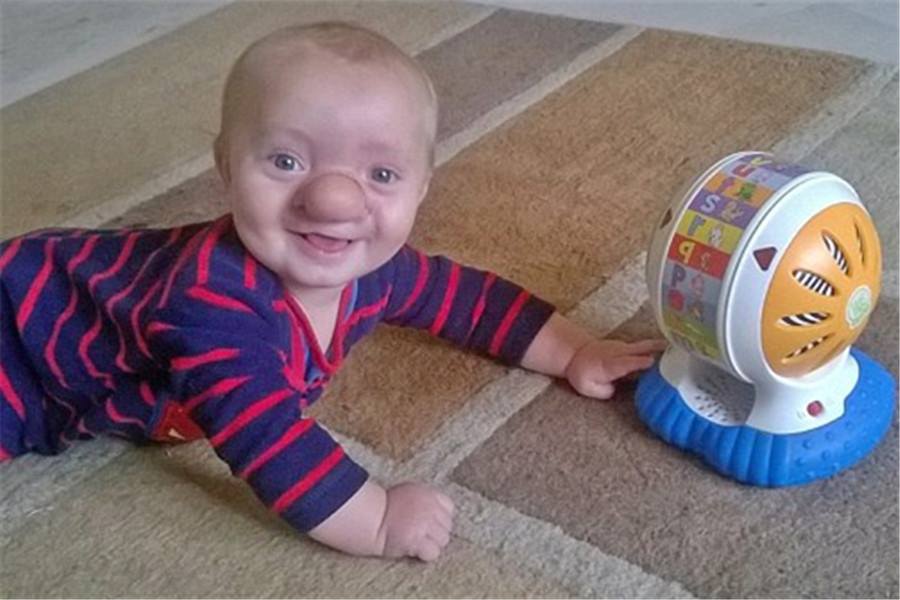 At her 20-week ultrasound, Amy Poole learned that her preborn son had soft tissue growing on his face in an unexpected way. When the baby boy was born in February 2014, Poole was shocked to see his nose – which reminded her of Pinocchio.

“When they gave me Ollie to hold, I was so surprised that I almost couldn’t speak,” Poole told The Daily Mail. “He was so tiny, but there was this enormous golf-ball sized lump on his nose. At first I wasn’t sure how I would cope. But I knew that I would love him no matter what he looked like.”

According to The Daily Mail, after baby Ollie was born, he received an MRI scan which confirmed doctors’ suspicions that he had an encephalocele. An encephalocele occurs when the brain grows through a hole in the skull, creating a protruding sac — which, in Ollie’s case, came through his nose.

Ollie would need to undergo surgeries to move the brain out of the sac and open up his nasal passage so he can properly breathe.

“I was so scared to let Ollie undergo such major surgery,” Poole said. “He was so fragile, and I couldn’t bear the thought of losing him. But doctors explained that he was at risk of contracting an infection or even meningitis if he tripped and knocked his nose – so I agreed to the surgery.”

At nine months old, Ollie had surgery to remove the sac of brain fluid and rebuild his nose.  His mother said that after the surgery, despite having a huge scar across his head, Ollie was all smiles and laughter.

“He is such a character and always has me in fits of laughter,” said Poole. “Plus he and Annabelle are best friends – they’re always getting up to mischief.”

Poole knows that Ollie may not ever look like the other children and worries that Ollie will face the same criticism that she has over his nose and his life. The two of them have received rude and hurtful comments from strangers.

“Once, a woman told me I should never have given birth to him,” explained Poole. “I nearly burst into tears. To me, Ollie is perfect. He is my little real-life Pinocchio and I couldn’t be prouder of him.”