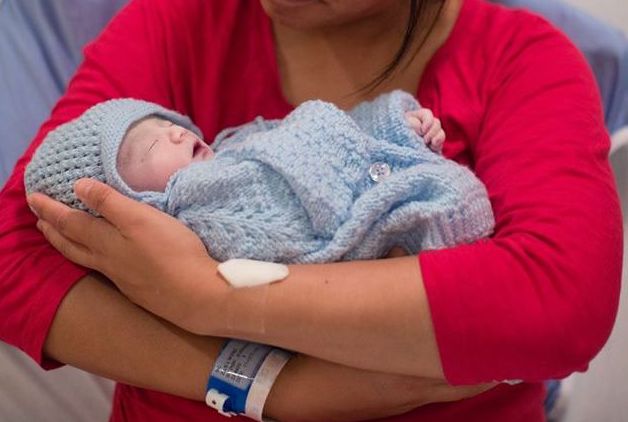 Zana Wing Yau Gray of British Columbia was having a routine 20-week ultrasound for her preborn baby boy when she learned that her son would die shortly after birth. Doctors told her that his kidneys were not functioning properly, and therefore, not producing enough amniotic fluid. Without the right amount of amniotic fluid, her son’s lungs would not be able to fully develop.

Previously, doctors had discovered fibroids in her uterus and had scheduled a C-section in order to have a safer delivery. However, they now told Gray that since her son wasn’t going to survive, they didn’t think a C-section would be worth doing. They advised her to abort.

“They wanted me to do the procedure as soon as possible so he would be smaller and it would be easier,” Gray wrote on Facebook. “They really believed abortion was the best choice for our family as it would mitigate my physical healing time, and we could try for another child sooner.”

Instead, Gray bravely chose to hold onto the hope of a miracle, and cherish each moment she had with her son, no matter how long or short that time might be.

“I struggled with this choice, because if I couldn’t breath[e], I wouldn’t want that experience to be prolonged – but there’s a big difference between letting nature take its course, and injecting something into his heart to stop it, and then inducing labor,” she wrote.

While she wonders if her son suffered as he took his few breaths of life outside the womb, she knew that choosing life was the right choice. She writes that being pro-life means “valuing life no matter how long or how productive it is.” Her pregnancy and labor may have been difficult, physically and emotionally, but she believes it was worth it.

“I am so grateful I got to see his beautiful little face with eyes so much like mine and mouth and chin just like his dad’s (totally perfect and unsquished because he came out bum and foot first,” she wrote. “His crying was the best sound I’d ever had the privilege of hearing, because it meant he was alive!”

Gray writes that she is grateful for the family and friends who stood by her and took care of her and her family. She also mentioned the team of doctors who helped her, and she thanked God for helping her get through the pain.

Gray tragically lost her son, however, research is now being done in the United States in hopes of saving preborn babies with kidney conditions like his. Expectant parents Josh and Kelli Shook were recently enrolled in a research study on the amnioport, which allows amnioinfusions to be administered into the womb, supplying the preborn child with the amniotic fluid he or she needs for the lungs to properly develop. This new medical device may help save their preborn son Jude’s life.

Congresswoman Jaime Herrera Beutler‘s daughter was diagnosed prenatally with Potter’s Syndrome, a condition caused by impaired kidney function. She was told her daughter would not survive. She took a chance with the amnioport despite the risks, which include preterm birth. Her daughter was born prematurely, but the amnioinfusions she received helped her to survive. She is now three years old.