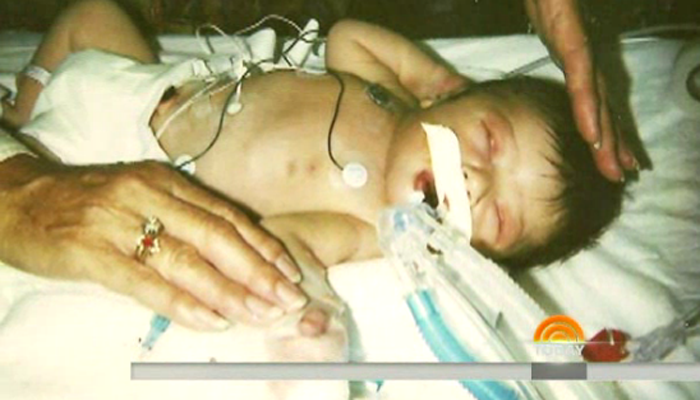 Derek and Annette George were happily expecting the arrival of their baby boy when doctors gave them a grim diagnosis: their son had hypoplastic left heart syndrome, a condition in which half of the heart doesn’t function. They were advised to abort their preborn son, but the couple refused.

“Faith, number one, made us say no,” Annette George told Tamron Hall and Willie Geist on the TODAY show. “The only option that we foresaw with our faith was if our child only had nine months to live, then we were going to give him nine months in the womb and let God decide once the child was born.”

Doctors told the couple to expect that their son would die at birth, but Derek George told TODAY that an angel visited them and told them that everything would be okay. Their son, John Paul George, not only survived his birth, but had three heart surgeries during his first three years of life. He would also endure brain surgery, along with other medical setbacks that could have caused him to give up. Instead, the family remained positive and hopeful through the health struggles, praying and remaining close to God through it all. Now 20 years old, John Paul George attends community college, and though his small stature causes people to think he is much younger, he doesn’t let it bother him. He is considering joining the priesthood after graduation in order to thank God for all that He has done for him.

“I just basically try to thank God for saving my life,” George told TODAY. “If it wasn’t for God, I would not be here.”

The George family credits the miracle to the power of prayer, and has written a book about their experiences called, “Heart of A Lion: A Story of God’s Grace and a Family’s Hope.”

“We want to tell others that, when you’re facing a difficult situation, there is always hope,” said Annette George. “Don’t give up. All things are possible with God.”

Dr. Harold Koenig appeared with the family on the TODAY Show. As the director for spirituality, theology and health at Duke University, he is working to get doctors to believe in the power of prayer. Koenig told TODAY that prayer gives people hope, meaning and purpose, and helps to reduce depression and anxiety.

“Religion and God seems to make a real difference in people’s lives,”Koenig said. “There’s just no question about it.”

Prayer certainly seems to have made a remarkable difference to the family. John Paul George has a positive, upbeat spirit, and he refuses to let his health conditions hold him back, saying that he may not be able to change who he is, but he can change the world as he is.

“He’s a miracle,” Derek George told TODAY. “Twenty years later, what else can I say? It’s black and white.”