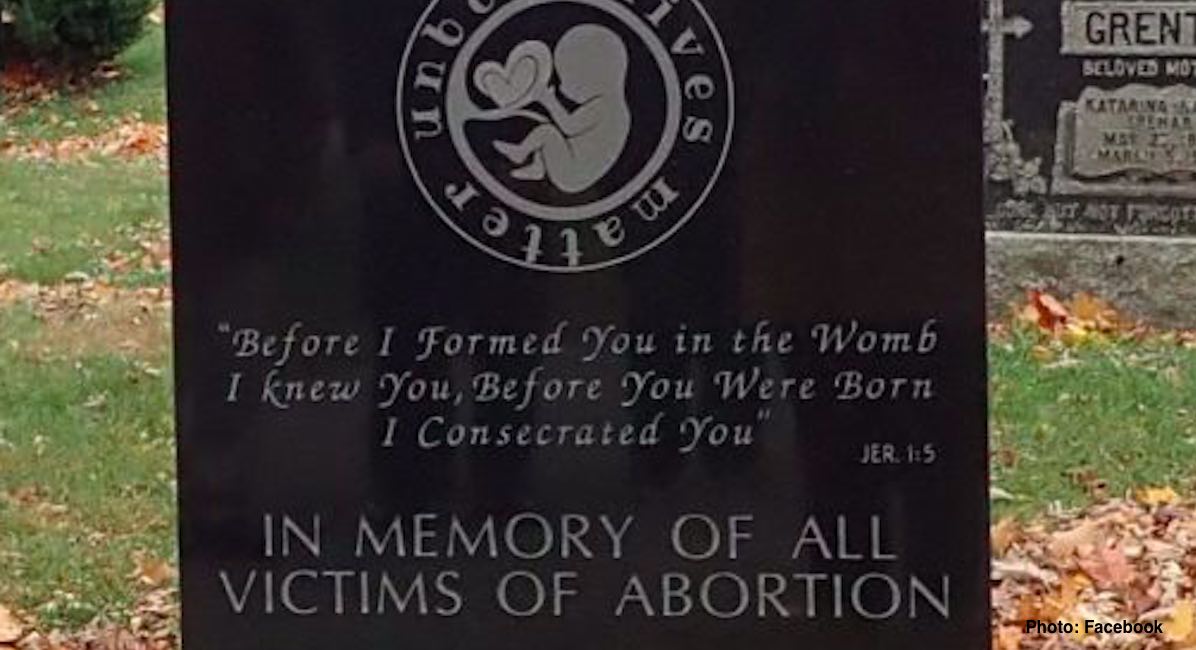 The Knights of Columbus in Belleville, Ontario, recently had a tombstone placed in St. James Roman Catholic Cemetery in memory of babies who have been killed by abortion. After posting photos of the memorial on Facebook, the group experienced angry backlash from Facebook users and a women’s group that may have caused the Knights to remove their original post.

The tombstone reads: “Life is sacred” along with Jeremiah 1-5: “Before I formed you in the womb I knew you, before you were born I consecrated you.” It also states: “In memory of all victims of abortion.” 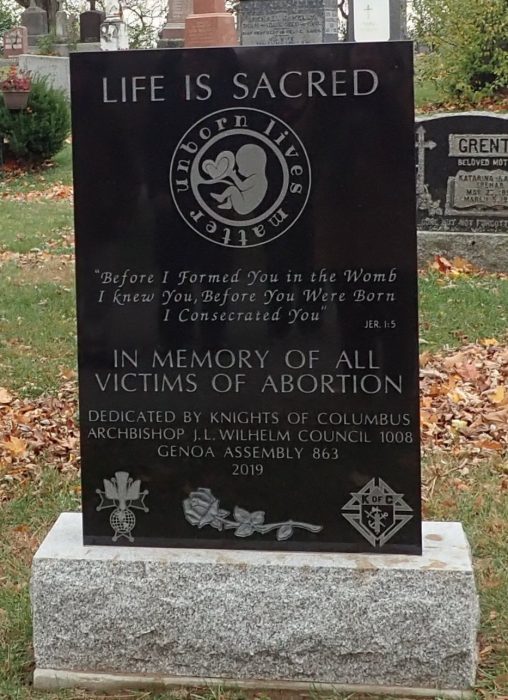 The Knights of Columbus is a Catholic fraternity founded in 1882. The photos the group originally posted on Facebook might be gone, but The Post Millennial said that the comments on the images ranged from supportive to offensive. The 18 males in the photo were called misogynists and ‘crusty white boomers,’ among other insults. In all, it received 3,300 reactions, of which about 20 percent were the angry emoji.

“We’re not engaging in any sort of debate about it,” said grand knight David Cameron. “This is our belief and we don’t feel we’ve done anything wrong… it speaks for itself.”

Memorials like this one are popping up around the world as people want to remember the lives lost to abortion and show respect for these victims just as society traditionally does for other people after their deaths. But that’s not how so-called women’s rights groups see it. Elissa Robertson, the coordinator of Warrior Women of Quinte, actually held a demonstration against the memorial, claiming “[i]t was designed to shame people.”

Robertson also claimed the memorial “ties into patriarchal values and this idea that women’s bodies are meant to be controlled by men. It’s a broader issue that ties into violence against women, it ties into health care, it ties into safety.”

She couldn’t be more wrong. A memorial for someone who has died is not about shaming other people. It’s about the lives lost. If women feel shame about having had an abortion, that’s a normal reaction and one they are feeling not because of a memorial, but because of their own emotions tied to the act of abortion. Women who have abortions are at an increased risk of depression, drug and alcohol use, and suicidal thoughts – whether a memorial is built or not. And in a macabre sort of way, even some abortion facilities offer women remembrances of the babies they choose to abort.

As for the memorial being tied to patriarchal views and violence against women, Robertson is missing the mark. Abortion was legalized by men and tells women that in order to be successful in life they need to kill their children, block their fertility, and be more like men. Abortion tells women that they cannot parent their children and earn degrees or succeed in their careers. Abortion itself is an act of violence against women and children which dismembers one human being and causes both physical and emotional scars for another. Women have been hospitalized for complications of the violent act of abortion, and rape survivors who chose abortion have said their abortions were worse for them than rape, because they were the ones inflicting the violence.

As for health care and safety – abortion is neither health care nor safe. As previously stated, women are hospitalized on a regular basis for injuries sustained during abortion procedures, and they are also dying from legal abortion. Any act that kills a human being or treats pregnancy as a disease is not health care.

Building a memorial to the victims of abortion is the right thing to do to remind people that these were innocent lives stolen through an act of violence and that women and children deserve better. And these memorials don’t just honor the preborn, but the mothers as well. They, too, are victims of abortion.