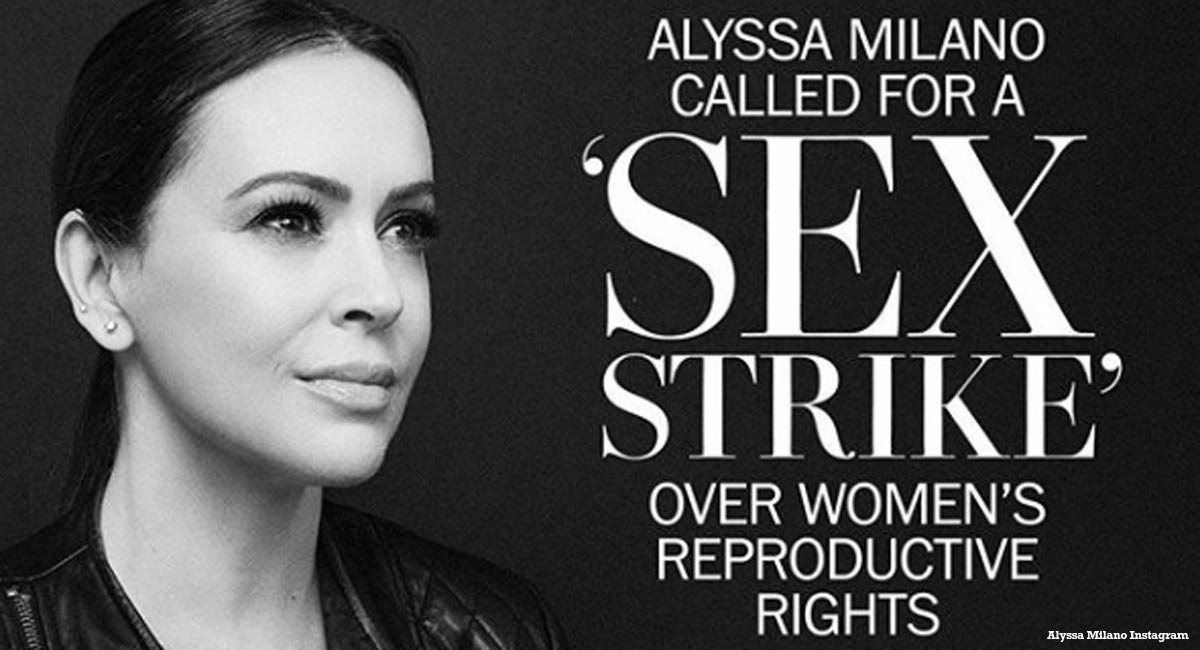 The signing of a Georgia bill that bans abortion after a heartbeat can be detected has Hollywood in hysterics, and no one is fanning the flames more than actress Alyssa Milano. Even though Milano does not live or work in Georgia, she has been extremely vocal about the bill, successfully pushing for Hollywood production companies to boycott filming in the southern state, and then, calling for a “sex strike.”

Milano recently tweeted, “Our reproductive rights are being erased. Until women have legal control over our own bodies we just cannot risk pregnancy. JOIN ME by not having sex until we get bodily autonomy back. I’m calling for a #SexStrike. Pass it on.”

While the irony of abstaining from sex to avoid pregnancy in protest of the inability to get an abortion was not lost on most pro-lifers, Milano’s sex strike was also criticized for another, more surprising, reason: it’s misogynistic. It relies on the idea that a woman’s worth revolves around her body and sex.

On “The View,” co-host Meghan McCain slammed the idea that women should use their bodies to get what they want. “I don’t like ‘clicktivism’ as a general rule,” she began, referring to the idea of using a hashtag or meme to make people feel like they’re doing something when they aren’t. She continued, “I do think people like Alyssa Milano need to understand that there are — women aren’t just one section of the population that are like her. I always feel like, pro-life women are just completely left out of conversations like this, in one way or another. And it doesn’t even occur to her there are women like me out there, that don’t have a problem with this bill.”

It isn’t unusual at all for abortion activists to treat women like a monolith, who think in lockstep and universally support abortion. But the reality is, women are equally as likely to be pro-life as they are to be “pro-choice.” And it’s the opposite of feminism to silence the voices of women, while claiming to act in the name of women, just because some women have an opposing opinion.

But that wasn’t the only anti-feminist problem, according to McCain. “There are a few things I don’t understand in this, but telling women to use their bodies as a bargaining chip, to me, doesn’t seem very feminist,” she said. “And I also think the sexual revolution happened so women could have the agency to have sex with whomever they wanted, and part of the sexual revolution was access to birth control. So you’re leaving out birth control from this conversation, entirely as a whole, and I stand by the fact that this is clicktivism.”

McCain is right that it’s misogynist to fight for women to lay down their bodies as a tool to get what they want… but this is also the crux of everything the abortion movement stands for. Around 150 years ago, the first wave of feminists fought against the injustices women faced, and that included abortion, which allowed those injustices to continue. Decades later, the feminist movement decided to ally with the abortion movement, and now, instead of seeing changes take place that make it possible for women to have children without sacrificing their goals and their dreams, women are expected to put themselves through the violence and pain of abortion.

Whether it’s financial hardship, domestic abuse, a lack of support, a school or employer who discriminates against a pregnant or parenting woman… abortion does not solve the problem. It instead allows the problems to continue, to flourish, while women are left broken and bleeding on the altar of the abortion industry.

When, exactly, will abortion activists understand that women’s bodies are not tools to use and throw away whenever it’s convenient?