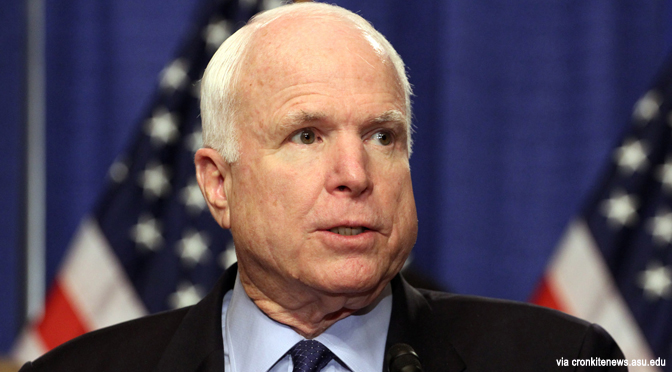 Sen. John McCain (R-AZ) has gone on the record against using the continuing budget resolution due on September 30 to defund Planned Parenthood.

The 2008 Republican presidential nominee was referring to the sixteen-day government shutdown of October 2013 following congressional Republicans’ initial refusal to fund Obamacare. Critics objected that the temporary suspension of some government functions harmed both federal employees and Americans who rely on public services.

But shutdown defenders noted that it left 83% of federal spending uninterrupted, and argued that because the House sent the Senate numerous spending bills to reopen the government, the blame rested with then-Senate Majority Leader Harry Reid and President Barack Obama for refusing to agree to them.

Republican presidential candidates Sen. Lindsey Graham and Gov. John Kasich have echoed McCain’s position, while on Friday one of their competitors, Sen. Ted Cruz, denounced GOP leadership as “weenies” for their reluctance, characterizing Senate Majority Leader Mitch McConnell’s view as “I will only do what Harry Reid agrees because I need 67 senators — I need Democrats — so I will hand over my vote to Harry Reid.”