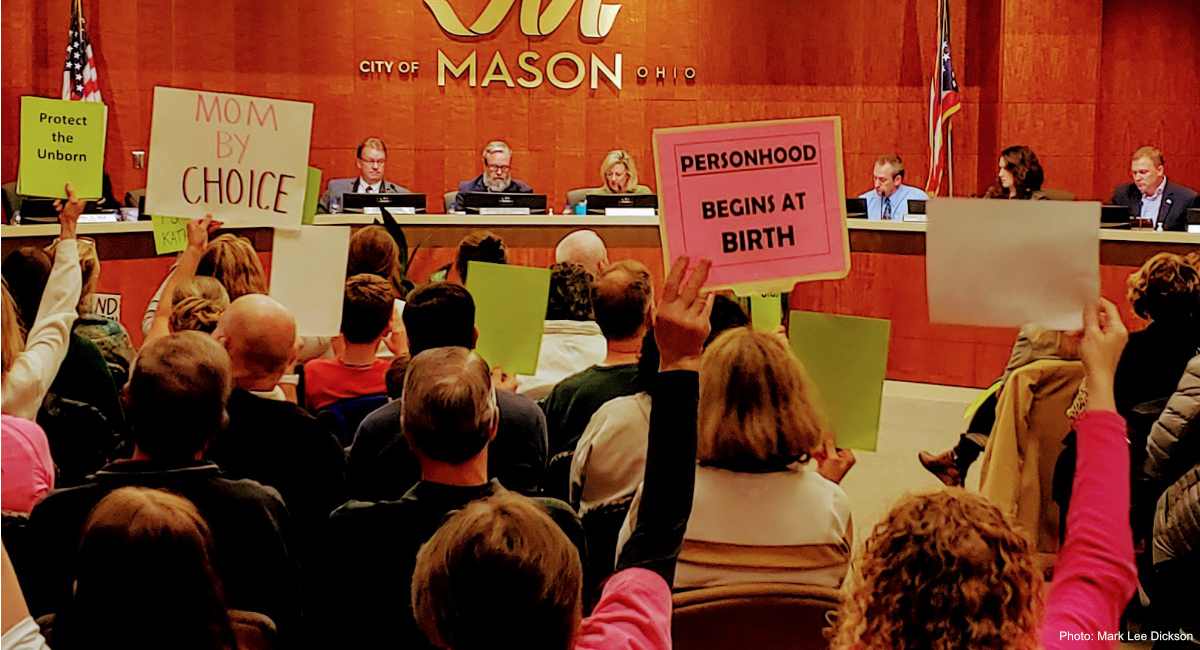 On Monday, the City of Mason, Ohio (pop. 35,450), became the 41st city in the nation and the second city in Ohio to pass an enforceable ordinance outlawing abortion within its city limits. The second and final reading vote passed 4-3 in the packed city council chambers.

Mayor Kathy Grossmann was joined by council members T.J. Honerlaw, Mike Gilb, and Tony Bradburn in favor of the ordinance outlawing abortion, while council members Ashley Chance, Diana Nelson, and Josh Styrcula voted against the measure. While the ordinance passed by a majority vote, the ordinance did not receive the five votes required to go into immediate effect. This means that the ordinance will go into effect on November 24th, which will be 30 days after Monday’s vote.

Mark Harrington, president of Created Equal, was one of the many pro-life leaders present for the historic meeting. Harrington shared, “Joe Biden has stated he wants abortion in every zip code in America. Hence, citizens across America are acting by preventing abortion from being committed in their communities. Ohio is once again taking the lead to protect children and more cities are joining this movement every week!”

Mason is the 24th city to pass an ordinance outlawing abortion since the Biden Administration stated their commitment to see abortion access in every zip code in January of this year.

The first to introduce the ordinance to be placed on the agenda was Councilman T.J. Honerlaw. Upon the passage of the ordinance, Honerlaw shared, “Passing the sanctuary city for the unborn ordinance is my greatest accomplishment while serving my first term on Mason City Council. It’s been an honor to work with my pro-life colleagues to keep abortion out of Mason, Ohio.”

Vice-Mayor Mike Gilb also stood confident in his decision, knowing that it was what his constituents placed him there to do. “I’m here to protect life. For me it’s a fundamental issue . . . I’m not just here to decide how bright the street lights should be or where the next roundabout goes. Those things are certainly important issues, but they’re not as fundamental as protecting life.”

Nelson shared, “The Supreme Court has made a ruling on abortion, regardless of one’s opinion on abortion; creating local laws that contradict with federal laws is illegal and unconstitutional.” Nelson continued, “When local leaders begin enacting laws which are in violation of our resident’s constitutional rights we have a much larger problem.”

Mayor Kathy Grossmann pushed back on Councilwoman Diana Nelson’s claim that they, as elected officials, were entertaining a piece of legislation which contradicted the Constitution, any federal laws, or any Supreme Court ruling. Grossman shared that based on statements from attorneys, the ordinance is consistent with the Constitution, all state and federal laws, and worked within Supreme Court rulings. Grossman asked Vice Mayor Mike Gilb, who is a local attorney, his assessment on the matter. Vice Mayor Gilb shared, “From my review of the ordinance I certainly understand it to be not in conflict with Roe v. Wade and constitutional in the way it is presented.” 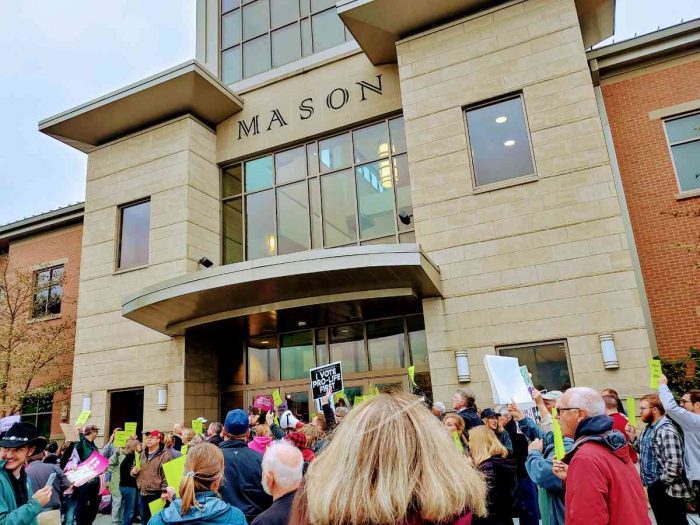 Even though these strong statements are made in the findings section of the ordinance, the Mason Ohio Ordinance does not go against Roe v. Wade (1973), Planned Parenthood v. Casey (1992) or any Supreme Court ruling, but works within those rulings and current federal and state laws to go as far it can go to prohibit and restrict abortion access under the confines of the undue burden standard which was set by the United States Supreme Court in Planned Parenthood v. Casey (1992).

While Councilwoman Nelson raised concern that the passage of the ordinance would open the City of Mason up for lawsuits, no lawsuit has been successful against the Sanctuary Cities for the Unborn movement. In February of 2020, the ACLU sued seven cities in East Texas which had outlawed abortion. After three months, the ACLU withdrew their lawsuit and, to this day, abortion remains banned in each city which was sued. In May 2021, Planned Parenthood and the ACLU filed a lawsuit against the City of Lubbock for outlawing abortion within the city. Before the month was up, Planned Parenthood lost their lawsuit. Due to the ordinance going into effect, Planned Parenthood stopped performing abortions in Lubbock on June 1, and is currently not performing abortions in Lubbock.

If the City of Mason is sued, attorney Jonathan F. Mitchell, the former Solicitor General of the State of Texas and the legal mind behind the enforcement mechanism of the Texas Heartbeat Law, has agreed to represent the city at no cost to the city and taxpayers.

The Mason Ordinance states, “It shall be unlawful for any person to procure or perform an abortion of any type and at any stage of pregnancy in the city of Mason, Ohio,” and “It shall be unlawful for any person to knowingly aid or abet an abortion that occurs in the city of Mason, Ohio.” Abortion is defined by the ordinance as “the act of using or prescribing an instrument, a drug, a medicine, or any other substance, device, or means with the intent to cause the death of an unborn child of a woman known to be pregnant.” The Ordinance is also clear that the act is not an abortion if the act is done with the intent to “save the life or preserve the health of an unborn child” or to “remove a dead, unborn child whose death was caused by accidental miscarriage” or to “remove an ectopic pregnancy.”

There is one other exception listed in the ordinance and that is a very narrow exception for cases where the mother’s life is at risk. This is listed as an affirmative defense and falls upon the one performing the abortion to provide that defense if necessary. This is outlined by the ordinance as abortions in cases where the abortion is “in response to a life-threatening physical condition aggravated by, caused by, or arising from a pregnancy that, as certified by a physician, places the woman in danger of death or a serious risk of substantial impairment of a major bodily function unless an abortion is performed.”

READ: Texas city becomes 40th ‘sanctuary city for the unborn’ in the nation

Many of the opposition in attendance attempted to attack the ordinance for this section, arguing that these drugs had other uses. However, the ordinance is clear that “the term also does not include drugs or medication that are possessed or distributed for a purpose that does not include the termination of a pregnancy.”

According to the ordinance, those who are found in violation are guilty of a misdemeanor in the first degree and, under Ohio law, are not to serve more than six months in jail or pay more than $1,000 in fines. This prosecution or penalty contains only one exception: “Under no circumstance may the penalty be imposed on the mother of the unborn child that has been aborted, or the pregnant woman who seeks to abort her unborn child, be subject to prosecution or penalty under this section.” The implementation of these penalties are not dependent upon the overturning of Roe v. Wade or any other court ruling, but are immediately enforceable.

It is not likely that Mason, Ohio, will be the last city in Ohio to outlaw abortion. On the same night of Mason’s vote, the City of Celina (population 10,687) also discussed an ordinance outlawing abortion. The City of London, Ohio (pop. 10,436), is also considering a similar ordinance.

Ohio State Representative Jena Powell shared, “What a great day in Mason! Thrilled to see that Mason is now a sanctuary city for the unborn. I’m excited to see more cities across our state and nation fight to protect the unborn. It’s crucial that every child is protected in the state of Ohio, and this is a huge step in the right direction.”