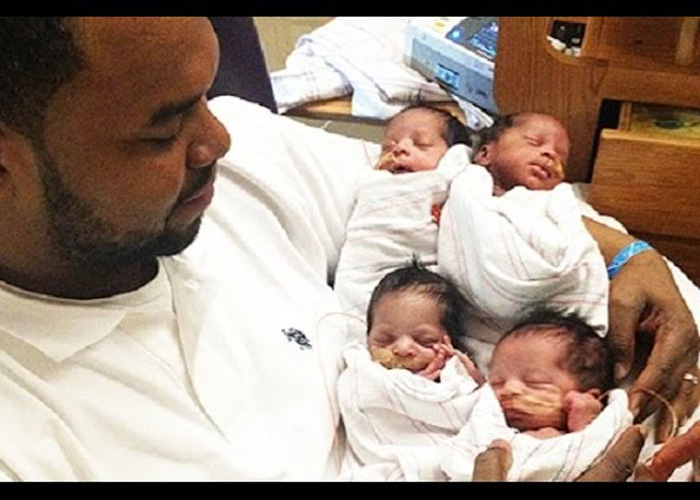 Erica Morales and her husband, Carlos, were expecting to have the best day of their lives when they went to the hospital to deliver their quadruplets. They had finally conceived through in-vitro fertilization and were excited to finally have the babies they longed for. Although Erica had been rushed to the hospital with high blood pressure, the couple had every reason to believe all would be well. Life News reports that Erica posted the following on Facebook while she was in the hospital:

[The doctor] said I have to get admitted until delivery. It’s been down lower today but it’s too late.

He will push deliver up, or stall it to to 34 weeks. I’m 31 tomorrow. He said I did phenomenal. A poster child for quads. He wish they could all go this way, but this last part we have to do it carefully because you can stroke out with bad blood pressure. I’m sure I won’t be  looking at how to finish things.

Tragically, one hour after giving birth to her three daughters and one son, Erica died.  Doctors are still investigating the cause of death, but sadly, Erica was never able to meet her children, Carlos Jr., Paisley, Tracy, and Erica. But, she left her wishes for them in an iPad note, including instructions for them to learn both English and Spanish, attend college, and have successful careers.

Carlos told People that these two events have been the most joyful and most tragic experiences of his life. “I went from having the best day of my life to the next morning experiencing the worst day of my life,” Carlos told People. “My four babies came into the world and then my wife died.”

Carlos intends to see the wishes his wife had for their children fulfilled, and he told People that he will try his hardest to make sure it happens.

I’m learning everything from how to give them a bath, CPR, feeding, and how to manage their sleep schedule. I need to be prepared.

Everything I do now is for my children. Our family and friends have been very supportive, too.

Two of the quadruplets, Carlos Jr. and Tracey, have come home from the hospital, but Paisley and Erica  still remain, and Carlos visits them daily.

Family members and friends are now raising money to help Carlos care for his four babies on his own. As of today they have raised over $300,000. The babies have lost their mother, but their father and family will ensure they are loved and taken care of despite their tragic birth story.