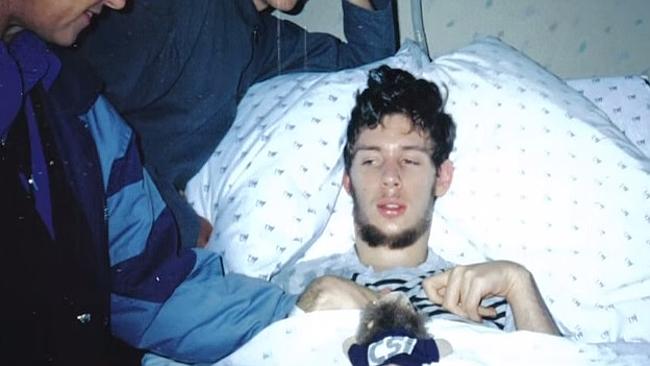 His parents, Rodney and Joan, told National Public Radio (NPR) that the doctors sent Martin home with the instructions to simply keep him comfortable. As far as anyone knew, Martin was simply not there anymore, and his parents were told he had zero intelligence. The doctors said he wouldn’t live long.

But Martin didn’t die. And as the time went on, a schedule was born. Each morning, his father would get up at 5 o’clock, get Martin dressed, and bring him to a special care center. Eight hours later, Rodney would pick Martin up, bring him home, bathe him, feed him, and put him to bed. An alarm would go off every two hours during the night so that his parents could turn Martin in order to prevent bed sores.

This life went on for 12 years, no one thinking Martin could understand anything that was happening.

Joan says that she has a strong memory of looking at Martin one day and telling him, “I hope you die.” She knows it was an awful thing to say, but she was emotionally and physically drained. She also never imagined that her son could hear and understand her. Except Martin was aware of what was happening almost the entire time. Martin says that about two years after entering the “vegetative” state, he began to wake up. And he says he was completely aware but unable to move. In his book, Ghost Boy: My Escape From A Life Locked Inside My Own Body, Martin writes about what life was like during those years.

“Everyone was so used to me not being there that they didn’t notice when I began to be present again,” explains Martin. “The stark reality hit me that I was going to spend the rest of my life like that – totally alone.”

Martin felt doomed. Doomed to a life without tenderness and love and with no way out, Martin decided to disengage his thoughts. He endured the daily routine, listening to his mother wish him dead, being neglected and abused by nursing staff, and watching hours of Barney at the special care center.

“I cannot even express to you how much I hated Barney,” he says.

The more time that went by, the more Martin wanted to regain his life. He began to allow himself to think again, and as his mind and heart healed, his body did, too.

Martin told NPR that he began to live in his imagination, and over time, he began to take control of his body. It started with the ability to squeeze someone’s hand. He was able to sit up better. At this point, the doctors told his parents he was only as smart as a 3-month-old. Thankfully, one of the nurses was able to convince his parents to get a second opinion. He was given a test in which he had to identify different objects, and he passed the test.

His mother left her job and started working with Martin every day. He was eventually able to communicate with a joystick-like switch for a computer. From there, his life kept improving – from getting a job to starting a company to going to college. Today, Martin is happily married.

Martin’s story is nothing short of amazing. It begs us to ask the question: How many people are living right now, like Martin did for 12 years? Terri Schiavo was more responsive than Martin was for years, yet she was starved to death. Was she aware the entire time of what was being done to her? There are people living at this very moment in a “vegetative” state, just like Martin was. Many of them are being treated as if they aren’t there, as if their lives no longer matter.  But with Martin’s story as proof that life always matters, can we really afford to continue to make these assumptions? Can we continue to believe that starving a person to death is the right thing to do when we could be working harder to engage him and provide him with therapies that may help them regain his abilities?

All lives matter. Martin’s does, and miraculously, he was able to prove that.