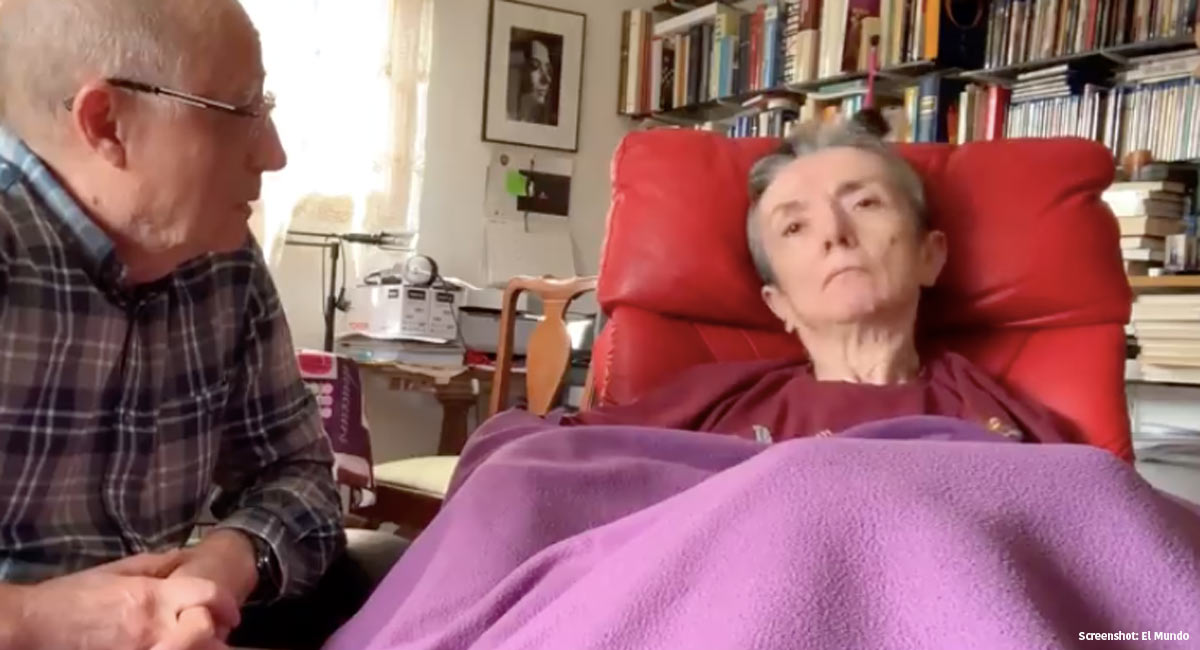 A man in Spain has reignited the euthanasia debate after publishing a shocking video of himself illegally assisting his wife commit suicide. Immediately following the incident, the Spanish man, Ángel Hernández, turned himself into police custody. His wife, María José Carrasco, 62, was diagnosed with multiple sclerosis 30 years ago. His actions have reignited the debate over euthanasia in Spain.

The dramatic, public, and exploitative act of assisted suicide has become a flashpoint in Spanish politics and society especially ahead of the April 28th elections. Prime Minister Pedro Sánchez of Spain, of the Spanish Socialist Workers’ Party (PSOE), leads a minority government that has thus far been blocked from implementing its proposed euthanasia legislation; however, he vowed to renew his push for it. “Having seen these images, I feel absolutely overwhelmed, moved, but I must say that I’m also in part outraged, because this should have been avoided,” Prime Minister Sánchez said in reaction to the video.

The President of the Spanish Bishops’ Conference, Mons. Luis Argüello, asserted that “induced death is never the answer, neither in the case of abortion nor euthanasia.” Acknowledging that the situation was “exceptionally emotionally charged,” Mons. Argüello reiterated the evils of assisted suicide, while also pointing out that the Church supports palliative care to ease suffering in difficult cases. “I’m not saying anyone in this case should go to prison,” he said in a press conference, according to My San Antonio. “What I’m saying is we have to provide support for all options other than the view that death is the solution.”

The exploitative video is divided into two scenes filmed on consecutive days in early April 2019. In the first part, Hernández asks his wife a series of questions. “Do you still continue with the idea that you want to commit suicide?” he asks his wife. “Yes,” she replies. “Do you know that I have to assist you, that there is nobody who can assist you?” “Yes,” she responds again. “Today is the 2nd of April, 2019. … Would you like me to prepare it and that we do it tomorrow?” “Yes,” she replies. “Okay, well there is nothing more to say.”

READ: People with disabilities and terminal illnesses speak out against assisted suicide

The video’s second part, filmed on April 3rd, consists of Hernández standing by his wife’s bedside during her final moments. “María José, the moment has arrived that you so desire. I am going to give you my hands. That is what you are not able; I am going to give you my hands.” He first begins by administering water to her to ensure she can swallow. “What do you think?” “Yes,” she responds. “I will give it to you then,” he says. “Are you decided?” “Yes,” she replies one last time. He then administers a fatal dosage of the the pentobarbital drug.

The video, posted by Spanish outlet El Mundo, fades to a black screen before she takes the fatal sip. Text appears on the screen: “Seconds later, María dies. El Mundo has preferred not to publish these images.”

Hernández is currently being tried for assisted suicide and may also be tried for gender-based violence due a recent Supreme Court ruling in Spain that defined all violence perpetrated by males against females within a separate category. If convicted, Hernández could face between two to five years in prison for assisted suicide, and two to three years for gender violence.