The presence of birth defects found before a child is born will often cause his parents to make a life-or-death decision about their child. Do they risk the unknowns and have a baby who could potentially be “abnormal?” Or do they “dispose” of the child and any potential “problems”?

While some children may be able to live with abnormalities, others will not live long on this earth. One such group of children who are not expected to live long after birth are those with anencephaly. Anencephalic children are born with a brain stem, but without the parts of the brain that are located above the brain stem. The top part of the child’s skull does not form. Life expectancy of the 73% of children who survive birth is between hours and days.

Years ago, medical textbooks referred to these children as “monsters,” but thanks to one midwife, that was changed. 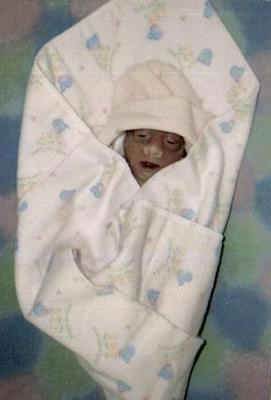 In the 1980s, this midwife was examining a pregnant woman but could not find which part was the head of the unborn child. An ultrasound revealed that the child had anencephaly. Those who looked up that term in Oxorn’s Human Labor and Birth found that the child would be born looking like a monster. According to the midwife:

Imagine birthing knowing that your baby will die in the first couple days. Add to that the underpinning of having heard and read that your baby is known as an anencephalic monster. Imagine how we all felt, the medical and nursing staff, anticipating that a monster was soon to be born.

The day came when the little girl was born, but she was no monster. The midwife described her as having “a sweet face and rosebud lips.” A hat was placed on her head to cover up the fact that the back of her head was missing. The girl lived for three days, and was held by her father as she died. The midwife continued to be a support to the family as they grieved the loss of their daughter.

Later, the midwife was reading Oxorn’s Human Labor and Birth and came across his monster definition. And she decided to challenge Dr. Oxorn on his use of descriptions:

I asked him if he had ever thought about the fact that most parents start to fall in love with their baby while he/she is still in utero. That the soon-to-be child starts to have a life, a future, and a past all at once before birth. How DARE he and all other writers of textbooks refer to these babies as “monsters”! What on earth could be gained by perpetuating that term?

The doctor responded with an apology, saying that he would change the description in his next edition. And he did. According to the midwife:

While parents expecting children with anencephaly will need to be prepared for the birth defects and shortened life expectancy, no child deserves to be called a monster. And thanks to this midwife, the academic perception of anencephalic children has changed from monsters to humans!

Check back with us every Friday for a new Life of the Week column!