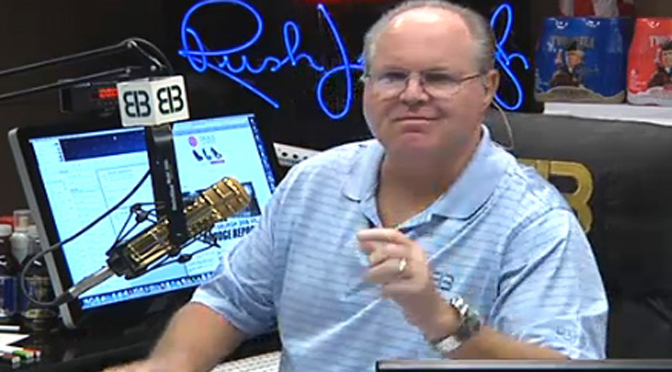 Say what you want about the pro-abortion zealots at Raw Story and Media Matters, but they never miss a chance to portray their targets as cartoonishly horrible as possible. On Wednesday, they seized upon a snippet of Rush Limbaugh’s radio show in which he allegedly claimed the “‘typical low information woman’ wants to sell her aborted fetus for profit.”

What a misogynistic generalization about women in crisis! What else should we expect after the horrible things he said about Sandra Fluke?

Except… that’s not what he said.

For proof, we need not even review the tape, because David Edwards’ own write-up contains the context his headline leaves out:

“Now that these mothers are finding out that their gestational tissue has been sold to the highest bidder, watch for the lawsuits for them wanting to demand their share of the profits from what they thought was being donated,” Gabe told Limbaugh.

According to Limbaugh, part of Planned Parenthood’s strategy was to lure in “low information people,” and then profit off of their abortions.

“Everybody wants to matter, everybody wants to think they are contributing to the advancement of the human race, even when they are having an abortion,” he laughed. “So Planned Parenthood can convince them that they are furthering humanity by doing this.”

Limbaugh agreed that Gabe was “probably right” about women wanting to profit from their abortions.

“The typical low information woman who thinks that she is serving humanity, then finds out that she’s being screwed and wants her take — especially after what the abortion cost her — she’s going to want her take of what they’re selling,” he opined. “[She’s] going to want her Lamborghini too right along with Ma Richards daughter, who wants here Lamborghini. It’s a good point, Gabe.”

Limbaugh’s not generalizing about women, uninformed or otherwise. He’s not even painting all post-abortive women, i.e. those who sought abortions out of desperation. He’s referring to low-information abortion seekers who embrace the abortion-as-positive-good propaganda. And in point of fact, he’s not even talking about cash for greed’s sake, but for getting money they believe Planned Parenthood scammed them out of.

Is it wise to focus criticism on abortion seekers rather than abortion peddlers, even a subset? Not necessarily. Is it the most important part of the story? Not by a long shot.

But it’s not what Raw Story or Media Matters implied, either. People’s reactions to learning Planned Parenthood profited off something they thought they were “donating” for a charitable purpose (assuming they knew their fetuses would be used for anything in the first place) is an interesting subject and a predictable side-effect of Planned Parenthood’s duplicity. Exploring the duplicity no more insults women than any of the million other fake controversies of the War on Women.

The good news is that attacks like this are dead on arrival to anyone who actually bothers to read the whole thing. The bad news is that the content doesn’t need to be persuasive to accomplish Media Matters’ or Raw Story’s objective. So much of what these propaganda mills churn out isn’t meant to persuade, but merely to provide grist for the rank-and-file’s perpetual outrage.

As long as there’s a hyperbolic title to show up in Twitter feeds and some stuff that looks about right when you skim it, voila! A talking point is born.