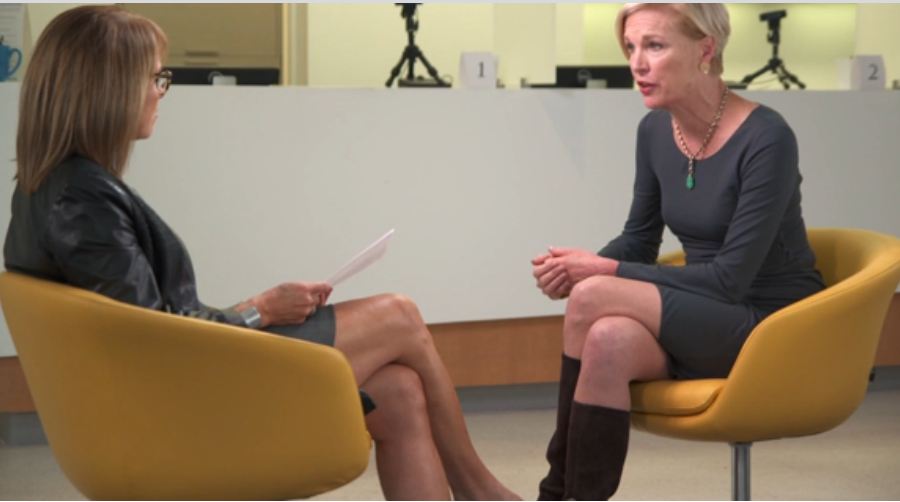 Katie Couric’s recent tour of a $4.5 million Planned Parenthood abortion center in Queens, New York, interestingly failed to show viewers the room where aborted babies are stored, potentially in freezers – the “POC” (products of conception) room.  A common feature of every abortion facility, undercover video released by the Center for Medical Progress (CMP) showed how staffers working in a POC room at a Houston Planned Parenthood stored aborted babies in a freezer. In that video, CMP actors posing as fetal tissue procurement agents were taken into Planned Parenthood’s back pathology room where they ask to view any “fresh specimens” (i.e., aborted babies). With a smile on her face, the Planned Parenthood assistant told CMP, “We had a really long day and they are all mixed up in a bag.” Then they tell CMP that they keep the “specimens” frozen.

In a transcript from April 9, 2015, CMP detailed a conversation they had with Melissa Farrell, Director of Research for Planned Parenthood Gulf Coast, in which Farrell states:

In another portion of the conversation, Farrell told CMP:

Under a sample acquisition protocol where everyone that’s coming in gets approached, not just African-American or whatever, everyone gets approached about donating fetal tissue, maybe we can even think, and I recognize that a lot of this has to be fresh, but maybe even banking, a tissue banking part, that we have it built into the consent form-protocol-in the event that you don’t have a use-first trimester, you don’t have a use for it currently, you saw the refrigerator freezer space we have, we have plenty of space. We can store it, and then if you have a need, because some researchers start with frozen specimens or preserved specimens first, we could look at doing that as well. During the walk-through of the Planned Parenthood, investigators identified two locations where biohazard waste was stored. The first one, although it contained bio-hazardous waste, did not contain any fetal tissue. But when inspectors asked if there were any other places where “POC’s” or products of conception were kept, Planned Parenthood staff replied, “Yes, in the POC room in the freezer.”

According to the inspection report, inspectors followed the Planned Parenthood staff into the “POC room” and opened the “upright freezer which had a biohazard sticker in the top right hand corner.” Inside the freezer were several metal shelves lined with blue disposable pads. One shelf had a large red plastic biohazard bag that was tied with numerous (in excess of 20) smaller red plastic bags, the report stated.

Planned Parenthood staffers told inspectors that “individual products of conception” (or as pro-lifers rightly describe them, aborted preborn children) are placed in a smaller red biohazard bag after examination by the abortionist. They are then placed in the large bag in the freezer, the inspection report notes.

Inspectors then asked Planned Parenthood staffers what the next step would be for the “fetal tissue” or preborn aborted children in the freezer. Abortion workers told inspectors that on the day of “medical waste… pick up” that the large bag would be placed in a cardboard box in the “biohazard room” and sealed and labeled where a manifest would be generated. It would then be passed off to the “transporter” or the medical waste pick up company. In addition to finding aborted babies stored in freezers, which is not in and of itself illegal, officials suspended the license of the Columbia South Carolina Planned Parenthood after officials discovered several health violations. South Carolina Department of Health and Environmental Control’s Bureau of Health Facilities Licensing and Bureau of Land and Waste Management detailed the gross violations in a September 11, 2015, letter addressed to South Carolina Planned Parenthood CEO Jenny Black, which included the following:

Documentation of personal background information on two staff members was not available for review.

The facility did not have documentation on training in infection control for two staff members.

The facility did not comply with a provision of the Women’s Right to Know Act… In five of 25 medical records reviewed, the record documented that an abortion was performed sooner than the required 60 minutes after an ultrasound.

Planned Parenthood did not adhere to and follow provisions for tissue examination and disposal and did not have a written policy and procedure regarding registration of fetal death or death certificates.

Planned Parenthood’s emergency drug cart did not have a listing of contents on the cart.

Expired medications were stored in the patient care areas and pharmacy.

Products of conception resulting from abortion procedures were not managed and properly disposed of by incineration according to regulations.

Several abortion records involving minors did not include the names of their mother or father.

In 25 out of 25 of the medical records reviewed by inspectors, the names of clinical assistants in attendance during abortion procedures was not documented in the record.

Sterile gloves were stored and mixed with non-sterile supplies including non-sterile examination gloves.

Waste meeting the definition of “infectious waste” was not managed and properly disposed of by incineration.

Despite previous claims from CEO Jenny Black that monetary penalties were not issued, the document also shows that Planned Parenthood was fined $7500 and was ordered to submit a plan of correction.

The Island Packet detailed what happened next:

Planned Parenthood paid a $7,500 penalty for 21 cited violations and submitted correction plans by the Sept. 28 deadline but asked DHEC to reconsider some of the violations, putting the suspension on hold… DHEC cleared Planned Parenthood’s Columbia clinic on Nov. 6, and the organization withdrew its request, Department of Health and Environmental Control Director Catherine Heigel said.

But back to Katie Couric… In another segment of her Yahoo News interview, Cecile Richards told Couric – whose poor excuse for journalism was identified as “free advertising” by Live Action’s Calvin Freiburger – that Planned Parenthood is “a compassionate health care provider.” She then boldly stated that she has invited “every member of Congress, anytime, come and visit Planned Parenthood; see what we do.”

To date, no one has taken Richards up on that offer, but given these recent findings by health inspectors in South Carolina, maybe they should.

Health code violations and aborted babies in freezers are a part of Planned Parenthood’s story. It’s just unfortunate that a so-called journalist like Katie Couric is too biased to report the whole truth.