Planned Parenthood CEO Cecile Richards expressed her delight today on Twitter over a shout-out on Jeopardy!, the world-renowned game show with that jingle you’ll struggle to get out of your head after reading this. 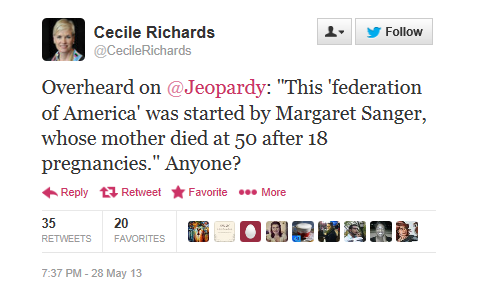 Pro-life leaders noticed that Richards’s tweet, and the Jeopardy! prompt itself, were strangely lacking:

Live Action President Lila Rose, for her part, wondered whether Jeopardy! could have used a more elucidating prompt. Followers eagerly responded in the affirmative.

Lest you think this is nothing more than a great “zing Cecile Richards” opportunity, there’s something crucial to keep in mind here. It’s pretty clear why Richards was so delighted: this prompt could have come out of Planned Parenthood’s PR department. It’s a textbook “have your cake and eat it, too” moment: America’s number-one abortion corporation gets free advertising without anyone discovering the inconvenient detail that Planned Parenthood is America’s number-one abortion corporation.

Put aside the “life versus choice” debate for a second. We’ve got to be clear about this: the fact is, a huge number of Americans don’t even know that Planned Parenthood does abortions. Pro-life activists tend to forget this, because we’re immersed in fighting for pre-born children. We know who’s killing the overwhelming majority of them in America.

But for too many Americans, “Margaret Sanger” might be that British prime minister who died recently. (Even the word “eugenics” might elicit nothing more than a shrug of the shoulders, to say nothing of “human weeds.”) Planned Parenthood might be just another Contraception Я Us (with a sterling reputation), or another mammogram repository that totally, totally offers mammograms. And abortion? That’s just a choice that happens sometimes.

What is Planned Parenthood?

That’s the question Jeopardy! challenged its contestants to ask. Live Action’s been challenging people to ask that very question for years – but unlike Jeopardy!, we’re providing the answer, too.

Granted, a more informative prompt would have said something like “This $1.2-billion company commits more abortions than any other in America, and you pay for it.” All the same, big thanks to Alex Trebek ­– and small thanks to abortion-giant CEO Richards – for another opportunity to get the truth out there.

(P.S.: Take another look at that Jeopardy! prompt. For the record, Margaret Sanger’s mother died of tuberculosis and cervical cancer, neither of which is caused by pregnancy. So to say that Sanger Mère “died at 50 after 18 pregnancies” is like saying that Chopin died at 39 after four ballades – technically true, but the wording is pretty sketch.)