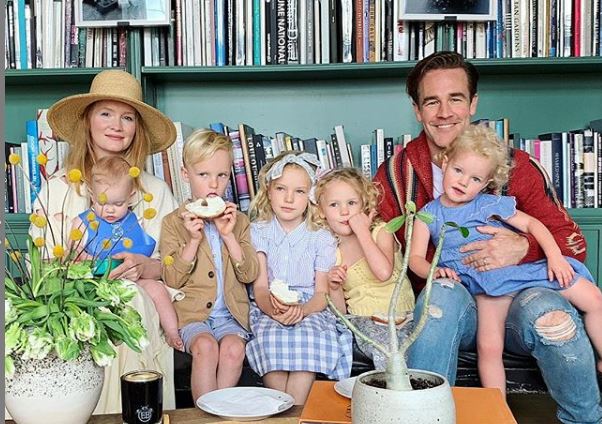 Last month, actor James Van Der Beek had some joyous news. Van Der Beek, who has been competing on “Dancing With The Stars,” shared an ultrasound on the show, announcing that he and his wife, Kimberly Van Der Beek, were expecting their sixth child. The couple has five living children, and had previously suffered three devastating miscarriages. Tragically, however, on last night’s show, Van Der Beek had an emotional update: they had yet another pregnancy loss, and his wife almost died in the process as well.

Previously, the couple had expressed relief to hear the heartbeat on an ultrasound, in a moment they shared with the “Dancing With The Stars” audience. “So excited. There’s a new little Van Der Beek in there!” Van Der Beek said, while his wife exclaimed, “Oh, that’s the best sound!” But sadly, the update they had for the audience was not a happy one. Before one of his dances this week, Van Der Beek shared that they had lost their preborn child, a baby boy. “My wife Kimberly and I went through every expecting parent’s worst nightmare. We lost the baby,” he said in a video. “The little soul that we had expected to welcome into our family took a shortcut to whatever lies beyond.”

Clearly struggling with his emotions, he continued, “You never know why these things happen, that’s what I’ve been telling my kids. All you know is that it brings you closer together, it breaks you open, it opens up your heart, it deepens your appreciation. It makes you more human.”

After his dance, which he dedicated to his wife Kimberly, Van Der Beek and his partner, Emma Slater, fell to the floor, with Slater embracing him as he audibly sobbed.

Afterward, Van Der Beek took to Instagram to share more of how they were feeling following this devastating loss. “We’ve been through this before, but never this late in the pregnancy, and never accompanied by such a scary, horrific threat to [Kimberly] and her well-being,” he wrote. “Grateful that she’s now recovering, but we’ve only just begun unpacking the layers of this one.”

He continued, “As many of you have said, ‘There are no words…’ and it’s true. Which is why in a time like this it’s enough to know that you’re there. Grieving AND counting our blessings today.”

Wrecked. Devastated. In shock. That’s how we’re feeling right now after the soul we thought were going to welcome into our family in April… has taken a short cut to whatever lies beyond this life. We’ve been through this before, but never this late in the pregnancy, and never accompanied by such a scary, horrific threat to @vanderkimberly and her well-being. Grateful that she’s now recovering, but we’ve only just begun unpacking the layers of this one. Thank you to all of our friends and co-workers (and dance partners) who have shown up for us so beautifully during this time. As many of you have said, “There are no words…” and it’s true. Which is why in a time like this it’s enough to know that you’re there. Grieving AND counting our blessings today.

Kimberly likewise spoke out on social media, in a video she posted to her Instagram stories. “We lost our baby boy – by the way – and I almost lost my life, which is not a story that has been told,” she said. “But at some point, I can dig into the details with you guys about what happened in the emergency room.” She added that while she wasn’t ready to talk about what had happened, she would be soon.

In an interview with PEOPLE, Van Der Beek explained why the couple was so open about their pregnancy losses. “It’s a part of life,” said. “It really helps to go through when you have the support of friends and family. People so often go through it in secret. You need to allow yourself space to grieve and go through it. For us, we walked out incredibly happy and excited. The only advice I have is that you can’t reason your way out of it and you can’t talk your way out of it. You just have to let yourself go through it and go through the journey and be there for each other.”