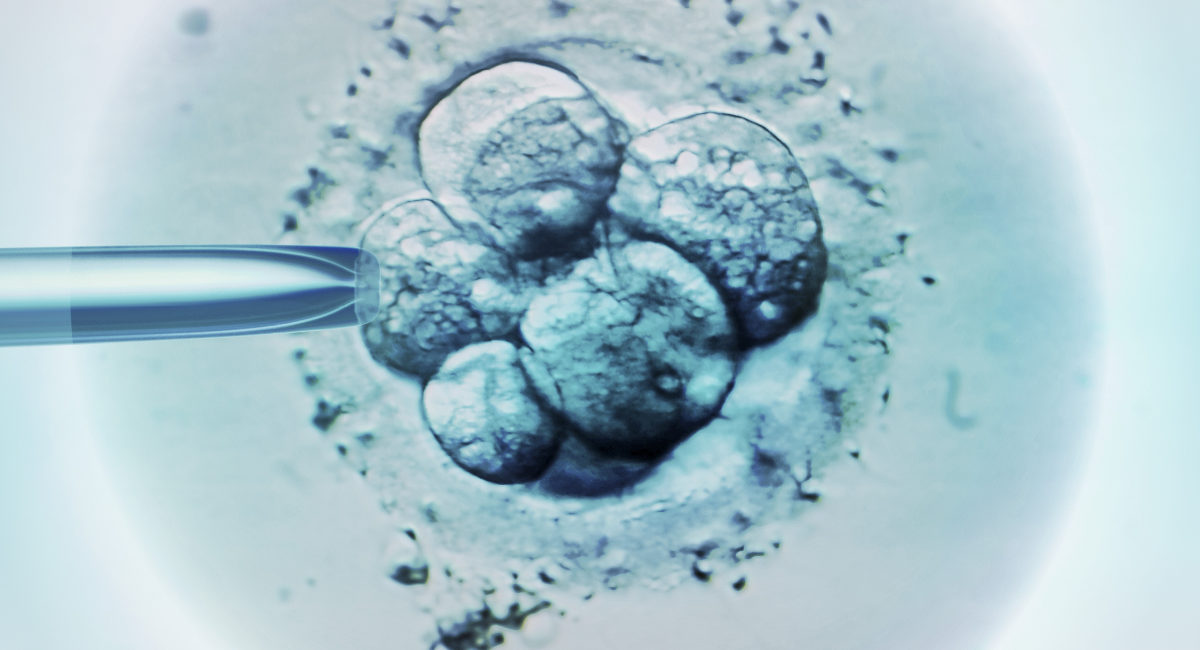 In-vitro fertilization (IVF) is carried out 2.5 million times annually around the world — but each year only 500,000 babies are actually born from the IVF procedure, according to research published in Reproductive Biomedicine Online. That means that each year, if just one embryo is created during each IVF cycle (the average is seven), at least 80% — at least two million — of the human beings created through IVF either die during the process, are frozen indefinitely, or are destroyed.

According to the World Health Organization, there are 73 million induced abortions each year around the world and 29% of all pregnancies end in induced abortion. This means that when comparing rates — human beings are being destroyed by IVF at a higher rate than they are by abortion.

A survey published by the Journal of Assisted Reproduction and Genetics found that about 73% of U.S. fertility clinics offer gender selection. Couples can also test their embryos for traits they don’t want them to have, like inherited diseases, and then destroy the ones who do not meet certain standards. Embryos are also destroyed for being “extra.” It is also standard practice to discard certain embryos who don’t make the cut, even though it is possible for them to self-correct and survive to full-term delivery.

According to research from the UK’s Human Fertilisation and Embryology Authority (HFEA), the nation’s fertility industry regulator that has been recording the IVF processes for more than two decades, from 1991 to 2012, 3.5 million human embryos have been created by IVF in the UK. About 1.4 million were implanted but fewer than one in six of those human embryos resulted in a pregnancy. Nearly 1.7 million were discarded unused with a further 23,480 being discarded after removal from storage. 840,000 were put into storage in hopes of being used for a future pregnancy, while nearly 8,000 were stored for donation to either other couples or research.

Essentially, just seven percent of the embryos created in that time frame in the UK were actually born.

According to the HEFA spokesperson, more embryos than needed are created so that the “best ones” can be used. “Those embryos that are discarded may no longer be needed by the individual or couple for treatment. In these circumstances they can decide whether to donate the embryos to a research project, another couple or ask the clinic to destroy them,” the spokesperson said.

These are living human embryos — created to fulfill an adult’s desire to have a child, only to be discarded or frozen indefinitely as if they are “extra.”

“It happens on a day-by-day basis with casual indifference. This sheer destruction of human embryos – most people would not know that it took place on such a scale,” said Lord David Alton of Liverpool.

According to the Centers for Disease Control and Prevention (CDC), in the United States, there were 330,773 assistive reproductive technology procedures in 2019 reported from 448 clinics. Those cycles resulted in 83,946 babies being born alive. In addition, a report of clinics that are members of the U.S. Society of Assisted Reproductive Technology (SART) found that of the 91,090 IVF cycles using non-donor eggs in 2015, only 27,186 babies were born — about 30%. These numbers show that up to 75% of the human embryos created in the United States each year do not make it to implantation or birth. According to the CDC data, about 120,000 eggs and embryos were frozen in 2019 for possible future use.

The question remains, however, whether those frozen embryos will ever receive the chance to be born.

There are estimated to be about 1 million embryos frozen in the United States, many of them abandoned by their parents. Dr. Craig Sweet runs a fertility clinic in Florida, and told the Associated Press in January 2019 that about 18% of his clinic’s frozen embryos have been abandoned – some for as long as 25 years. By August 2019, just seven months later, Sweet told NBC that the percentage of abandoned embryos in his clinic was up to 21%. There is no limit on how long embryos can remain frozen in the United States, and fertility clinics don’t know what to do with the ones that have been abandoned.

“The American Society for Reproductive Medicine (ASRM), the main guiding society for fertility doctors, has put out numerous papers indicating embryos are deserving of respect,” Sweet told NBC. “This idea of abandoned embryos is an ethical conundrum.”

In March 2018, two fertility clinics in the U.S. had storage bank malfunctions, killing the frozen embryos and making frozen eggs unusable. Families who were paying up to $500 a year to store their children were devastated and many took legal action. Three cancer survivors were represented by pro-abortion attorney Gloria Allred, who argued that the fertility clinic violated the federal Magnuson-Moss Warranty Act for consumer products.

In the UK this year, the government increased the limit on how long embryos can remain frozen — from 10 years to 55 years. Health Secretary Sajid Javid claimed, “By making these changes, we are going to take a huge step forwards — not just for giving people greater freedom over their fertility, but for equality too.”

Excluded from this so-called equality, however, are the human embryos who were once so desperately wanted, but were soon given the label of ‘unwanted.’ The level of human destruction in the fertility industry makes it clear that human embryos are not receiving the respect that Sweet claims they are owed — in either abortion facilities or fertility clinics.