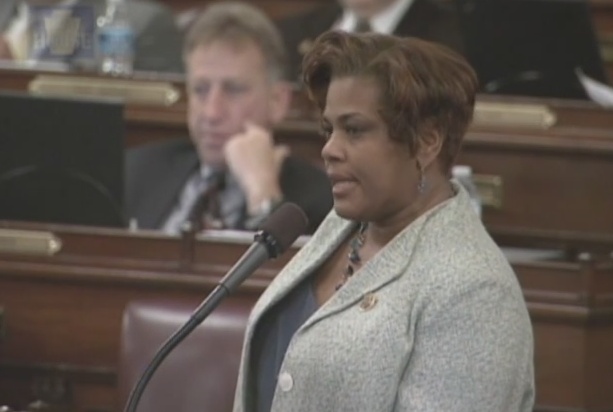 Almost a year ago, Live Action News brought you the story of Margo Davidson, the cousin of one of Kermit Gosnell’s adult victims, Semika Shaw. Semika was killed by Kermit Gosnell in 2000 in a botched abortion, and her cousin is haunted by the memory of what Semika suffered at the hands of the cruel abortionist. Her cousin also happens to be a State Representative in Pennsylvania, where Kermit Gosnell operated his House of Horrors.

When Davidson, a Democrat, first ran for office in 2010, she was endorsed by Planned Parenthood. But in late 2011, Davidson voted in favor of a bill designed specifically to prevent the kind of horrors that killed her cousin from being perpetuated in other Pennsylvania abortion mills. Davidson publicly acknowledged the tragedy that befell her cousin when the latter went to Kermit Gosnell for what Planned Parenthood would call “pro-woman” health care in an emotional, heartfelt address to the legislature:

Today I honor [Semika’s] memory by voting for this legislation that seeks to safeguard the health of women that is long overdue, so that never again will a woman walk into a licensed healthcare facility in the state of Pennsylvania and be butchered, as she was, with her uterus perforated and her death of sepsis and infection permeating in her body till she writhed in pain on the floor of her home to her ultimate death.  And today I thank the members of this house that supported this legislation for the safety of women.

Planned Parenthood, whose undeniable goal is to propagate abortion at any cost, no longer supports Davidson, and has not endorsed her in her campaign for re-election.

In its endorsement for Billy Smith, Davidson’s challenger in the upcoming election, Planned Parenthood made the following statement (emphasis added):

We are extremely disappointed by current 164th District Representative Margo Davidson’s votes on SB 732 and HB 818,” said Stevens. “We have faced unprecedented attacks here in Pennsylvania straight out of the Tea Party playbook, and Representative Davidson voted for two such attacks that are now law in Pennsylvania after being an endorsed candidate in 2010.” SB 732 became Act 122, forcing all surgical abortion providers to become Ambulatory Surgical Facilities (ASFs), limiting access to safe, legal abortion in Pennsylvania, and causing facilities to spend hundreds of thousands of dollars for no reason related to improving patient safety. HB 818 became Act 13, banning individuals from purchasing insurance coverage of abortion services with their own private dollars through the new Health Care Exchanges, even in a medical emergency.

Planned Parenthood might have benefited from doing its homework before demonizing the woman-focused provision of converting abortion facilities into Ambulatory Surgical Centers. Either they didn’t do their homework or they just don’t care about the lives of people like Karnamaya Mongar, who died of complications following a badly botched abortion by Kermit Gosnell. Her death would have been prevented if Gosnell’s facility had more qualities of an ASF, like wide hallways.

Due to the constraints of the facility, Mongar’s gurney could not be navigated by paramedics through Gosnell’s hallways, and the consequent delay in reaching the hospital may have been the difference between life and death for the victim. As a result, both Karnamaya Mongar and her unborn child died that day. That is, apparently, the “safe, legal abortion in Pennsylvania” that Planned Parenthood is looking to perpetuate.