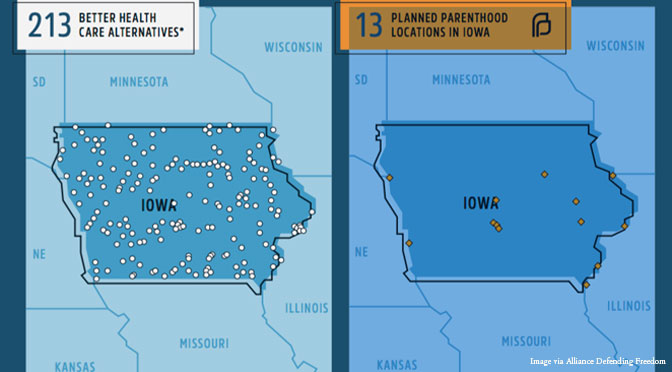 A new state provision being considered by Iowa Governor Terry Branstad would reroute state taxpayer funds for women’s health to agencies which do not provide abortion. The language of the provision, according to the Sioux City Journal, “would not name Planned Parenthood but the effect would be to defund any abortion-services provider.”

As recently as October 2015, Gov. Branstad had stated that, following an investigation of Planned Parenthood in the state, he couldn’t defund the abortion giant, despite campaign promises to the contrary. Live Action’s Calvin Freiburger noted:

… [T]he governor possesses the authority to cancel the state’s contract with Planned Parenthood and revoke its eligibility as a Medicaid provider, noting that in addition to PP’s thirteen locations in the state paling in comparison to 213 actual health centers and the organization’s abominable crimes, Iowa’s PP affiliate is currently under investigation for $28 million in alleged Medicaid fraud….

Alabama, New Hampshire, and Louisiana managed to terminate their states’ Medicaid contracts with Planned Parenthood. The latter state’s governor, GOP presidential candidate Bobby Jindal, has been particularly defiant in the face of pro-abortion hysteria, and even wrote to Branstad urging him to do the same.

But Branstad said he couldn’t do the same, due to the lawsuits that resulted from these states’ decisions to terminate their Medicaid contracts with the abortion giant. The Sioux City Journal quotes Branstad as saying, “A governor cannot unilaterally say we’re going to terminate this contract with Planned Parenthood. Every governor that has tried has lost in court so I’ve said I’m not going to do that.”

Branstad now appears to have chosen a different strategy, adding, “But I’m very willing to work with the Legislature and come up with a better way to fund programs to help needy women that need family planning or pregnancy prevention, but that can be done through groups that don’t provide abortions.”

While Planned Parenthood of the Heartland (which covers Iowa, Arkansas, Nebraska and Eastern Oklahoma) responded to the news by warning Branstad as to how essential their services are, the group’s annual reports from FY2014 to FY2015 show an overall decline of nearly 12,000 patients (nearly 20 percent) – as well as a 28 percent drop in contraceptive services and a 12 percent drop in STD/STI testing. Pap tests show a 24 percent drop, but perhaps most striking is a whopping 61 percent drop in breast exams from 2014 to 2015.

Women appear to be increasingly getting their health care at agencies other than Planned Parenthood.