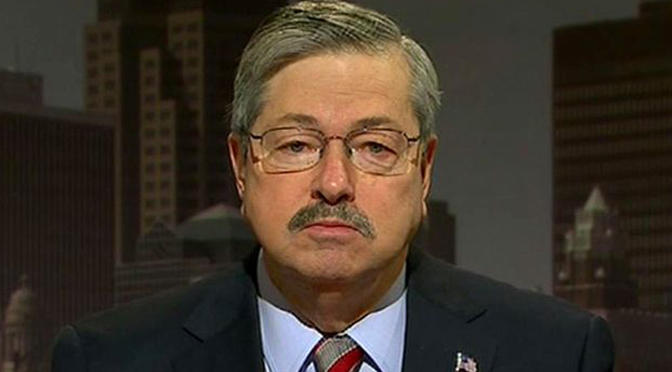 In July, Iowa Republican Governor Terry Branstad responded to the news of Planned Parenthood’s organ harvesting side business by ordering a comprehensive review of state women’s health and family planning funding to ensure none of it was helping Planned Parenthood perform abortions. Alas, now he says he can’t defund Planned Parenthood after all:

“It appears to me, and the advice that we have received from the attorney general’s office, is that we cannot defund Planned Parenthood,” Branstad said last week, according to The Des Moines Register. “The attorney general’s office has notified us that we don’t have reasons; [Planned Parenthood hasn’t] violated their responsibilities under the grants that they have received from the state.”

The Iowa social conservative group The Family Leader is not impressed, and has been doing a lot of work to refute Branstad’s claims and pressure him into doing the right thing.

They explain that the governor possesses the authority to cancel the state’s contract with Planned Parenthood and revoke its eligibility as a Medicaid provider, noting that in addition to PP’s thirteen locations in the state paling in comparison to 213 actual health centers and the organization’s abominable crimes, Iowa’s PP affiliate is currently under investigation for $28 million in alleged Medicaid fraud.

“How,” they ask, “is an open, pending case investigating Planned Parenthood for scamming state and federal taxpayers not sufficient legal ground to suspend their contracts and Medicaid provider eligibility?”

TFL also calls out Branstad for hiding behind the old saw that they’ve already “ensured that Planned Parenthood is never reimbursed for an abortion.” How can any serious pro-life leader not see the fungible assets dodge coming a mile away?

Alabama, New Hampshire, and Louisiana managed to terminate their states’ Medicaid contracts with Planned Parenthood. The latter state’s governor, GOP presidential candidate Bobby Jindal, has been particularly defiant in the face of pro-abortion hysteria, and even wrote to Branstad urging him to do the same:

Finally, at my direction, DHH [Louisiana Department of Health and Hospitals] notified Planned Parenthood Gulf Coast of the termination of their Medicaid contract with the state of Louisiana, for cause. I encourage you to watch these videos and to take similar action in your state as well. If you have any questions about the specific actions our state has taken to protect life, please do not hesitate to call me.

Branstad may be hiding behind the law as an excuse for his inaction, but as prominent Iowa commentator Shane Vander Hart reminds us, the governor is no legal purist—last month, he issued an executive order implementing much of a controversial bill to address school bullying that failed to clear the state legislature months before.

So in his view, a bureaucratic expansion that neither parents nor educators requested was so important to combat misbehavior that it justified running roughshod over separation of powers and the legislature’s prerogative, but an organization that exists for the express purpose of slaughtering children committing additional crimes doesn’t merit using the full extent of the authority the governor actually has.

If standing on principle is too scary, then perhaps Branstad shouldn’t have run for reelection partly on the promise to defund Planned Parenthood.

When the Center for Medical Progress videos first appeared, the raw evil they revealed was so overwhelming that a lot of politicians momentarily forgot to be politicians, instinctively reacting the way conscientious human beings normally would when not preoccupied with polls and consultants and donors and press coverage. So they made dramatic promises, but as time went on moral reality subsided in favor of their default political reality.

Some, like Governor Jindal, proved themselves to have really meant it; others, not so much. So now the people of Iowa and the pro-life movement have to confront Terry Branstad with a question: in which group does he want to be remembered?