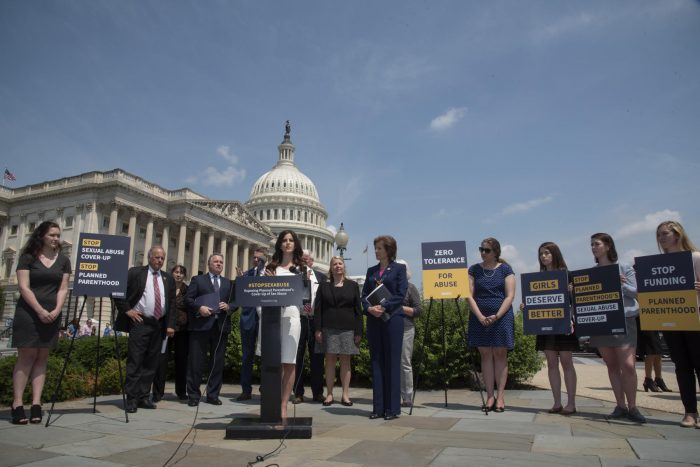 “As the head of Live Action and the founder of Live Action, we work to expose the injustices and abuses that many women and girls experience at the hands of the abortion industry,” said Rose. “[…] This report, which spans over 10 years of research, was really begun when I first went undercover when I was a college student ten years ago posing as an abuse victim. […] Planned Parenthood, instead of reporting abuse, instead of being that person who can encounter a girl in an extreme state of distress and be that moment of intervention for her, does a secret abortion, has a ‘don’t ask don’t tell’ policy […] and sends this vulnerable young girl back into the arms of sex abusers. […] Now this report is a culmination of over ten years of research exposing the systemic abuse cover-up at Planned Parenthood.”

Fifty-six members of Congress have signed a letter asking HHS secretary Alex Azar to open an investigation into Planned Parenthood’s cover-up of sexual abuse and trafficking.

Congresswoman Diane Black (R-TN), author of the Defund Planned Parenthood Act of 2015 and member of the House’s Select Investigative Panel on Infant Lives, said that the “integrity of our tax dollars should never be in question, especially those intended for actual family planning and women’s health care.”

“Let me be clear: abortion is not family planning,” she said. “It is family destruction. […] Under these new rules, we have an opportunity to equip women with resources that value and protect their unborn children.”

Former Congresswoman Marilyn Musgrave, Vice President of Government Affairs for the Susan B. Anthony List, told the press that it is “outrageous to think about Planned Parenthood receiving tax dollars” since even people who call themselves “pro-choice don’t think organizations like Planned Parenthood should receive taxpayer dollars”. She called on Health and Human Services to investigate Planned Parenthood and other abortion providers.

Laura Lederer, legal scholar and former Senior Advisor on Trafficking in Persons in the Office for Democracy and Global Affairs of the United States Department of State, co-authored the report that found that Planned Parenthood is a top destination for trafficking victims, second only to the emergency room.

Lederer noted that her report found that 71.2 percent of sex trafficking victims became pregnant during their time as sex slaves. 21.2 percent became pregnant five times or more. 29.9 percent had multiple abortions, and those abortions were forced by the trafficker through violence and threats. 67 percent of these abortions were performed at an abortion facility. One victim stated that she had 17 abortions during her time as a sex slave, and each of them took place at the same facility.

“This is endemic right now in our country,” said Lederer. She noted that one survivor she spoke with went to a pregnancy resource center, which helped save her and her preborn child from sex slavery and abortion. Pregnancy resource centers across the country are now training their staff and volunteers to recognize the signs of sexual abuse victims.

“Abortion and trafficking should transcend all political boundaries of the abortion debate,” said Lederer. “In the context of slavery or slavery-like situations, it violates both the pro-life belief that abortion takes an innocent life and the pro-choice idea of a woman’s freedom. […] We need to put an end immediately to this terrible practice.”