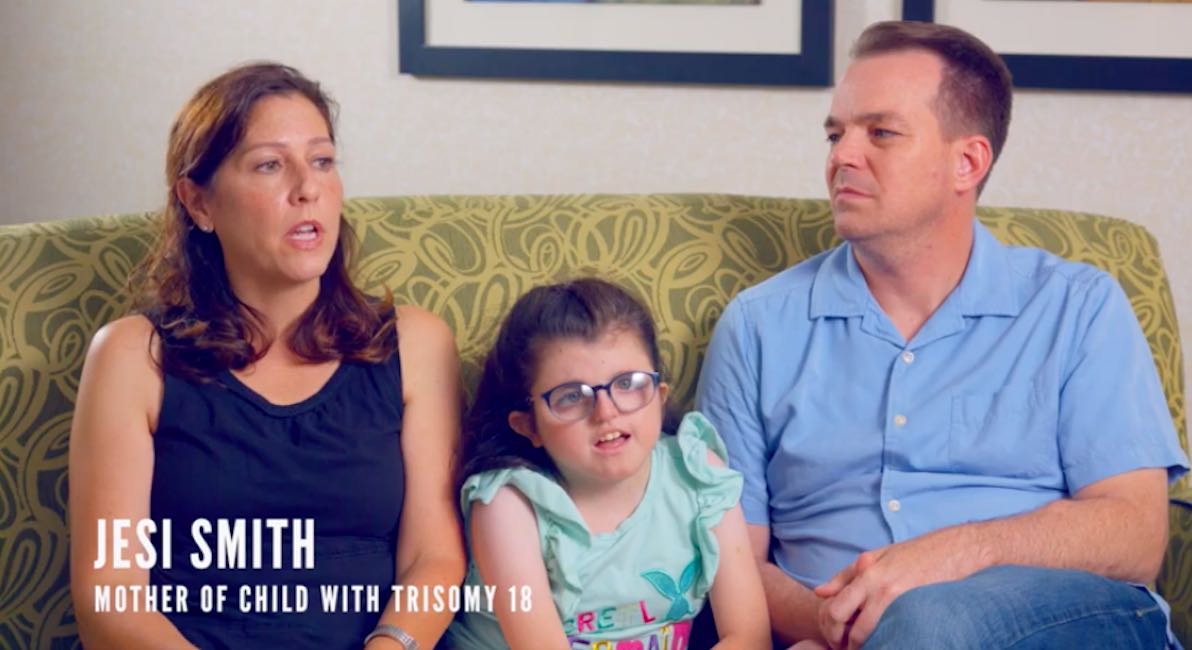 Pro-Life Champions, the non-profit behind The 40 film as well as founders of the Shout My Story video campaign, recently released “Incompatible with Life,” a documentary about the “surprisingly common phenomenon of doctors who recommend abortion to parents who have a diagnosis of fetal abnormality.”

The film features snippets of testimony from over a dozen families who received distressing prenatal diagnoses, and then goes in-depth with three of the families. Cindy Morales, executive director of Pro-Life Champions, told Live Action News that the documentary was a natural outgrowth of Shout My Story. “We started out just wanting to tell stories (through brief videos) of women who chose life in difficult circumstances,” Morales said, but the documentary format allowed them to specifically explore the particular realities experienced by families who receive a poor prenatal diagnosis. “Even people who are pro-life will often say ‘except in cases of incest, rape, or fetal anomaly,'” she said.

While most people are aware that “pregnancy termination” is routinely recommended to moms of children with life-limiting diagnoses like anencephaly, Morales noted that “abortion is often recommended anytime there is a so-called ‘problem’ with the child.” According to the documentary, roughly two-thirds of children diagnosed in utero with Down syndrome in the United States are aborted.

Nancy and Chad Binger received a Down syndrome diagnosis for their son Cody at 22 weeks gestation. In the film, Nancy recalled her obstetrician telling her, “‘I’m sorry, I can’t believe I have to tell you this.’ She made it sound so sad and that things were going to be awful. So I, obviously, had a… terrified look on my face, and so immediately she said, ‘Well, you have the option to terminate the pregnancy.’ At no point was I given options of resources or families that had children with Down syndrome. I was never given any hope. I was never given any encouragement. It was all negative. It just seemed like a life that would be altering in a negative way.” Cody is now an active toddler, doted on by his two older siblings.

Dr. John Carey, Vice Chair of the Department of Pediatrics at the University of Utah, offered some disturbing context for the “gloom and doom” approach some health care professionals take toward children with life-altering or life-limiting diagnoses. He said in the film, “I’ve been in conversations with obstetricians where this is the crux of the conversation- ‘Look what this child’s going to do to that family. They’re going to tear this family apart.’ They feel like they’re doing the family a service [by recommending abortion].”

“I had never been approached like that… never encouraged to abort.”

Jesi Smith and her husband Brad first learned during a prenatal ultrasound that their fifth child, Faith, had “soft signs” for a chromosomal abnormality. They were shocked at the way they were treated once the medical team suspected that Faith had Trisomy 18, a genetic condition that can be lethal but is increasingly treatable with early intervention and the help of a small but growing number of Trisomy 18 specialists.

The Smiths were told that Faith had “a fatal anomaly” that was “incompatible with life” and were pressured to abort. Jesi recalled that this was her fifth child, and she “had never been approached like that, never talked to like that, never encouraged to abort. But, with disability, we were.” Brad added, “As a parent, you feel trapped. You feel overwhelmed… you don’t think you can do anything else.” The Smiths rejected abortion, and Faith is now 12 years old.

Morales told Live Action News that, tragically, 90% of children with Trisomy 18 are aborted.

Morales told Live Action News that Pro-Life Champions created the documentary out of a desire “to give parents in those situations hope.” Each of the families in the film offered hope to others receiving similar diagnoses.

Molly and John Kurt learned around 20 weeks gestation that their daughter Mary Grace had anencephaly, a serious birth defect that leads to many stillbirths, and a short lifespan for those children who are born alive. Despite significant pressure to abort, the Kurts chose instead “to love our child as we would do with any child, just the same.” Molly remembered that, while tinged with sadness, “when [Mary Grace] was born… it was a celebration in many ways. We made arrangements for our family members to be there with us, and we introduced her to them, because she was a part of this big happy family that we had. We wanted people to know her and to love her, and to feel the love that she gave them and to remember her as a person that had a place in our family.” The Kurts had 30 hours with Mary Grace after her birth, an experience that they would have been deprived of if they had chosen abortion.

Two of the moms — Nancy Binger, mom of Cody, and Jesi Smith, mom to Faith — spoke similarly in the film about the good that can come from difficult diagnoses. Binger commented, “I would just want parents, and moms, to know that they don’t have to be afraid and it is a wonderful, amazing journey. It is a gift that’s unexpected, but it is a gift to be a mom of a child with Down syndrome.”

Smith added, “It’s not a tragedy, because every child has special needs and every child is a gift… There’s something beautiful about every person, and [Faith] has taught us to find [that beauty].”

Morales told Live Action News that a study guide to accompany the film is in the works. “It will connect abortion and euthanasia, because the same reasons for killing off sick children are given for killing off the vulnerable elderly.”