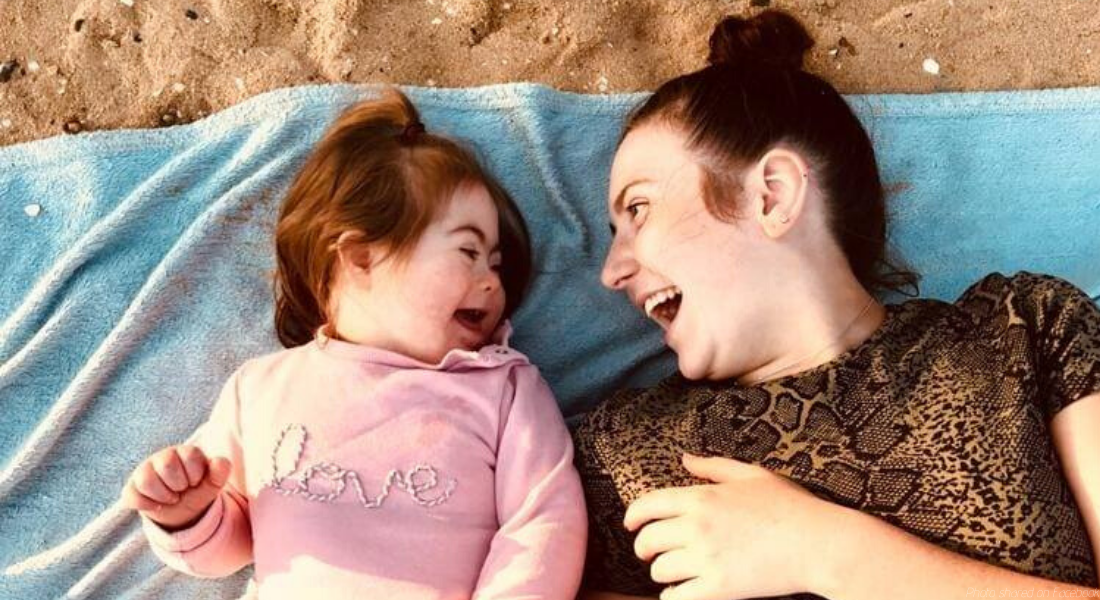 Corina Gander already had four daughters, ranging from 16 to 4, when she and her husband found out they were expecting their fifth baby. Initially, it was a “happy surprise” for the couple, but when they learned daughter had Down syndrome, Gander faced an uphill battle with very little support — but chose life anyway.

At her 12-week ultrasound, Gander told the Daily Mail she was full of excitement. Then, a nurse called her to say her baby had a one in five chance of having Down syndrome. “I’m not sure how she thought I’d react,” Gander said, explaining that the nurse asked her what she wanted to do. “I knew what she meant. Did I want to abort? My mind fast-forwarded to when I was old and unable to care for a child with a disability.”

Gander chose to have diagnostic testing done, and went for the test by herself. As she saw her daughter on the ultrasound, her doubts began to ease. “As I looked at the grainy image on the screen, emotion swept over me. There was my baby doing somersaults in my belly,” she said. “In that moment I knew the result would be irrelevant.”

READ: Mom pressured to stop treating son with Down syndrome: ‘Make arrangements for his death’

Resolved to keep her daughter no matter what, Gander received a call a few days later confirming the Down syndrome diagnosis. The nurse who notified her told Gander she was “so sorry.” Gander, however, said she was fine. She began letting people know — her husband, her family, and her friends — that her new baby would come with an extra chromosome. And her support quickly crumbled around her.

Not only did Gander’s husband leave her, but her friends and family also pushed her to have an abortion.

“‘You have four normal children, why have this one?’ and ‘I seriously doubt your ability to cope with a disabled child,'” she recalled people saying. But she refused to let it phase her. “The love I had for the little girl I was yet to meet was so strong. They made me want to have her more and prove to the world she deserved her place as much as anyone.”

Despite the lack of support from others, Gander’s four older daughters were thrilled, and her little girl — named Daisy — was born at 37 weeks. While Daisy was initially able to come home, she became gravely ill later, sick with bronchitis and chronic lung disease. “All the time I kept thinking I’m going to lose her, as I split my time between the hospital and trying to keep things normal at home for the girls,” Gander said. “I don’t know what I’d have done without Mum and Rhianna. The girls’ dad helped out too.”

As Daisy struggled, Gander said doctors dismissed her concerns because she has a disability. “I would ask people, medical professionals, ‘is this right?’” Gander recalled to the Hertfordshire News. “And they would say ‘yes this is normal, because she has Down’s syndrome.’ Any child with special needs gets dismissed because they have a condition. For those first few weeks of Daisy’s life it was ‘this is her normal, this is normal for her.’”

But things only got worse. Daisy, it turned out, also had epilepsy, and was having seizures, in addition to struggling to breathe on her own. Yet Daisy still smiled at her mother, grabbing her fingers and responding to her voice.

Then, doctors told Gander the medication to treat Daisy’s epilepsy would mean it was “unlikely she’ll ever feel emotions, smile or feel pain.” And they were right. “When I spoke to her she gave me nothing. In a room on her own she just lay there, day after day,” she said. “My heart breaking, I felt like I’d lost her. I couldn’t let her go on like this.” So Gander took her home — but instead of getting worse, Daisy got better, with Gander crediting her other daughters.

“Slowly but surely over the coming weeks she came back through being with her sisters,” she said. “They literally brought her back to life, as they played with her, cuddled her. It was a miracle.”

Inspired by her daughter, Gander launched Daisy’s 21 Wishes, to help new parents like her who receive a Down syndrome diagnosis. “Daisy’s first wish is that support will be offered to new parents receiving a pregnancy diagnosis of Down’s syndrome,” Gander explained. “I have done this by doing a pack that will be handed out by screening nurses in antenatal departments. This includes a personal letter written by me telling the story of my journey. For the parents that give birth to a child that has Down’s syndrome but weren’t aware, myself and my friends are writing a book individually telling our stories hoping to give positivity and hope.”

Today, Daisy doesn’t need to be on oxygen and can talk, surpassing the expectations placed on her by her doctors. “She loves playing school with her sisters and every day she astounds us all,” Gander said. “Her smile would certainly melt the hardest of hearts.”