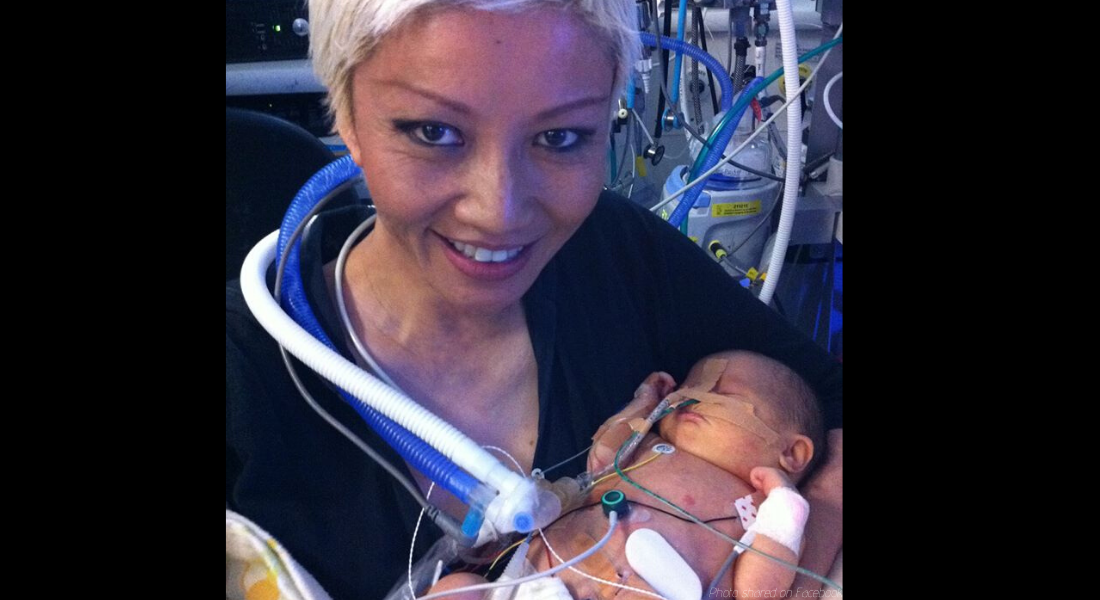 A mom who faced pressure from doctors to have an abortion due to a prenatal diagnosis of Down syndrome is speaking out about the horrific treatment she and her son faced — as well as the discrimination they still have to endure.

In an article written for The Mighty, Jackie Tang explained how from the very beginning, doctors pushed abortion on her. Tang had recently separated from her husband when she realized she was pregnant, and during her 20-week ultrasound, doctors told her they suspected her son had Down syndrome. They also discovered a heart defect, and a blockage in his bowels, both of which were what led doctors towards the potential diagnosis. “I thought, ‘OK, I’m happy to work with that,”’ Tang said in an interview with Kidspot. “Your life doesn’t have to suffer because you’ve got a special needs kid.”

Yet doctors continually urged her to have an amniocentesis so she could “terminate” before it was “too late.” Eventually, she decided to get the test done, so she could better prepare for her son’s arrival and the care he would need. But then they also detected fluid in his lungs. “I was told my baby was dying and would not survive to term,” she wrote for The Mighty. “I was given three options: to let him die in the womb and deliver him stillborn, to have him delivered immediately with no likelihood of survival, or to prolong the pregnancy as much as possible by presenting at the hospital three times a week (from memory) for a few hours each visit, for steroid injections and monitoring of the baby’s heartbeat. I chose the third option.”

Noah was born in May of 2012 at just 34 weeks gestation, with duodenal atresia, and AVSD, and hydrops fetalis. Yet doctors wanted to take little-to-no action to save him. “He spent his first seven months in hospital having a series of life-saving surgeries. I was called three times in the middle of the night to prepare for his death,” she told Kidspot. “I had a lot of pressure from doctors to terminate Noah’s treatment. One doctor told me Noah would be a drain on public resources, that he’d be a vegetable and my life would never be the same.”

The hydrops fetalis, a condition in which large amounts of fluid build up in a baby’s organs, was one of the most serious issues Noah faced, yet Tang had to battle doctors to try to treat him, especially once he reached a month old. “Doctor 3 asked for a meeting, from her tone she sounded like she thought I was suffering from delusion,” she recalled. “She said, ‘I don’t know if you don’t understand this but hydrops plus Down’s is just not survivable. You need to make arrangements for his death.'”

Doctors also tried to give her guilt trips for giving Noah treatment, to again persuade her to let him die. “Doctor 2 called for a meeting,” she wrote. “She said that they were running out of places from which to draw blood from Noah (which they had to do more than once a day for testing) and she asked how I felt to hear him scream as they pinned him down to do so (sometimes with my help) when he only had about two cups of blood in him (a fact that a different doctor in NICU later disputed). Could I bear to see him suffering?”

Tang was told Noah would never be a productive member of society, that she would have to give up everything to care for him, and that he would be a burden on the government. Yet still, she persisted, even as they told her Noah could no longer stay in the NICU.

Eventually, Noah had his AVSD repair surgery, recovered from the hydrops fetalis, and went home a week before Christmas. He’s now five years old and thriving, attending preschool and daycare. Yet she still faces discrimination, like when she brings Noah to work with her. Tang, who runs a Malaysian restaurant and operates food stalls at area markets, said she’s received complaints about having Noah at work with her. “I don’t think people are being deliberately malicious,” she told Kidspot. “They see Noah, he looks different and they think he might need extra help. They think they’re doing the right thing by him, but it’s discrimination. I employ an extra staff member just so that one of us can always attend to Noah when he needs.”

She continued, “How can someone come to me and say they know more about his needs than I do? I’ve been fighting for his rights since day one.”

READ: Woman gives birth to daughter conceived in rape: ‘She is such a joy’

These kinds of negative experiences are far from uncommon; according to one study, only 11 percent of women said their diagnosis experience was positive. 13 percent of doctors admitted to pressuring mothers to have an abortion.

Prenatal testing is a positive thing in and of itself that can help parents make the best medical decisions for their children with disabilities. The problem lies in the medical industry, which time and again shows they have no respect for the right to life of anyone who might be just a little bit different.