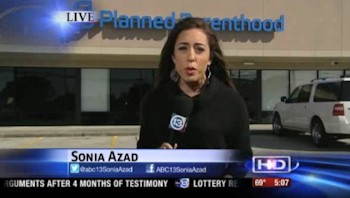 Since its opening last month in Spring, Texas (a suburb of Houston), a new Planned Parenthood facility finds itself in unwelcome territory. The location replaces a now-closed Planned Parenthood referral center that opened in the early ’90s, just a few miles from the new location at a busy intersection in the same suburb. However, residents are not pleased with the new addition to their neighborhood and are peacefully protesting the presence of Planned Parenthood at least four times a week. The fervor and number of these concerned citizens has captured the attention of local media, including Houston’s ABC affiliate, KTRK:

According to an e-mail from Planned Parenthood Gulf Coast, five people stopped in at the facility to thank Planned Parenthood for being there on opening day. However, according to the Houston Coalition for Life, nearly one hundred peaceful protesters turned out on the facility’s grand opening on Monday, April 22. The Planned Parenthood e-mail failed to mention anything about them. Planned Parenthood demonstrated its disregard for the family atmosphere of the area by choosing a very busy grocery store parking lot adjacent to many small, family-oriented businesses as its new location. Before its closing, the former location that this Planned Parenthood facility is replacing was in a much more inconspicuous location among several offices and a small restaurant.

Continued peaceful protest and prayer make a difference, and you can offer your prayers and your voice by participating in prayer on Thursdays with the Houston Coalition for Life at 12 p.m., or for a Rosary on Mondays at 10:30 a.m. and Saturdays at 9:30 a.m. with Christ the Good Shepherd church.