Planned Parenthood – perhaps now accustomed to Texas’ fierce efforts against their bloody business – crept under the public radar and made arrangements to open up shop in a new location in the Greater Houston area. On Monday, April 22, the organization is slated to open up a new office that will give abortion referrals and provide birth control pills and emergency contraception (aka the “morning after pill”) to Houston-area women. 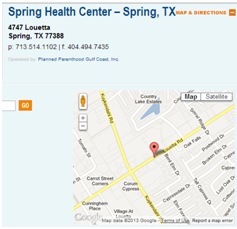 The morning after pill and abortion referrals

Although the office will not perform surgical abortions, pro-lifers need to be aware of the danger of any Planned Parenthood facility, even if it is a referral center. First of all, the office will provide the morning-after pill. The morning-after pill, which has documented, serious side-effects for women, can cause abortifacient effects if it is taken after fertilization has occurred but before implantation has taken place. According to a study published by the BBC:

The possibility that it may produce an abortion arises from the morning-after pill’s second method of operation.

Many pro-life groups object to the morning-after pill as a form of abortion because it can operate after the egg has been fertilised. Those who disagree with this argue that the pregnancy does not begin with fertilisation, but with implantation, and say that if implantation is prevented there was never any pregnancy to abort.

There is no way for a woman or her physician to know that fertilization has occurred within the few days after intercourse, so taking the morning-after pill is always a game of Russian roulette, potentially risking the life of a pre-born child. Although the American Congress of Obstetrics and Gynecology (ACOG) has chosen not to recognize pregnancy as having begun until after the zygote has traveled up the Fallopian tubes and implanted in a woman’s uterus, the abortifacient effects of the morning-after pill are very real. Science has shown that from the moment of fertilization, the new life of a separate individual with unique DNA has begun, and consequently the morning-after pill can potentially cause that life to be lost.

The new office in Spring will also proffer abortion referrals, allowing a woman to go straight from the Spring Planned Parenthood referral office to a Planned Parenthood abortion center (probably this one, which is the largest abortion mill in the Western hemisphere).

Texans have proven time and again that we are not in favor off Planned Parenthood’s ominous presence in our state, and this referral office is no exception. We have stripped the organization of much of its state tax funding and installed strict rules and regulations for abortion practices in Texas, including the mandated offering of the Woman’s Right to Know booklet to potential abortion clinics. At this up-and-coming Planned Parenthood office in Spring, organized prayer and peaceful protest will likely be carried out by disconcerted locals, who are often led by the dedicated team at the Houston Coalition for Life. Christine Melchor, the Houston Coalition’s director, released the following information this afternoon:

Spring satellite facility: We will be there this coming Monday April 22nd, the first day they are open, from 1PM to 2PM. Gather in the grassy area between the parking lot and street and do not park in the strip center.

We can still contact the leasing agent for the Spring property and voice our concern and disappointment, so please contact them as soon as you can!