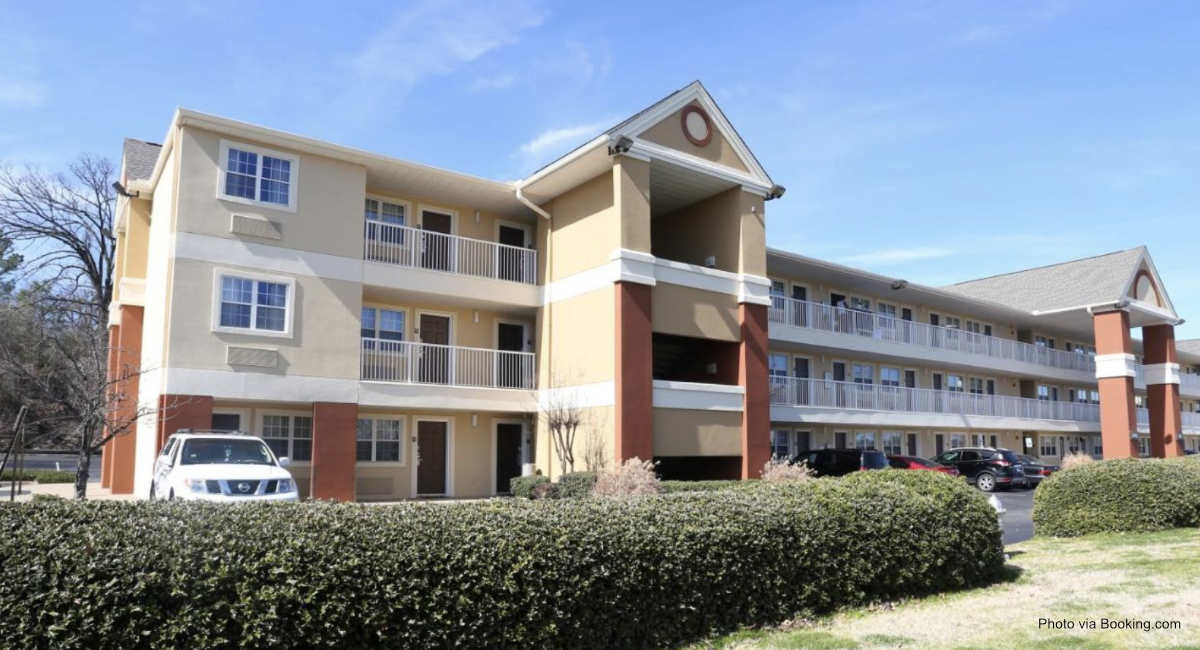 A late-term abortion procedure committed on a nearly 23-week-old preborn baby ended with abortionist Shelley Sella delivering the infant inside a hotel room shortly after the procedure began, then transporting the baby in a “bag” back to the abortion facility. Sella previously worked for the late George Tiller in Kansas, who also had arrangements with local hotel operators to house his abortion clients.

The horrific details were unearthed in a court deposition in the rape case of Eric Jerome Lacy,  and were made public by Jamie Jeffries, owner of the blog ProLifeWife. Sella admitted in her deposition to committing “tens of thousands” of abortions, worked for notorious late-term abortionist Curtis Boyd at Southwestern Women’s Options (SWO) in Albuquerque, New Mexico, where the victim was taken, according to the deposition passed on to Live Action News by Jeffries.

According to the deposition, sometime during the evening, Sella said the facility received a call informing them that their client was in active labor at the hotel.

“Either her mother, or another person who was with her, called our on-call person; we have someone on call 24 hours a day, a phone counselor, and said that she was in labor. I was, then, called and I went to see her at the hotel…. She was in active labor. She was in the bathroom, sitting on the toilet…. So, what I did was I cut the cord, and I placed it in a bag,” Sella stated.

Sella confirmed that she brought the “bag” with her. Nothing in the deposition indicated whether the baby was delivered dead or alive.

Sella testified that she later placed the “products of conception” in a bag in the refrigerator at the abortion facility after labeling that bag with the patient’s initials, date, and gender of the child. Read the full account at Live Action News here.

Advised to deliver in hotel toilet

In 2013, Live Action released undercover video as part of the InHuman investigative series which exposed abortionists at Southwestern Women’s Options in Albuquerque. In this investigation, SWO revealed its disturbing practice of leaving women alone in hotel rooms to deliver their dead children.

SWO abortion doctor Carmen Landau echoed this advice, telling the Live Action investigator to “sit on the toilet” and “unlock the hotel room.”

“Just sit there,” Landau says, “and you would not move until we come and get you.”

The Southwestern Women’s Options abortion facility told another investigator that they “work in conjunction with” the Plaza Hotel in Albuquerque, which gives abortion clients a special rate, will pick clients up at the airport, and drive clients to their abortion appointments at no additional charge. And the hotel advised the investigator about how to handle things should she happen to go into labor during the night.

Dr. Warren Hern, who commits abortions into the third trimester, informs clients on his Boulder Abortion Clinic website that “Boulder has… first class hotels a few blocks from Dr. Hern’s office,” and the facility can “arrange for accommodations that suit your budget and taste.” Hern links to a list of hotels but notes that the Boulder University Inn offers a “Dr. Hern patient discount,” if clients will  “[s]imply mention that you are in town to see Dr. Hern and the front desk will apply the rate to some/all of your nights.” 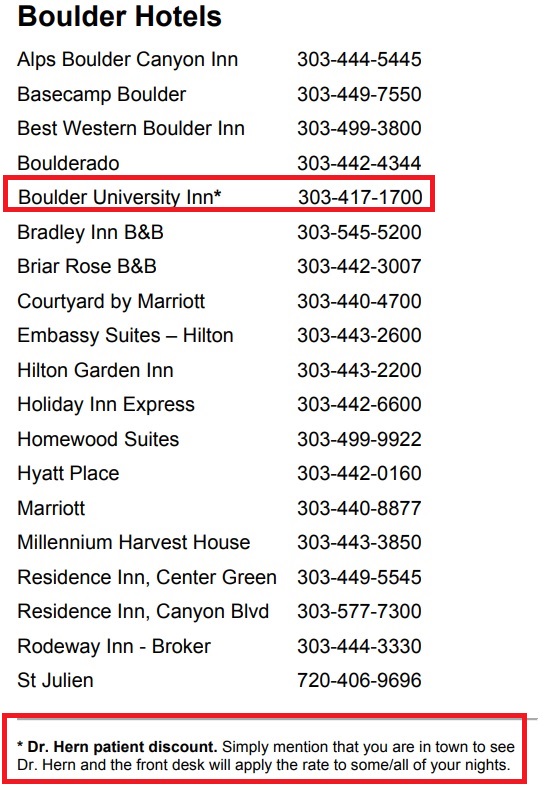 Little Rock Family Planning tells clients on its website that “some patients will need to stay in a nearby hotel, especially if they are between 18 and 21 weeks LMP.” The facility states abortion clients can “[s]how front desk this page and ask for HOSPITAL RATE” at the Extended Stay America hotel in Little Rock.

Abortionist Michael Benjamin, who once failed to report the horrific sexual abuse of a 12-year-old child, operates a late-term abortion facility in South Florida, where he commits abortions up to 24 weeks. Yet, he advertises for women to travel from Mississippi to Florida for terminations, where he states on his website, “We will help book you into a friendly and private hotel nearby,” for out-of-state clients. 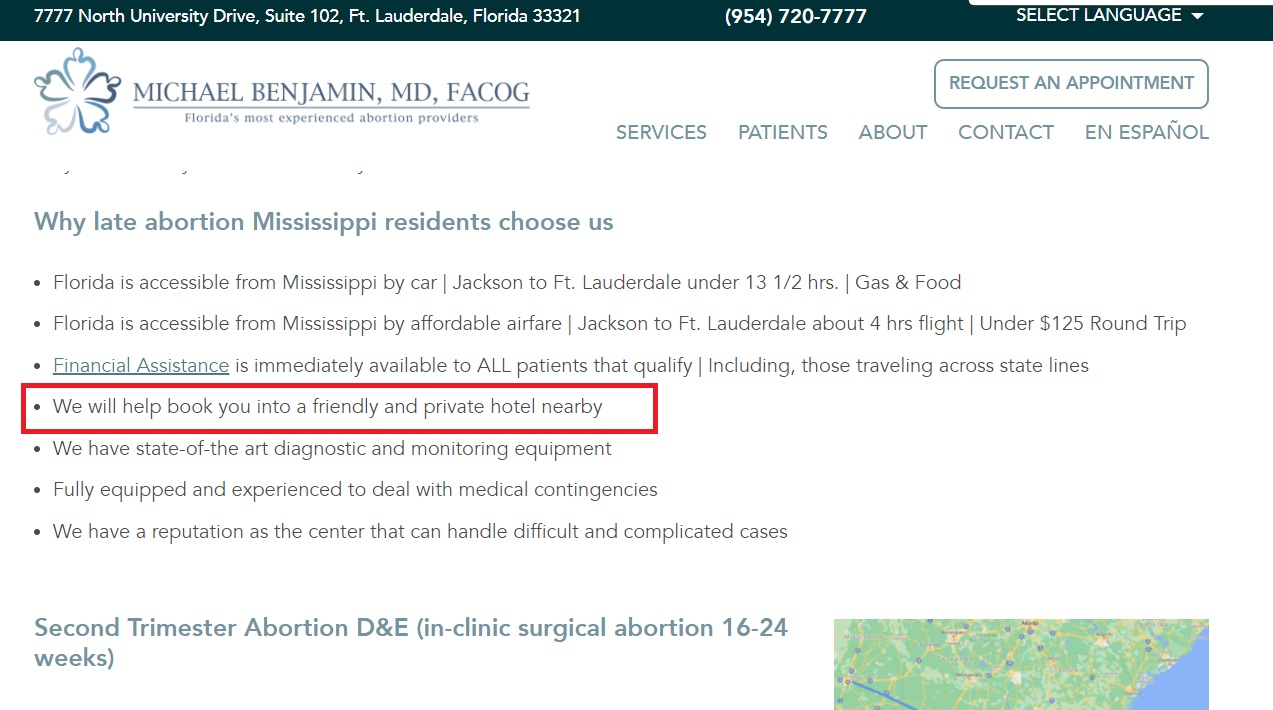 A Woman’s Choice abortion chain’s facility in Jacksonville, Florida, commits abortions up to  20 weeks and offers “Preferred rates” on their website if clients book at Howard Johnson and/or the Radisson Hotel in Jacksonville. And in Raleigh, North Carolina, the abortion website instructs clients to “[m]ention A Woman’s Choice of Raleigh” to get a special rate at the Cambria hotel and Suites Raleigh-Durham Airport. 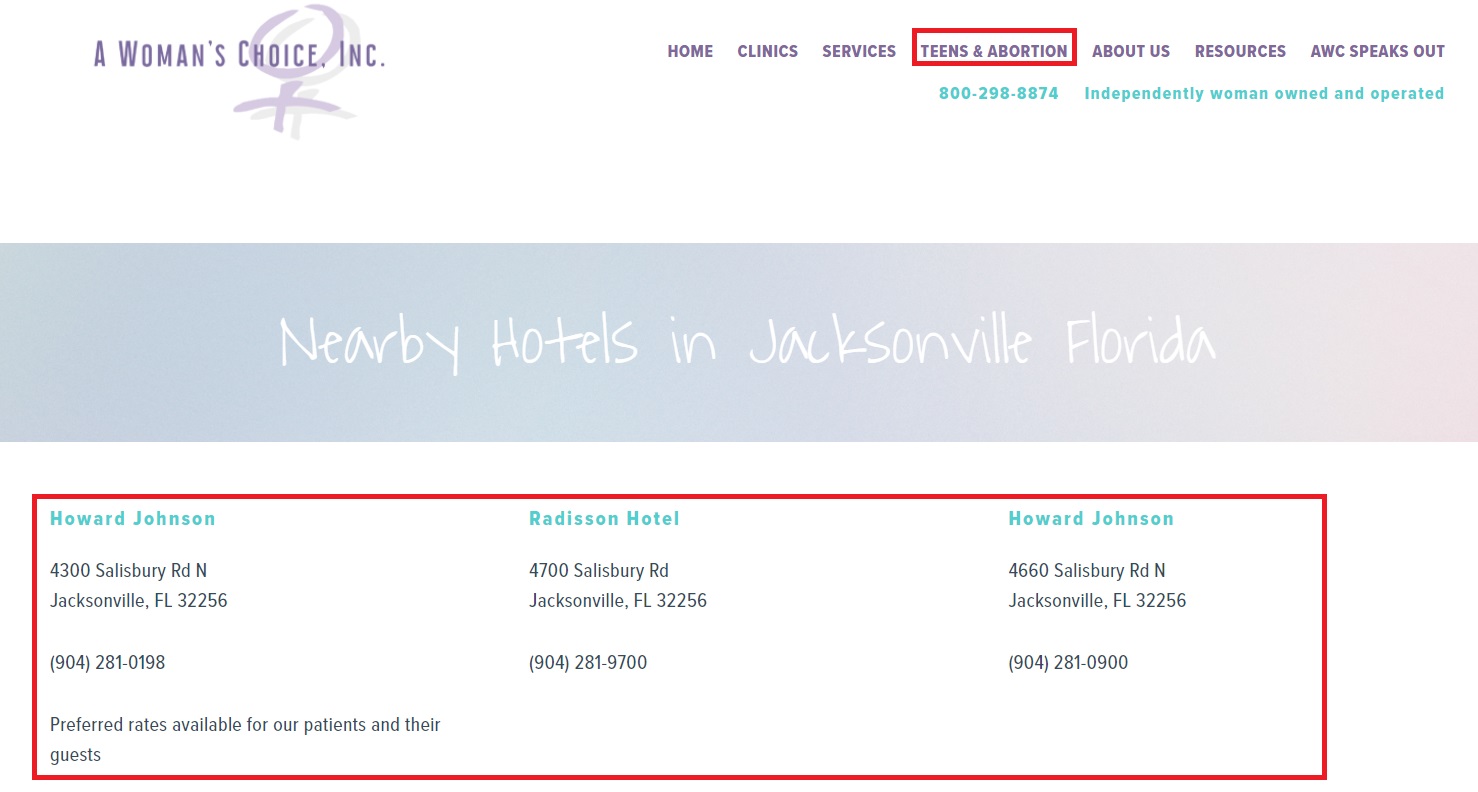 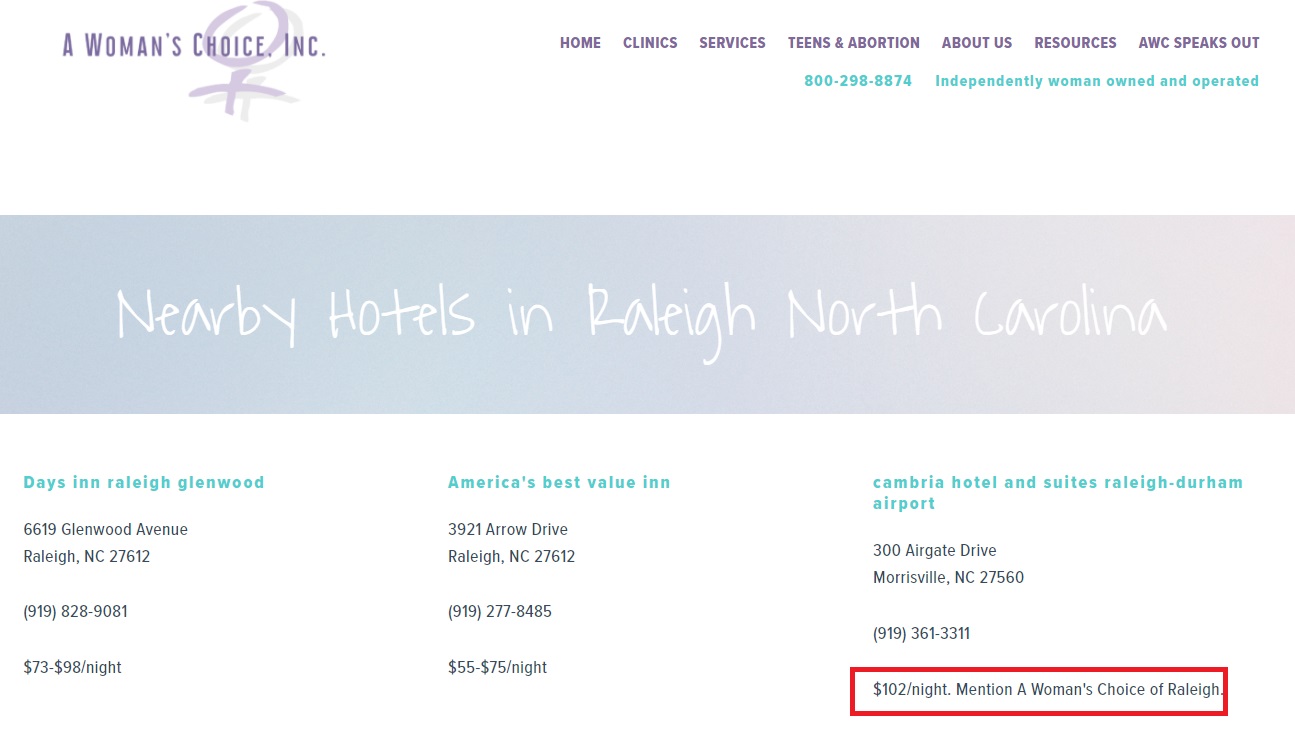 An inspection conducted by the District of Columbia (DC) Department of Health on the Washington Surgi-Clinic late-term abortion facility reveals that the facility may be walking abortion clients to local hotels after their procedures. Washington Surgi-Clinic and its owner abortionist Cesare Santangelo have been the focus of the potentially illegal deaths of five nearly full-term babies obtained by pro-life activists outside the abortion facility.

A Google review published by an alleged abortion client claims the facility sent a Hispanic staffer to her hotel, which was “right next door” after she began to bleed on day one of the three day procedure. She later delivered the baby, according to the review but questioned whether the baby boy “was born alive at 27 weeks.” She also wrote, “When I asked questions no one told me anything other than ‘that wasn’t suppose[d] to happen.’” 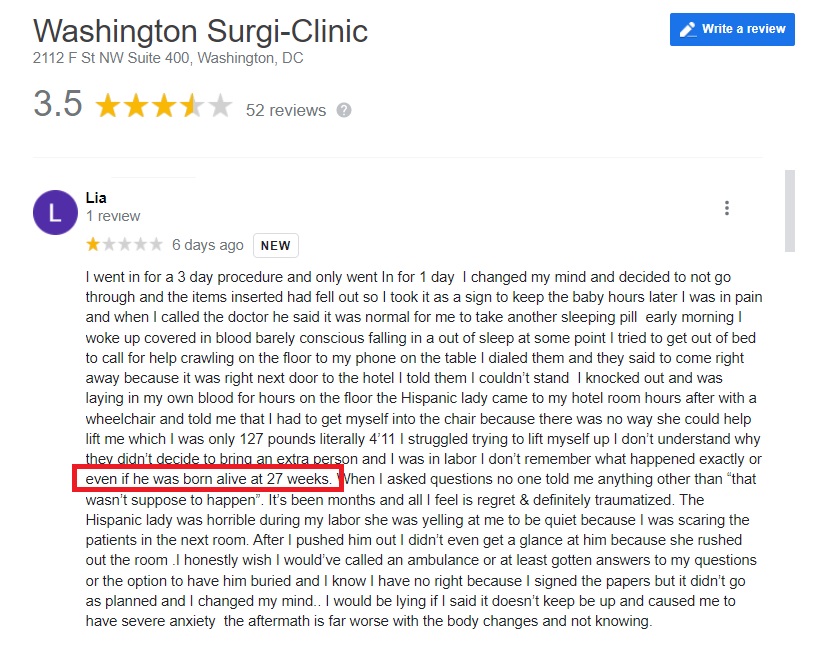 A May 2021 health department inspection cites the facility’s manual, which instructs staffers to be certain that clients who undergo sedation are accompanied by a responsible adult when leaving the premises. The “preoperative procedure, second tri” states “All prospective patients expected to be seen for more than one day much have lodging arrangements made  within five miles of the Washington Surgi-Clinic, and must acquire transportation to and from her office visits for all the days expected to be seen, as well as to be accompanied by someone to ensure the safety of the prospective patient…”

Records the inspector reviewed indicated that one client, who came to the facility from out of town, and was administered intravenous sedation during a procedure for intrauterine pregnancy “lacked evidence that the clinic’s staff followed their policy for discharging patients who receive sedation.” In response, the clinic claimed that “the patient was staying next door at the State Plaza Hotel, that is why patient wrote ‘herself’.” In a face to face meeting with the clinic, Administrator Maria Barrera added that “The patient stayed at the location on the same block as the center, and facility staff accompanied her back to the hotel after the procedure.” 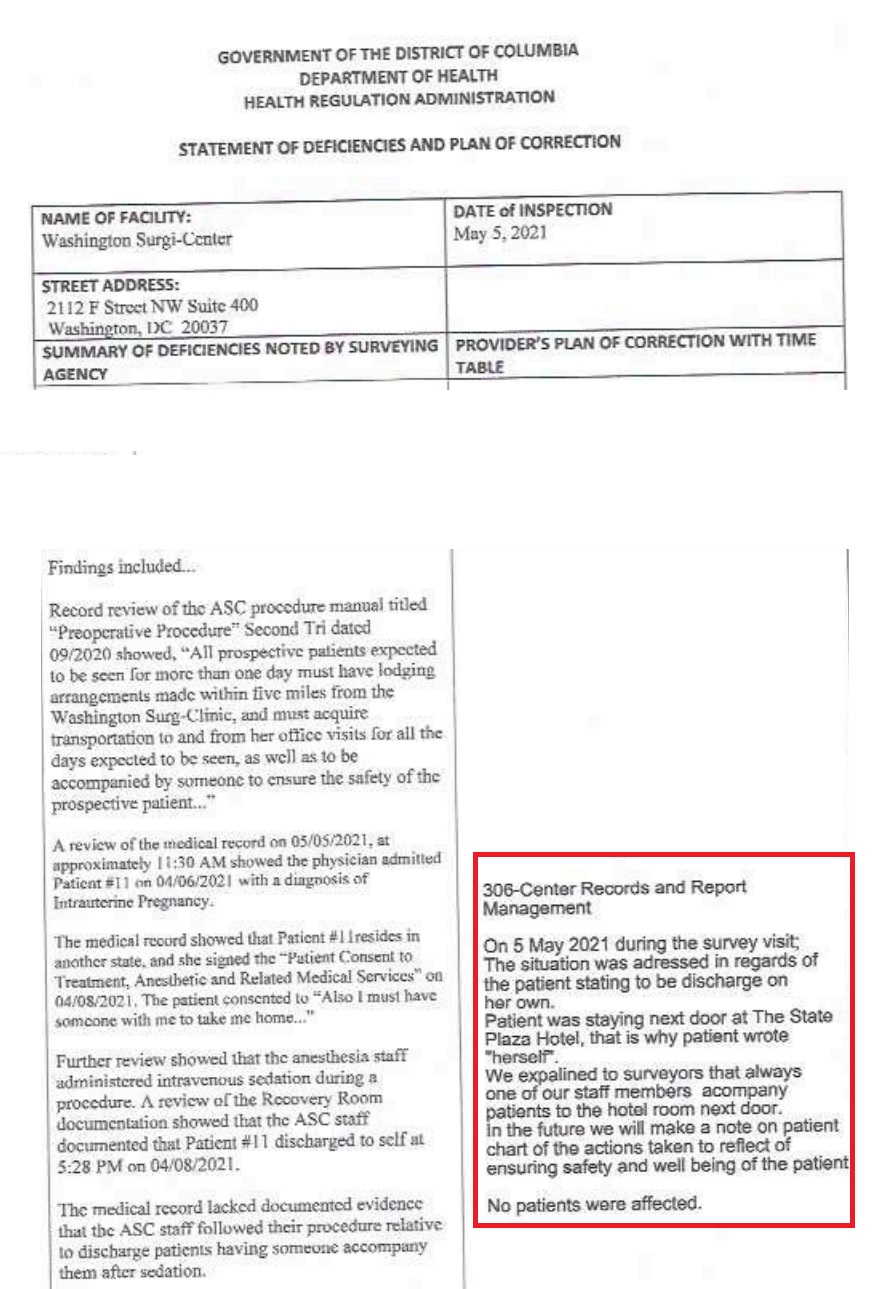 Another D.C. abortion facility, Capitol Women’s Group, which commits abortions up to 36 weeks of pregnancy, claims online that it is “less than one mile from the nearest hotel and would be happy to assist you in finding other overnight accommodations should they be necessary.”