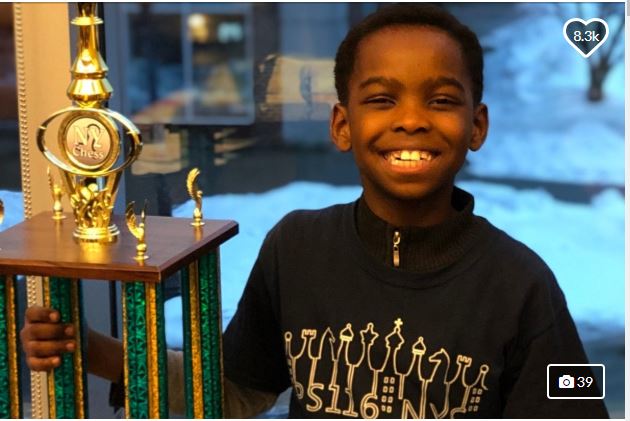 An eight-year-old boy who is currently homeless and living in a shelter has won the New York State chess championship for his age bracket. Tanitoluwa Adewumi is a Nigerian refugee who left Nigeria with his family in 2017 due to the attacks on Christians. His life has been anything but easy, and he has had to face difficult times as a young child. After leaving Nigeria, his family eventually made it to New York City last year, where they have been living in a homeless shelter. Adewumi learned to play chess at school.

“I want to be the youngest grandmaster,” he told the New York Times.

Russell Makofsky, who runs Manhattan’s P.S. 116 chess program, told USA Today that it is “unheard of for any kid, let alone one in a homeless shelter” to accomplish placing first in the New York State Scholastic Championships tournament for children in kindergarten through third grade. Overall, he has won seven chess trophies and is one of the top chess players in the country for his age group.

“He works very hard at his game,” said the school chess coach Shawn Martinez, adding that he could reach his goal of master “in the next year or two.”

A classic pro-abortion argument is that abortion is necessary so that children don’t face hardships in life, including not being financially stable. Pro-abortion activists and celebrities, like Jameela Jamil, have chimed in that not being ‘financially ready’ for a child is reason enough to end his life. Alyssa Milano recently told CNN that everyone is pro-life, but there are some life circumstances that are more important than human life, including economic issues. But a person’s worth is not dependent on how much money is in his parents’ bank account, or where he lays his head at night.

READ: I was raped while homeless, but my daughter is a gift

When Martinez saw that Adewumi was doing so well with chess in just a short amount of time, he invited him to join the school’s program. But the family said they couldn’t afford the cost, which includes travel expenses and chess camp admissions, so Martinez waived the fees, while a fellow student gave Adewumi a chess clock. People came together to help this young boy with big talent to succeed. It turns out that people love an underdog story, and love being generous to amazing kids like Adewumi.

Since his story first hit the news, Adewumi’s family has received an outpouring of support, including offers of a car, legal help, jobs, and even housing. A GoFundMe page for him and his family has exceeded its goal, and raised over $250K.

Adewumi may have been through a lot of rough days and tough times in his eight short years, but he has gained a support system and inspired the world. His life is worth living, and he is a valued human being, not because of his financial standing, but because he is a member of the human family — and has been since fertilization.