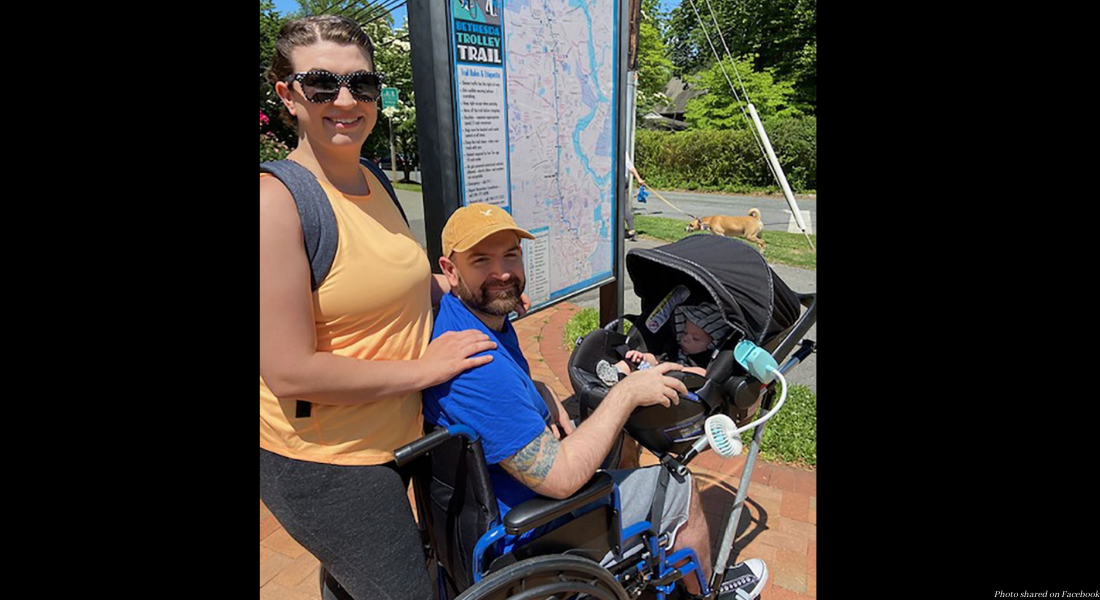 Jeremy King has a lot to be grateful for. In 2017, his baseball-sized cancerous brain tumor was successfully removed. Yet the surgery had some drawbacks, leaving him with physical challenges that made even going for a walk difficult. When he became a father, that issue became one of safety. And thanks to a group of high school students, King is able to be even more hands-on with his son.

After the surgery, King found himself with mobility problems, particularly with his balance. “Even going out on a walk is so incredibly difficult for me,” he told the Washington Post. Last year, he and his wife found out they were expecting a baby. They were excited, but also scared.

King’s wife, Chelsie, noted that a lot of parents take for granted the idea of taking their baby for a walk. “While he can walk, he can’t do so safely carrying a child,” Chelsie told Good Morning America. “So we jumped into, ‘OK, what do we need in order for him to parent safely?’ and honestly, not a whole lot came up — there’s just really not a ton of resources out there for disabled parents.”

Chelsie is a middle school drama teacher at Bullis School in Potomac, Maryland, and she spoke with Matt Zigler, who runs the school’s “makerspace,” a creative lab where students are encouraged to participate in hands-on projects. The lab has traditional tools, for wood and metalwork, and advanced technology, like 3D printers, laser cutters, CNC routers, and vinyl cutters, which Zigler urges them to use for “empathy-driven” projects in his class, called “Making for Social Good.”

“The goal of the class each year is to pick a person or an organization that we can design and build something for, go through a sort of empathy-driven process to understand what it is that they really need, and then also to design something that uses the tools in the lab and could hopefully be fabricated by other people with access to similar tools,” Zigler said in an interview with Fox News. Previous projects included durable metal information cards engraved with resources for people experiencing homelessness, and solar-powered cell phone chargers sent to Africa.

After Chelsie spoke with him, he asked her permission to get a group of 10 students involved. “It seemed like that would be a perfect project that would engage the kids and result in a successful end product,” he said to the Washington Post. The students were thrilled to be involved, and the class would end right around the Kings’ due date. “[I]t lined up very well, and gave the students the time crunch they needed to stay focused,” Zigler added.

The students used a wheelchair, two strollers, and a car seat, and began experimenting. They would try to sit and get around in the wheelchair while trying to figure out a way King could get around with his baby. The process, 15-year-old Evan Beach said, made them realize “the simple tasks that we take for granted.”

Eventually, they were able to come up with two separate designs created by two different groups. The first was something that could attach an infant car seat to a wheelchair, while the other could attach a stroller instead, for when the baby is older. Along the way, they often consulted with the Kings themselves. “I was ecstatic to connect with these students,” King said. “They raised important points that we hadn’t even considered ourselves.”

The students also made sure the designs could be replicated using a 3D printer, or by purchasing materials at a store like Home Depot, at a cost of less than $100. “One of the goals of the class is to make something that can be cheaply and easily replicated by anyone who has access to some tools and a little knowledge,” Zigler said.

Since refining the designs, they made the blueprints available online, as well as an instructional video — so other parents with disabilities can access and use them.

By the time the Kings’ son was born, one of the prototypes for the WheeStroll was ready. “It was emotional to see it all come together and [to] put Phoenix in it for the first time,” Chelsie said.

Since receiving it, the family has been able to go on multiple outings, including to places like the Bethesda Trolley Trail, which King had always hoped to visit with Phoenix.

“These students gave me the opportunity to do something I thought I would never be able to do,” he said. “I’m really grateful.”